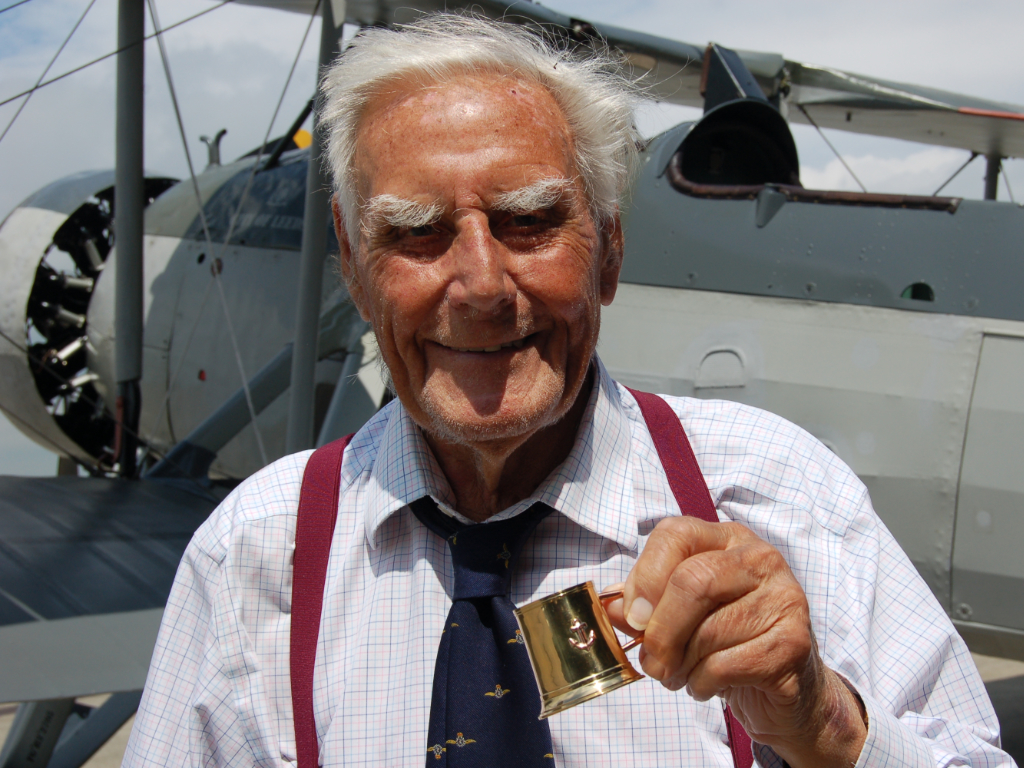 WW2 Swordfish pilot, Laurie Allum visited Navy Wings in June to celebrate his 101st birthday and relive his memories of flying the Swordfish in the Battle of the Atlantic protecting convoys from U-boat attack.

Laurie, who celebrated his 100th Birthday during lockdown last year, had hoped to visit Navy Wings for his milestone birthday in 2020 but the pandemic intervened.

“I was delighted when the Charity invited me to visit this year, to celebrate my 101st Birthday instead!” said Laurie.

“One of the things that has kept me going has been my daily tot of Rum!” continued Laurie. “We had the tot every day at 11.00 in the Navy and I have continued to enjoy my tot at 11.00 every day since! The North Atlantic in winter was no place to be at all. When we got back from long patrols in the Swordfish, flying in atrocious weather in open cockpits and sub-zero temperatures – our tot of Rum was a lifesaver!”

Laurie served on mine clearance operations in the Battle of the Atlantic before transferring to the Fleet Air Arm and flying Swordfish, Fulmars and Corsairs. 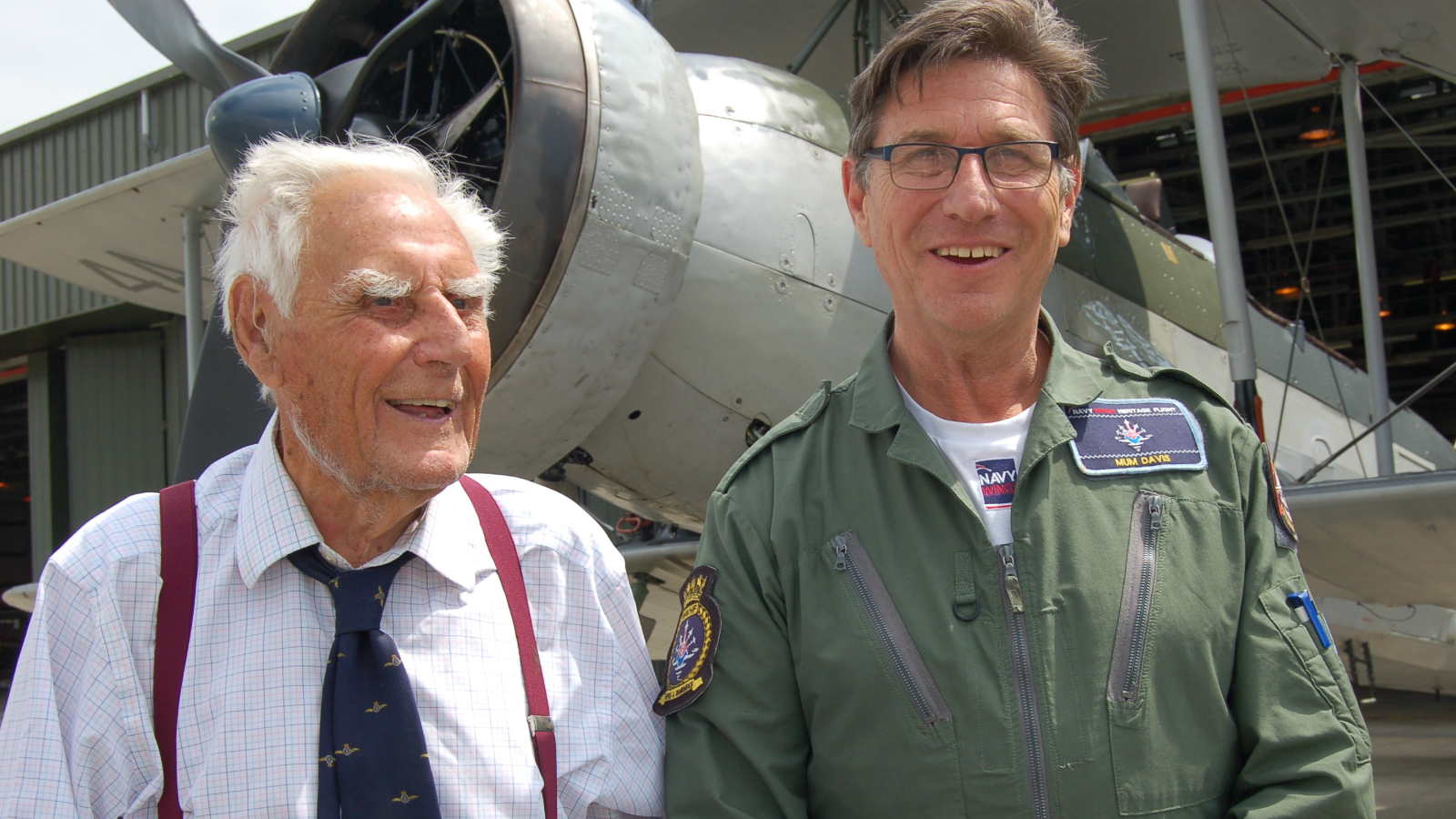 “Laurie was remarkable for his age. I felt very humble listening to him. To experience such a direct living link with the Swordfish flying in the Atlantic 80 years ago left a lasting impression on me” said Navy Wings Chief Pilot, Andy Davis.

“I flew Corsairs with 1835 Squadron in HMS Victorious,” said Laurie. “The Corsair was a wonderful aeroplane to fly but very difficult to land on a carrier. You couldn’t see beyond the nose. The US Navy had many losses of planes and pilots as a result. They had not adopted the Fleet Air Arm curved approach which Winkle Brown had perfected in trials. Even so there were a lot of casualties.”

“I also flew with a detachment of Swordfish operating out of Machrihanish flying long range patrols at low level looking for U-boat periscopes, spotting convoys and unescorted shipping.”

“Cargo and merchant ships from the US individually amassed 200-300 miles off the west coast of Scotland to be escorted by the Royal Navy to ports on the West coast, usually the Clyde and Liverpool. U-boats were lying in wait for them.”

“It was dreadful seeing merchant ships that had made it that far across the Atlantic, being picked off by U-boats and sunk – so close to delivering their vital supplies. We were losing ships at such a rate and the Swordfish patrols helped to stem that loss and turn the tide of the war,” said Laurie.

“Meeting Laurie was an inspiration” said Navy Wings Chief Pilot, Andy Davis. “It took real grit and determination to fly the Swordfish on those gruelling North Atlantic U-boat patrols. Searching for U-boat periscopes in a vast and featureless sea-scape was a great strain on the crews but they knew the country depended on them. It was a privilege to spend time with Laurie. He is remarkable for his age; and I felt very humble listening to him. To experience such a direct living link right back to the Swordfish flying in the Atlantic 80 years ago, left a lasting impression on me.”

Laurie who will be 101 on 14 July, was accompanied by his son, Richard, and son-in-law Hugh Penfold. 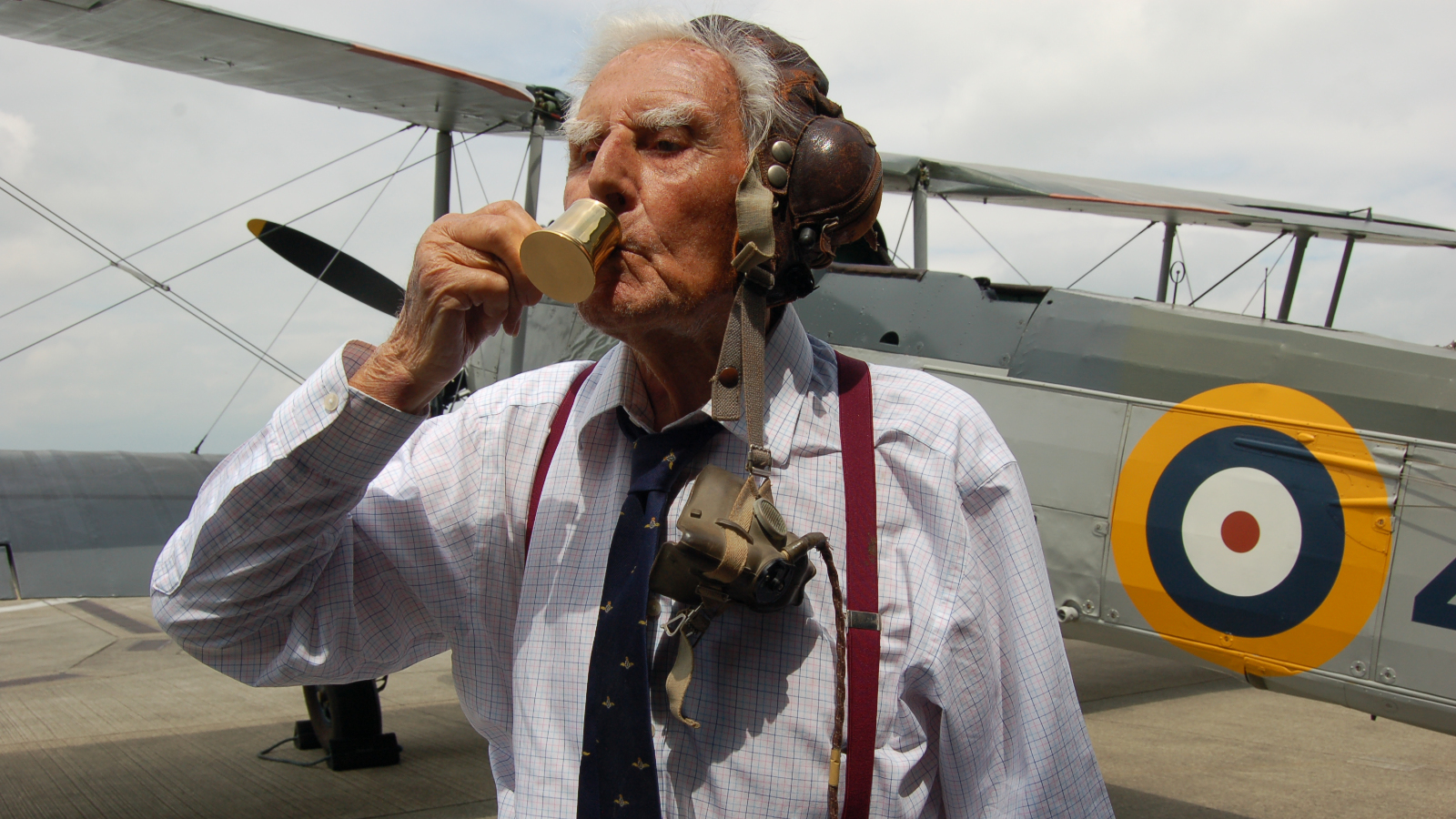 Laurie celebrated his 101st birthday with a birthday cake and a tot of Rum!