By Louise EvansFebruary 7, 2020No Comments

Navy Wings was delighted to host World War Two, D-day Normandy landing veterans, Corporal Reg Charles, 98 years old and Len Hobbs, 95 years old who joined the Royal Navy in 1943 and was drafted to HMS Fernie, a hunt class destroyer providing escort duties for merchant ships and then support for the allied landings in Normandy. Here are their stories.

Len Hobbs joined the Royal Navy in Jan 1943 reporting to HMS Ganges and six weeks later was offered a course on RDF which later became known as RADAR. After Ganges he moved to No.1 Radar Training School, HMS Valkyrie, located in Douglas, Isle of Man. A Vought-Sikorsky Chesapeake from 772 Squadron, Fleet Air Arm, was used to simulate air attacks and Len spent a further four weeks training there before being sent to HMS Pollux for two weeks training under sea conditions.  After this Len was sent to HMS Pembroke, a shore base at Chatham. Len then received an emergency draft to HMS Fernie, a Hunt Class Destroyer, which he joined at Sheerness Harbour on 25 May 1943.  HMS Fernie was used to escort merchant shipping through the English Channel and the North Sea and was a Devonport based ship, with Len being a Chatham rating he transferred to Devonport three months later and on the 5 Jun 1944 Len found himself in the Channel as part of the D-Day Invasion Fleet and on the 6 Jun was just off Gold Beach.  During this time the Fernie escorted 24 convoys back and forth.An event during his second convoy in Jun 1944 has stayed with Len ever since.  HMS Halstead, a Captain Class Frigate, was torpedoed on the 11 Jun off Gold Beach blowing off her bow.  The Fernie was dispatched to pick up survivors and tow her back to England.

After the Normandy Campaign, HMS Fernie continued with escort duties and patrols along the Channel and North Sea.  At the end of the war she docked in various ports in Holland and Germany upon which Len was sent to HMS Drake, Devonport, before being demobbed in July 1946.

Corporal Reg Charles joined the army on 2 Jan 1942, a month before his 19th birthday.  Reg’s initial training took place in Cowley Barracks and Slade Camp in Oxford and in Jun 1942 and then posted to the 5th Battalion Oxford and Bucks Light Infantry in Northern Ireland.  The battalion returned to England in Jan 1943 and continued infantry training until May 1944 when the Battalion was disbanded, and the men were sent to other Battalions in various parts of the World.  At that time, Reg was a storeman and had the task of disposing the transport stores and vehicles. This took several weeks and towards the end of Jul 1944 Reg was eventually posted to the 1st Battalion Oxford and Bucks Light Infantry, landing in Normandy at Arromanches where he joined the Battalion, part of the 53rd Welsh Division, which was in action near the city of Caen.

Following the overthrow of the Germans in Caen the Battle of Falaise, the next big action was clearing Pierefitte of the enemy. During Reg’s first month in France he experienced the horrors of being an infantry soldier on foot, digging fox holes to survive in, driving a Bren gun carrier (a tracked armoured vehicle) and also clearing causalities from the front line by driving a jeep.  The Battalion left France at the end of August and arrived in Antwerp about 10th September. After a few days in the dock area of Antwerp the battalion was moved into Holland to Oirschot near Eindhoven and then to Nijmegen and Hertogenbosh and then in the Roermond area for most of November and on Christmas Day 1944, Reg and his battalion were  dispatched to the ‘Battle of the Bulge’ in the Ardennes.  After about three weeks in the snow troops were moved to St Oedenrode hear Eindhoven and at the beginning of February they prepared for the Battle of the Reichswald Forest.  The battalion spent most of the month in the forest in appalling conditions and the battalion ended up in Germany in March 1945.  The troops crossed the River Rhine on a pontoon bridge at the end of March.

On entering the final phase of the Battle for Germany Reg notes it was a very different form of warfare to Holland and the troops missed the welcome from the civilian population.  During the next five weeks they advanced through Northern Germany crossing rivers and canals and engaging in various small battles and dealing with German prisoners of war, finally entering Hamburg on 4 May 1945 and the cease fire commenced at 0800hrs on 5 May 1945. Hamburg is 620 miles from London, and it took Reg 3 years 4 months to complete the journey travelling by train, bus, bicycle, landing craft, motor vehicles ranging from jeep to heavy lorries, tracked vehicle and many miles on foot.

Reg’s war ended in Hamburg, but continued to Berlin where he was eventually sent back to England in 1946.  Reg lost friends and comrades and will always remember those who did not return, and memories are still with Reg even at the age of 98 years.

Navy Wings aims to inspire future generations and to fly heritage aircraft as a focus of remembrance and it was a great honour to host Len and Reg in the Navy Wings heritage hangar. 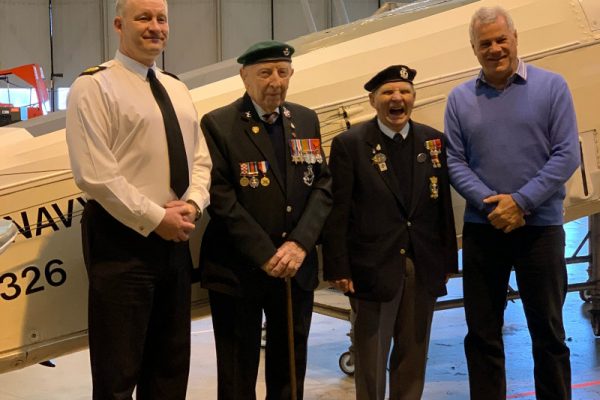 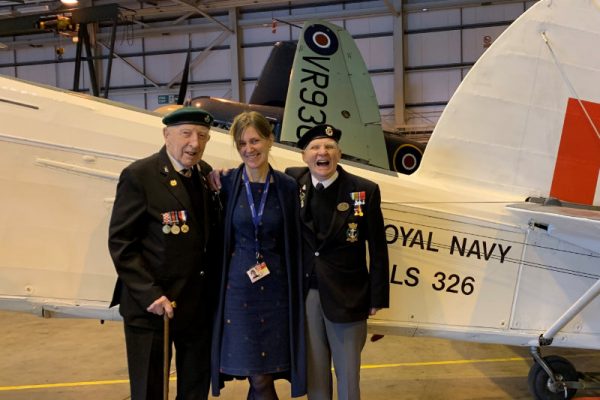 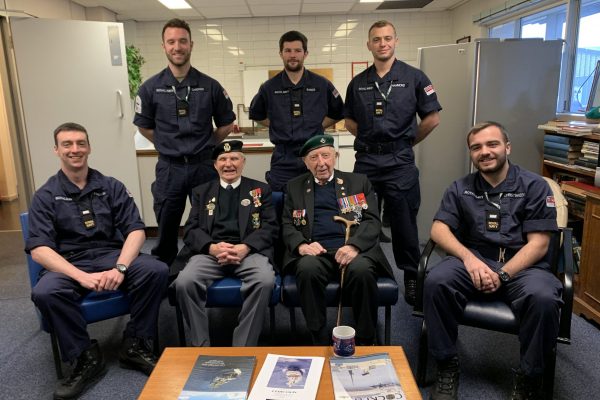