The Royal Canadian Navy has announced that its sixth Arctic and Offshore Patrol Ship will be named in honour of Lieutenant Robert Hampton ‘Hammy’ Gray, a Fleet Air Arm Victoria Cross hero of the Second World War.

Lieutenant Robert Hampton Gray VC DSC RCNVR, a Canadian who served as a pilot in the Fleet Air Arm, flew Corsairs from HMS Formidable in the war in the Pacific in 1945.

Lt Gray was awarded the Victoria Cross posthumously for great valour and determination in carrying out daring air strikes on the Japanese destroyer HIJMS Amakusa. On 9 August 1945, as Senior Pilot of 1841 Naval Air Squadron, ‘Hammy’ led his two flights of Corsair aircraft to attack naval vessels in Onagawa Bay. Diving at 400mph from 10,000 feet, he led the attack run, flying into intense anti-aircraft fire from shore batteries and the five warships in the bay. Despite being hit almost immediately and with his aircraft on fire, and one bomb lost, he pressed home his attack achieving a direct hit on the destroyer escort Amakusa with his remaining bomb. Seconds later, trailing smoke and flames, his Corsair plunged into the sea with the engine still at full power. He had no chance to bail out. 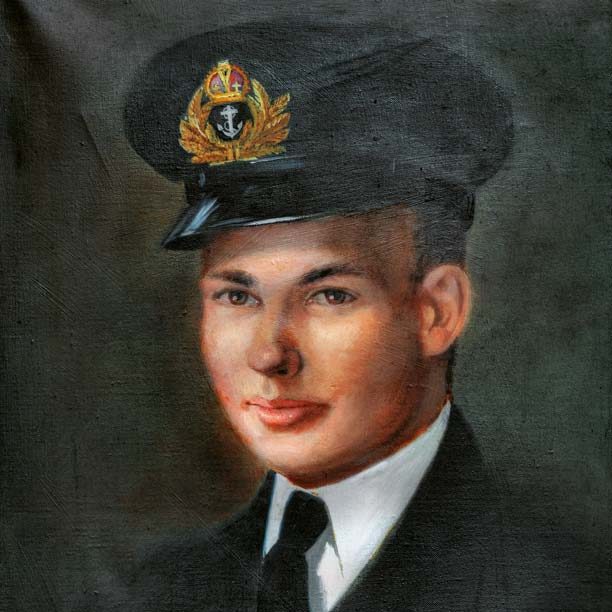 ‘Hammy’ Gray had previously been awarded the DSC for his gallantry and skill strafing the German battleship Tirpitz and was well known by his fellow naval aviators for his courageous leadership and brilliant fighting spirit. He was recommended for the Victoria Cross for his action on 9 August and its posthumous award was announced by the Admiralty on 12 November 1945.

“Hammy Gray was one of only two Fleet Air Arm aviators to be awarded the Victoria Cross in the Second World War and his courageous leadership and fighting spirit continues to inspire the Fleet Air Arm today” said Sue Eagles, Communications Director Navy Wings.

“Hammy had already survived the Kamikaze attacks on HMS Formidable and throughout July 1945 had led repeated strafing missions against enemy airfields,” continued Sue. “When you think about it, 9 August 1945 was the day of the atomic bombing of Nagasaki, three days after Horoshima and within 5 days of Japan’s surrender. As the fighter bombers of 1841 Squadron were taking off from Formidable’s Flight Deck, a last minute change of orders was par for the course, another element of the day Hammy would have just taken in his stride. It is a great honour for the Royal Navy and Fleet Air Arm that the legacy of Hammy Gray and Britain’s great naval aviation heritage will live on, not just through our flying aircraft but also in a fine new Royal Canadian Navy ship.”