HRH Prince Michael of Kent GCVO has expressed his respect and admiration for the work of the Charity, Navy Wings, in keeping the Nation’s historically important naval heritage aircraft flying.Prince Michael, who was the Charity’s Guest of Honour at the Shuttleworth Fly Navy Air Show on 3 June 2018, showed great interest in the Navy Wings collection and the Charity’s future development plans as it prepares to take on the aircraft of the Royal Navy Historic Flight next year.

Voted ‘Top Air Show of the Year’ in 2016, this year’s Fly Navy retained its magic with the nostalgic 1940s atmosphere of Old Warden Aerdrome providing a perfect showcase for our Naval and Maritime Aviation Heritage. The Fly Navy Heritage Trust and Shuttleworth Collection share the same ethos that ‘Everything Flies’ – the aircraft are not museum pieces. Working in close association, the two Charities secured a memorable line up of historic naval aircraft telling the story of naval flying from the 1910 Deperdussin, to the magnificent piston fighters of the 1950s, with many of the aircraft being the only flying examples of their type in the world.

“Fly Navy is the only air show where the flying display is almost exclusively Naval aircraft,” said Sue Eagles, Communications Director for Navy Wings. “From the Swordish, Catalina, Grumman Wildcat, Sea Hurricane, Corsair, Sea Fury, Wasp and Gazelle, to the present day, Merlin, it’s rare to see so many naval aircraft together in the skies of the UK.”

The flight line walk was also unprecedented this year with the Bristol Scout, three AVRO 504Ks, the Fairey Swordfish and Hawker Sea Hurricane, all classic naval aircraft of their era, positioned in front of the Navy Wings Ambassadors’ Marquee. To see three AVRO 504s together is a particularly rare occurrence, and in this Centenary year of the End of the First World War, was a deserving tribute for such an outstanding aircraft. Prince Michael met with aircraft owners and aircrews, showing great interest in the history of each aircraft and the technology, innovation and achievements of naval flying. Two of the three AVRO 504Ks, are owned by Navy Wings Ambassadors. AVRO 504K G-EBHB owned by Tom Harris, is an original AVRO 504K built in 1918 and flying again a hundred years later. The second Navy Wings AVRO 405K is a faithful replica, built as a tribute to the type which carried out the first bombing raid in history, made by the Royal Naval Air Service on the Zeppelin sheds at Fredreichshaven in 1914. It is owned by Eric Verdon-Roe, grandson of Sir Alliott Verdon-Roe, founder of AVRO.

Prince Michael praised the AVRO 504 for the impact and influence it had in the First World War and paid tribute to the Royal Naval Air Service which fought with courage and distinction on all fronts, winning two VCs. 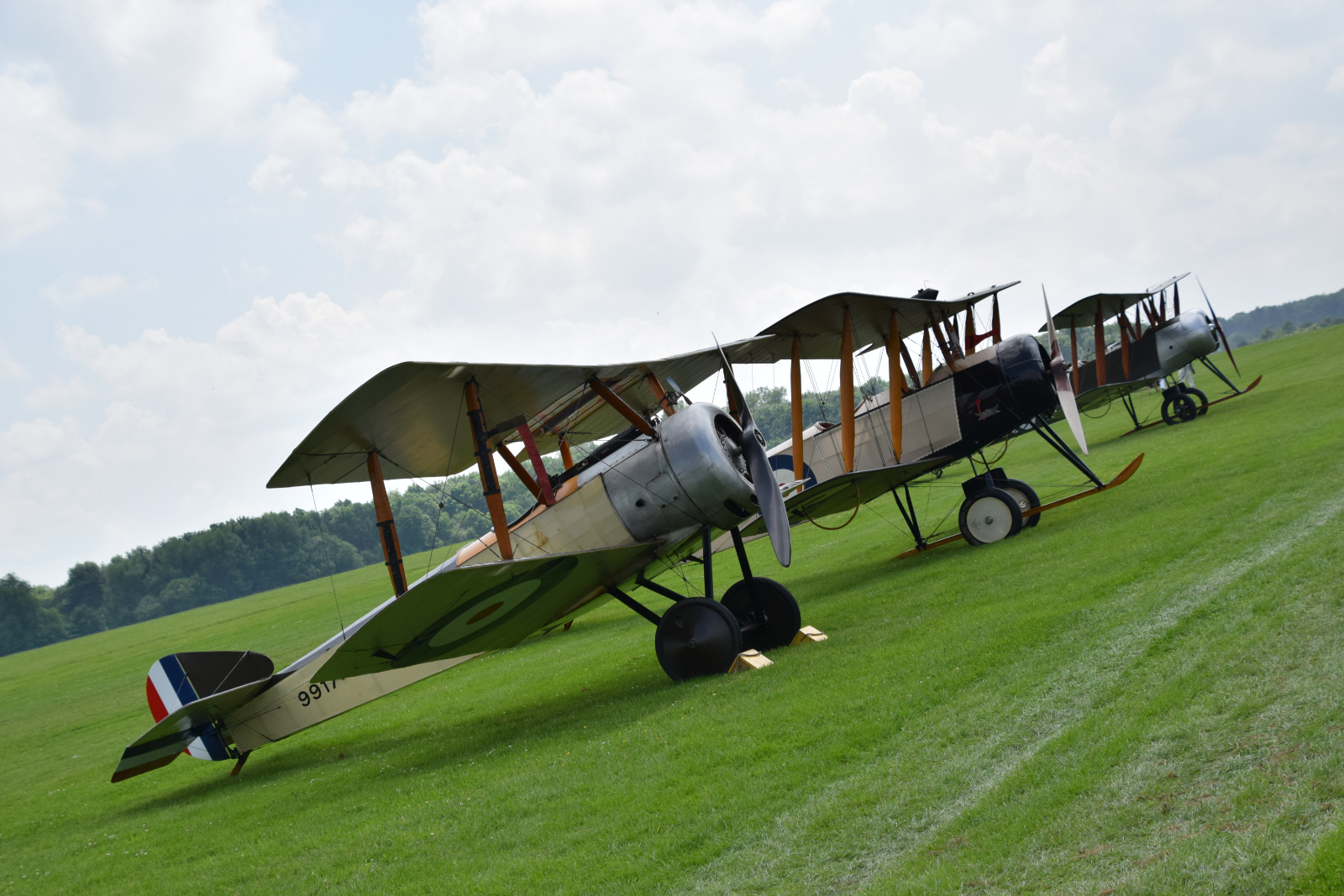 Sponsored by Navy Wings, the impressive Catalina G-PBYA flew early in the display, demonstrating its amphibious capability by showing off its retractable floats and undercarriage.

Westland Wasp G-BYCX was next up, representing the Royal Navy’s small ships flights from the 1960s-1980s, including the South Atlantic, followed by the Hawker pair, the Nimrod and Demon and a succession of historic naval trainers including the Miles Magister, Avro Tutor, Tiger Moth and Chipmunk.

Jointly sponsored by several Navy Wings Ambassadors, the Fighter Collection’s Goodyear FG-1D Corsair, was a special treat. This large powerful fighter, which was the first Navy fighter to reach speeds of over 400 mph, gave a very impressive display, also landing for the first time on the grass airstrip at Old Warden.

The Corsair was joined by the Grumman Wildcat, the first modern fighter available to the Fleet Air Arm in 1940 and a favourite of Captain Eric ‘Winkle’ Brown. As the pace and excitement mounted, formation displays with the Corsair, Wildcat, Sea Hurricane and Spitfire (standing in for the Seafire) followed.

For the Charity’s Ambassadors watching from the Navy Wings enclosure on the flightline, the display they had all been waiting for was the Navy Wings Sea Fury T20, providing an opportunity to see their support in action. Many had contributed to the £300,000 restoration costs of her Centaurus engine. Flying in with a fast and spectacular low level pass, Lt Cdr Chris Gotke AFC demonstrated the beauty, power and grace of this ultimate piston engine naval fighter with a superbly flowing aerobatic display. 2018 is Chris’ 15th year as a naval display pilot and he is undeniably at the top of his game.

Early naval aviation was very well represented and movingly so, with the Royal Navy Historic Flight Swordfish W5856 also giving a star performance. The oldest, and only, flying Swordfish Mk1 in the world, this heroic torpedo bomber saw active service in all theatres of the Second World War. With her ensign flying in proud salute, it is easy to see why this iconic biplane is a living legacy to all who have served in the Naval Service. The SwordfIsh was joined in the display by the North American T-6 Harvard, owned by Navy Wings Trustee and Ambassador, Tim Manna.

A flypast from the Battle of Britain Memorial Flight AVRO Lancaster, at one time flown by 780 Naval Air Squadron, complemented the Maritime theme. “The day was a tremendous success, fulfilling the Charity’s aims to educate, inspire and remember in a very powerful way” said Sue

In a fitting finale, in wonderful evening light, the Shuttleworth Edwardian aeroplanes, the Bristol Boxkite, Avro Triplane, Blackburn Monoplane and the oldest original aircraft and engine combination flying anywhere in the world, the Deperdussin, gently took to the skies.

“Nothing quite prepares for this truly remarkable sight” continued  Sue. “To step back in time to the dawn of naval aviation and imagine the Box kite flying at RNAS Eastchurch is deeply moving. The support of the Royal Navy at Shuttleworth with a Merlin Mk 2 from 820 Naval Air Squadron, the lead Squadron in HMS Queen Elizabeth, made the link perfectly from our heritage to current operations, and the future.” 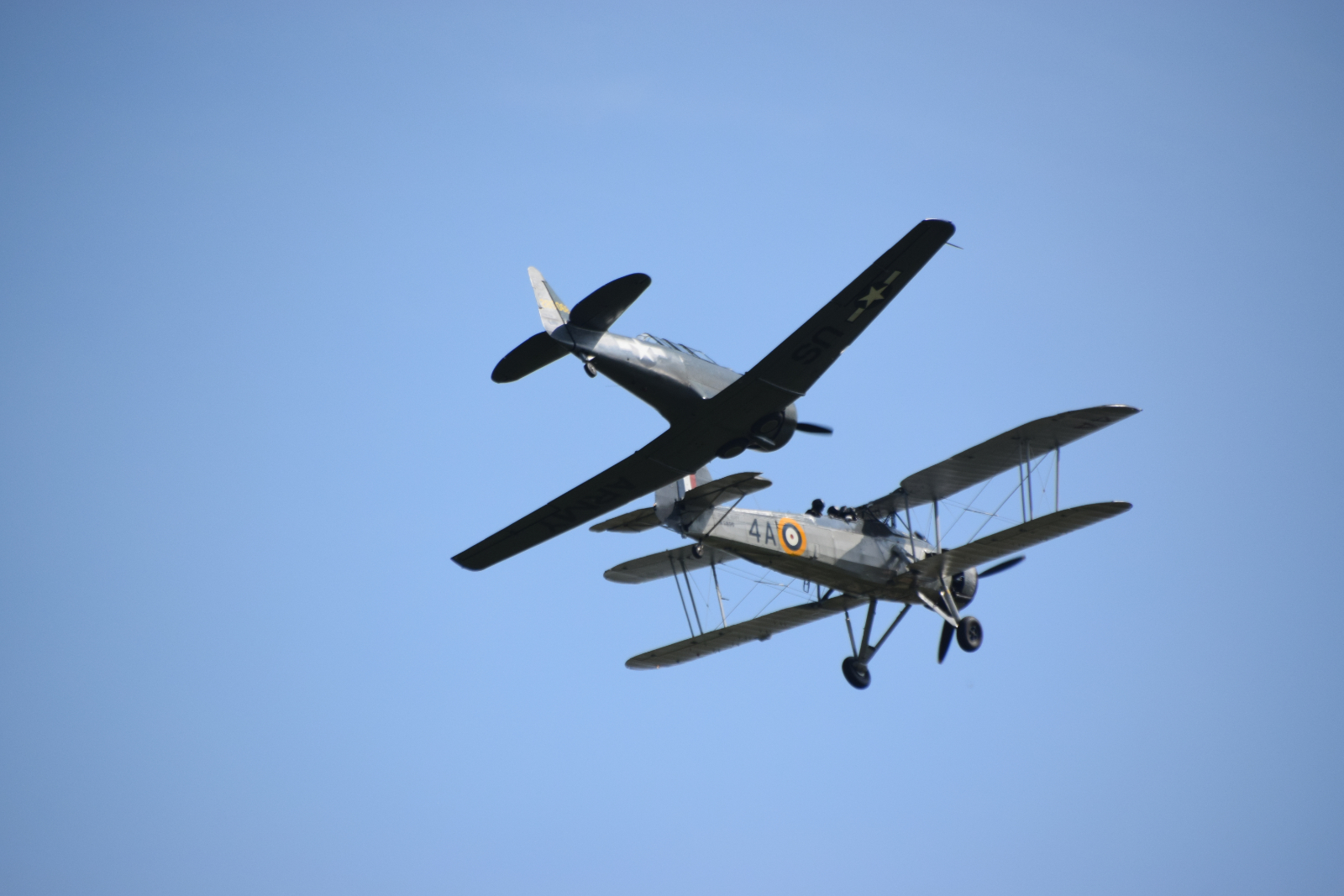 Navy Wings was delighted to welcome members of the Fleet Air Arm Squadron into the Ambassadors’ Marquee during the afternoon. The Fleet Air Arm Squadron is a non-military organisation that links former, current and future naval aviators whose interests support all aspects of naval flying, particularly preserving our heritage. Among them were Dick Roberts (pictured left) and Cdr John Ford RN (right).  John, who saw active service during the Suez Campaign and was Commander (Air) RNAS Yeovilton and Commander (Air) HMS Ark Royal said: “I enjoyed the day enormously’. 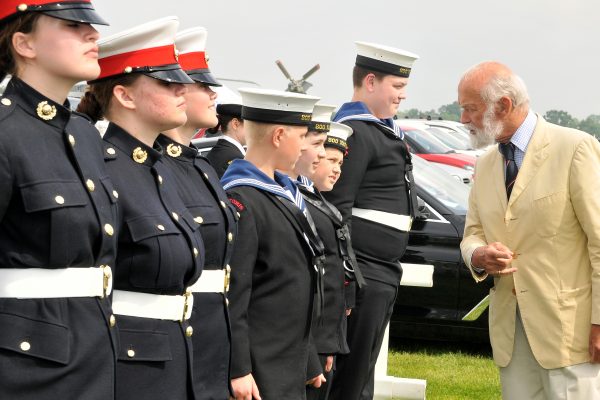 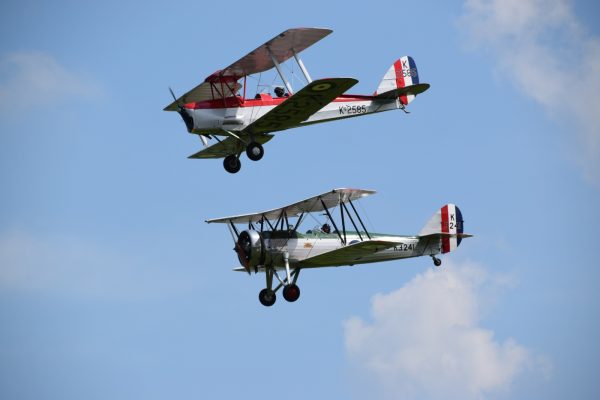 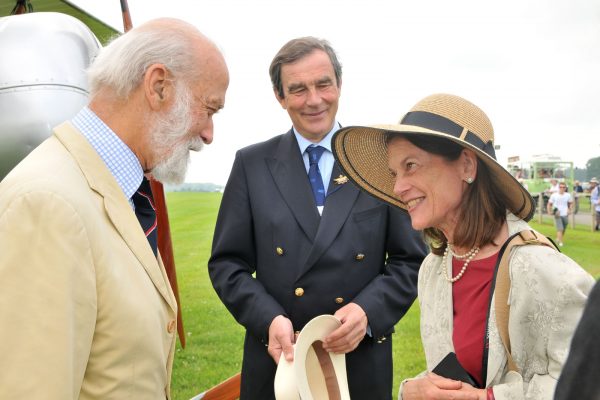 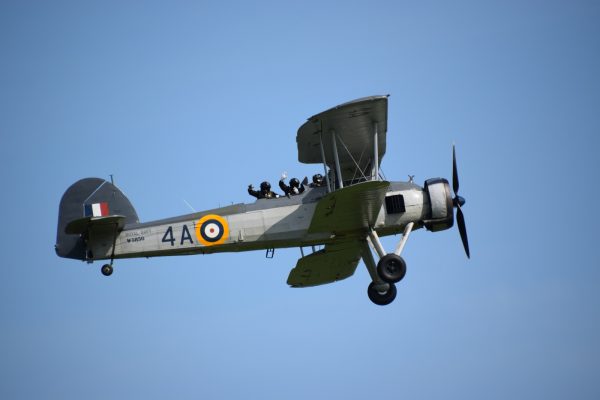 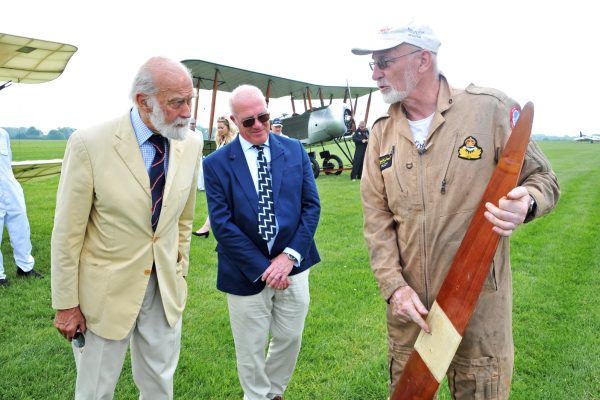 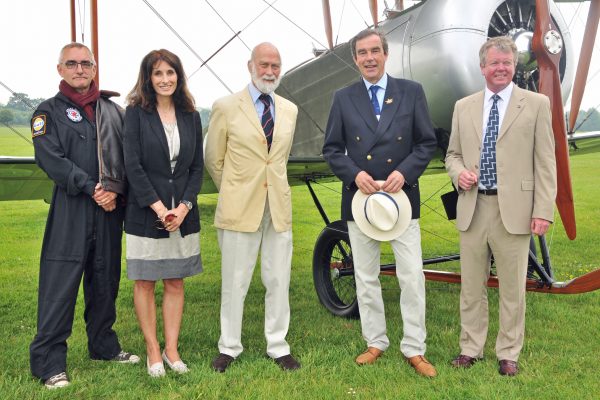 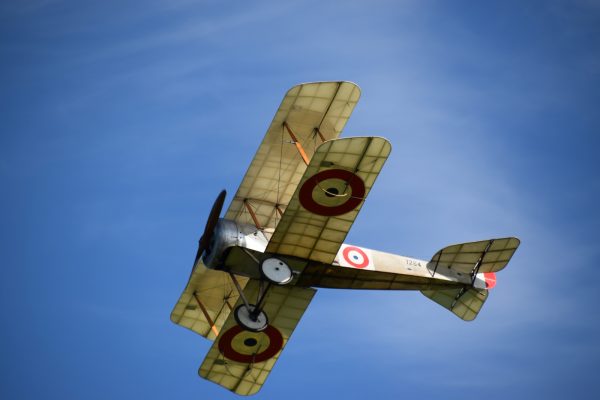 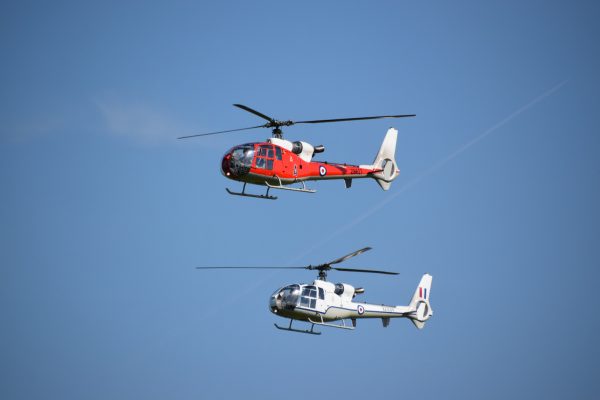 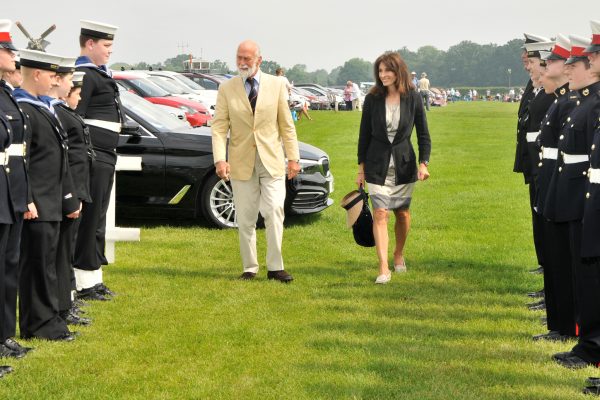 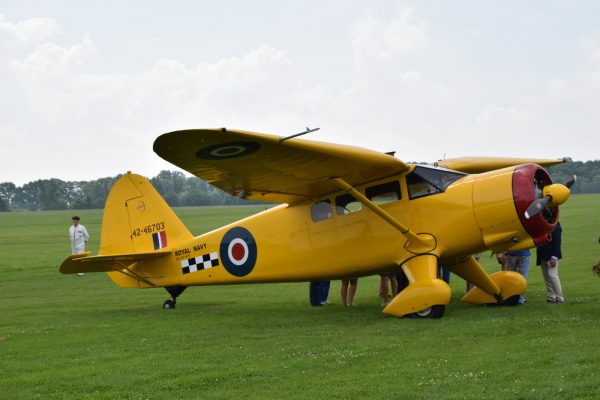 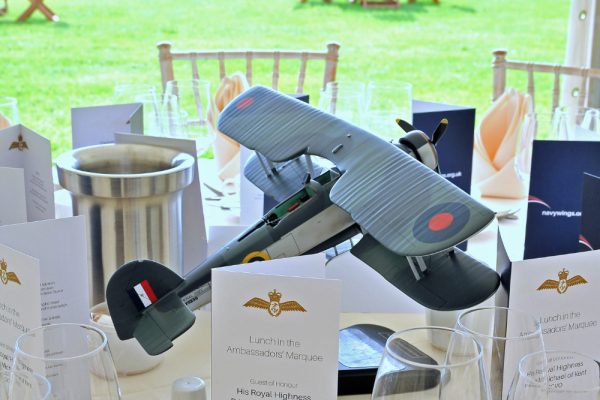 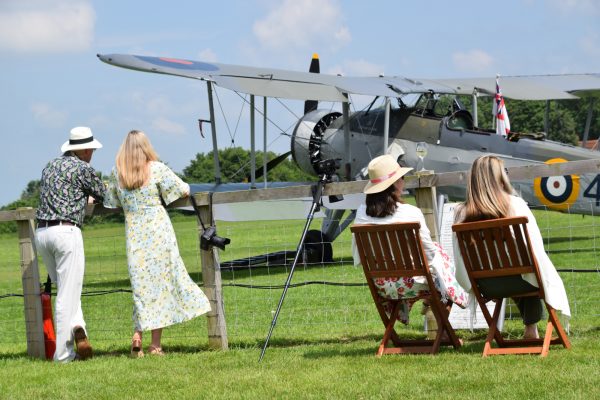 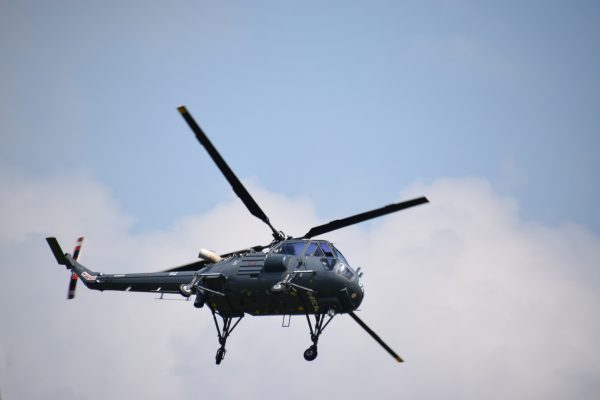 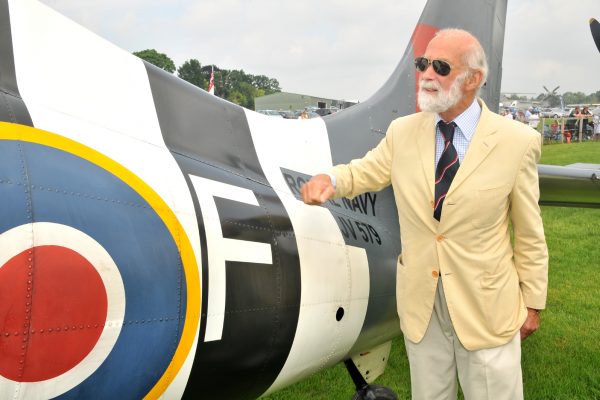 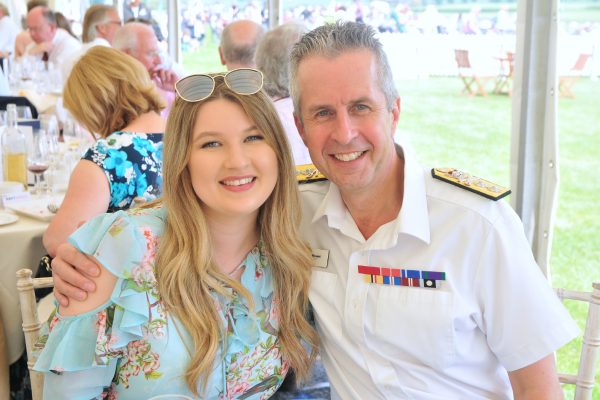 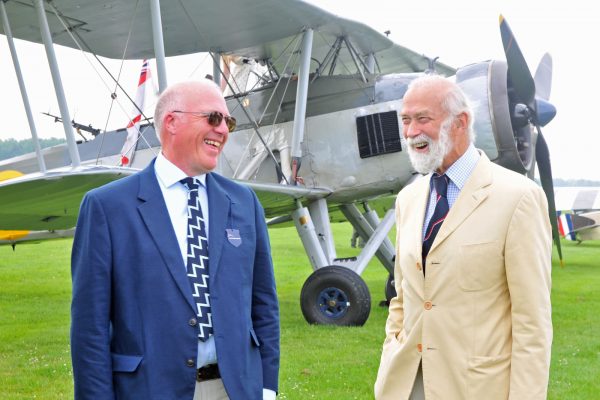 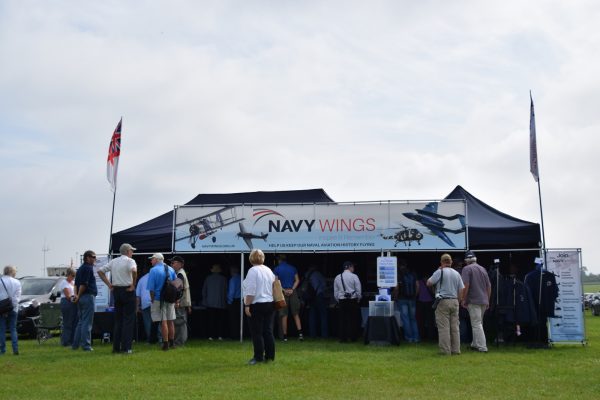 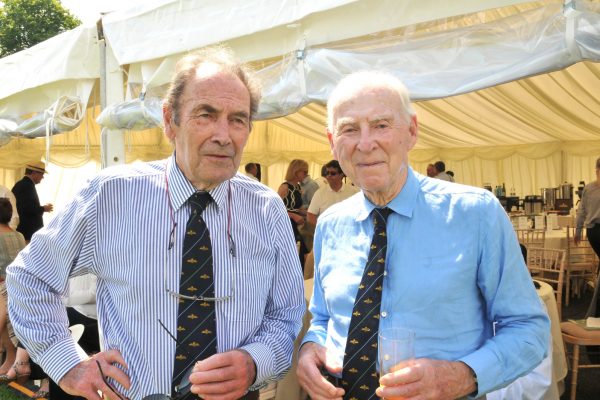