Navy Wings is delighted to introduce two additional Sea Fury Pilots to the Navy Wings Team, Dave Mackay and Bill Dean. Our two new pilots are no strangers to Fleet Air Aircraft and have extensive experience flying heritage aircraft. Read more about their flying backgrounds below. 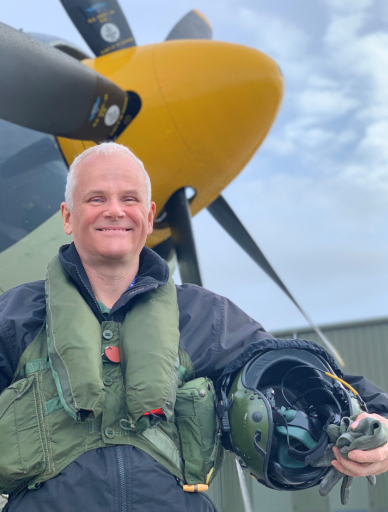 Dave Mackay grew up in Perthshire and Edinburgh attended George Herriot’s School where he was a keen cadet in the CCF Army section. He learned to fly at 18 through a Royal Navy flying scholarship on Cessna 150’s at the Leicestershire Aero Club. The Navy message must have stuck because Dave joined the Royal Navy full time in 1979 and after Dartmouth went through flying training on the Bulldog, Jet Provost and Hawk; very much in the RAF system but destined for Navy Sea Harriers. He was awarded his wings at RAF Valley in 1982 then followed some time on the Hunters at Yeovilton came tactical training on the Hawk at RAF Chivenor, the Harrier GR3 at Wittering and finally the Sea harrier with 899 Naval Air Squadron, graduating as an RN fighter pilot in 1984. Initially Dave served with 800 Naval Air Squadron embarked in HMS Illustrious operating on shore and afloat all over Europe, in the USA and in Asia and Australia before being selected for instructor duties and appointed to the joint RN Elementary Training Squadron, flying Bulldogs and teaching many of today’s top Helicopter and Harrier Pilots. Back once more to the SHAR in 1989 he spent a tour with 801 Squadron embarked in HMS Ark Royal and then on to 899 Squadron as an Instructor. Dave remained there, improving his lot with promotion to Senior Pilot, until July 1994.

During this tour Dave joined the Royal Navy Historic Flight as a Firefly Pilot, flying two seasons before an exchange tour took him to America and three year’s service with the US Navy on the F/A18. Whilst in the States he flew all over the USA and Canada and operated from eight different aircraft carriers, but unlike in the RN, he had to revert to catapults and arrester gear and a dry bar after night flying!Dave and family returned to the UK in 1997, and he soon got used to the SHAR routine again as the Senior Pilot of 800 Squadron, flying tours over Bosnia and Iraq embarked in HMS Invincible. In 1998 he re-joined 899 Squadron as the Commanding Officer and at the same time re-joined the Historic Flight as a Swordfish Pilot and the Flight QFI.

In 2002 after a very rewarding 23 years RN service Dave decided it was time to move on and left the Navy initially working as an advisor on the team designing the next generation of RN aircraft carriers before starting a career in the airlines. He first trained on the Canadair Regional Jet but was made redundant before commencing line flying! Luckily he quickly found a place with British Mediterranean Airways who were expanding their fleet and he worked for them as an Airbus 320 & 321 Captain flying to the Middle East, Central Asia and North Africa for six years. Eventually BMed were taken over by bmi Airlines and Dave decided it was time for a move so he landed a job flying an Embraer 135 ‘Legacy’ executive jet with TAG Aviation UK at Farnborough. In 2010 he was promoted within the company to the role of Chief Training Captain and re-trained to fly the Challenger 605 executive jet for 18 months before moving back to the Embraer Legacy again and qualifying as a Type Rating Instructor.On the fun side, he flew the Navy Wings Sea Fury FB11 from 2004 for several seasons. Dave is also Chief Instructor of the ‘civilian’ Yeovilton Flying Club. He has additionally flown for Kennet aviation for many years, on the Seafire and Skyraider and T6. He lists over 65 types and 9400 hours in his logbook from Swordfish to Sea Harrier and Cessna 120 to Airbus 320. In 2012 he joined the team of instructors at the Boultbee Flight Academy teaching on the Chipmunk, Tiger Moth, Harvard and the Spitfire and we are delighted that Dave will be back in a Sea Fury, flying the Sea Fury T20 during the 2020 season. 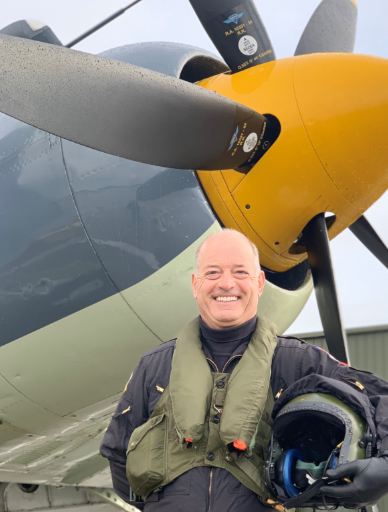 Bill grew up mainly in Africa and USA before a family move to the UK at the age of 17. He went on to study Pure Mathematics at London School of Economics and Political Science before joining the Royal Navy as a pilot in 1984. Bill flew operational roles in the Royal Navy, firstly as a search and rescue helicopter pilot in Scotland and then, after fast jet training, as a fully operational Sea Harrier FRS1 pilot from HMS Invincible.

After completing the post graduate RAF GD Aerosystems Course, Bill was Flight Commander of the Sea Harrier OEU during operational test firings of the AMRAAM AIM120C from the upgraded Sea Harrier F/A 2. Bill was then appointed Senior Pilot 800 NAS flying the Sea Harrier F/A 2 from HMS Invincible during operations world-wide. After this operational leadership tour, he worked 6 years in the USA, firstly flying F/A 18C Hornet as an instructor at Virginia Beach and then flying the F/A 18C and AV-8B as an Operational Test Director at the United States Navy’s weapons test centre at China Lake California. His final two years in the USA were as the UK Test and Evaluation Lead at the F35 joint project office in Washington D.C.

On return to the UK in 2006 he spent his final tour in military service as Deputy Force Commander Joint Force Harrier at RAF Cottesmore including a 5 month appointment as Acting Station Commander. Bill then initially worked as an independent aerospace consultant working on F35 Joint Strike Fighter projects and other contracts before joining Rolls-Royce plc in 2011 as Chief Pilot (Defence Aerospace) based in Bristol.

From the 2020 display season, Bill will fly the Sea Fury T20 for Navy Wings Heritage Flight. Bill is a qualified CAA display pilot and regularly flies the Rolls-Royce Griffon powered Spitfire Mk XIX PS853 at corporate events and airshows around the UK. Bill is also a part-time instructor with the Boultbee Flight Academy flying the academy's Mk IX Spitfires.

Bill completed an MSc in Safety and Human Factors in Aviation from Cranfield Safety and Accident Investigation Centre in 2019.