News from the Heritage Hangar

At the beginning of 2018 the Navy Wings fleet in Hangar 15 consisted of two Swordfish, one Sea Fury, a Chipmunk and the Sea Vixen.  Swordfish W5856 is almost 100% serviceable, the Sea Vixen a long way from airworthy and the others in various states between, so plenty of work ahead for the Yeovilton maintenance teams.  The Twin seat T20 Sea Fury is away at North Weald for its contracted out winter maintenance and will return for the main season.  The following is a brief update of engineering work on each aircraft through the year.

The aircraft is largely intact and awaiting an overhauled engine and various cable and hose terminations. The engine, which is with Deltair in Hampshire, is awaiting new pistons and valves. On receipt they will recommence the engine build.  In the meantime periodic maintenance checks continue on the aircraft including extensive X-Ray NDT, facilitating the conversion of X-Ray reference data for Swordfish airframes to a digital format.  Fortunately the NDT did not show up any problems but the Cabane struts that attach the upper wing to the fuselage are due for replacement so the wings and undercarriage will be removed and replaced before Christmas making her ready to receive her engine next year. 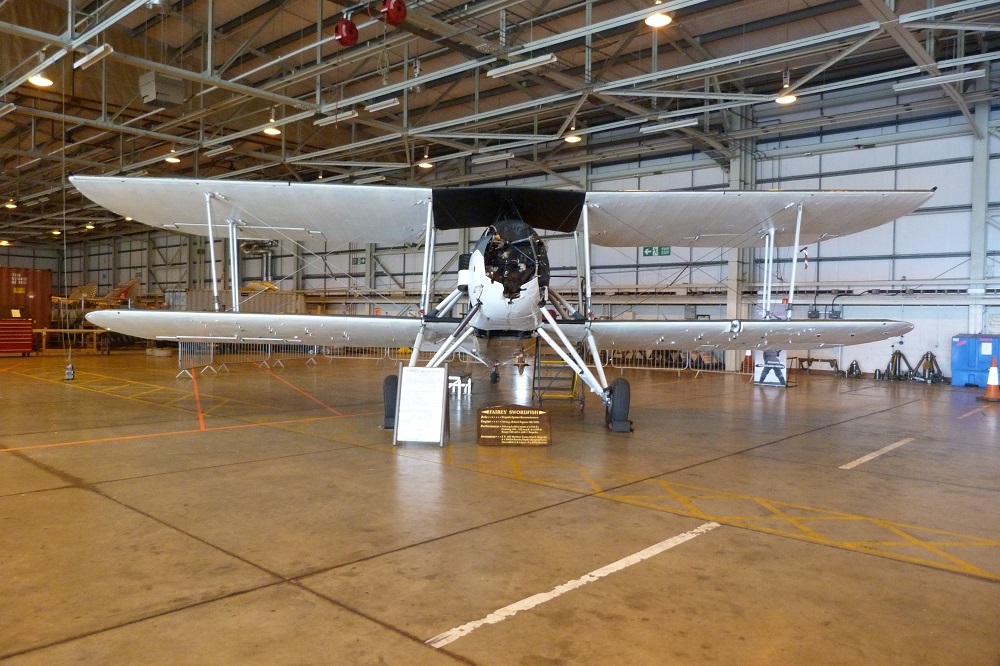 The Swordfish started 2018 awaiting a couple of replacement oil system hoses but had a good dozen flying hours before a partial engine strip to examine the pistons and new valves. The available Pegasus pistons were kept to run W5856 whilst an improved design, following minor cracks found on some of the existing sets, were manufactured for both Swordfish. In March ground running proved all systems apart from the pneumatic wheel brakes which were not holding adequate pressure.

The following month, check test flights were completed and W5856 declared fully serviceable with several hours to run before a piston inspection. A troublesome brake pressure issue was initially tackled by stripping, testing and cleaning its small compressor but finally solved with the discovery of a pin-hole leak in the top of the intermediate pressure bottle, which was replaced. The test flights also served to prove the recently installed Powered Flight Alarm system (PFLARM).  These trials were conducted against a 727 Sqn Grob 115E Tutor, also based at Yeovilton, to verify that both aircraft could detect each other using their IFF based electronic collision avoidance systems.

In July the engine was partially stripped for a routine piston inspection and one of the nine was replaced as a small crack was found in the oil scraper ring groove. This was consistent with previous experience and should be solved with the installing of the new design of piston which is closer to the original 1940’s variant.  The engineering team were particularly pleased to find that the new ‘soft stemmed’ valves installed last winter were in good condition.

In August W5856 remained fully serviceable and was flying the white ensign at various displays.   She stopped flying in September to allow a fit of new VHF radios with 8.33 Khz spacing. The fuselage was de-panelled to gain access to the avionics below the cockpit and the various cable runs between control boxes and ariels. Some life expired fuel and oil rubber hoses were also replaced.  Soon she will undergo an Airworthiness Review which is an annual check by the Royal Naval staff, covering the physical state and engineering documentation, followed by a Maintenance Test Flight.  This should leave her ready for transfer to the Civil Register next year.

The Chipmunk underwent an eight yearly Major Inspection at the beginning of the year. The engine was removed and its two support frames inspected for cracks by Magnetic Particle Inspection. The freshly painted light green frames were reunited with the airframe by new tapered bolts as the old ones were life expired. 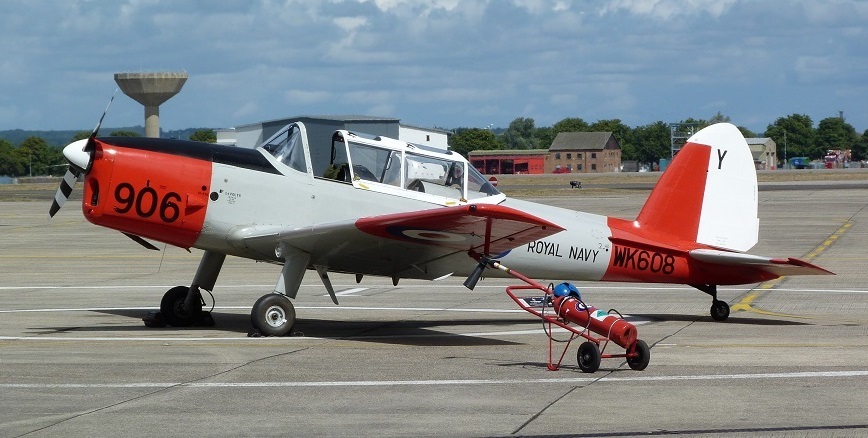 Many airframe voids were inspected using a fibre optic borescope which affords the ability to be steered into awkward spaces, take photos and also measure distance between nominated points. Various parts of the engine were cleaned and inspected and new filters fitted to the fuel and lubrication system.  The crankcase cover was removed as part of this process and two studs, which also secure the upper carburettor support, were found to be sheared and were replaced.  The rebuild finished with extensive X-Ray inspections of the tail plane and the supporting struts either side of the tail wheel as well as the propeller hub.  Many life-expired cables were replaced and rigging checks carried out.  All the instruments were bay serviced and refitted and WK608 took to the air again in freshly painted red panels.  She remains fully serviceable and ready for transfer to the Civil Register in the New Year 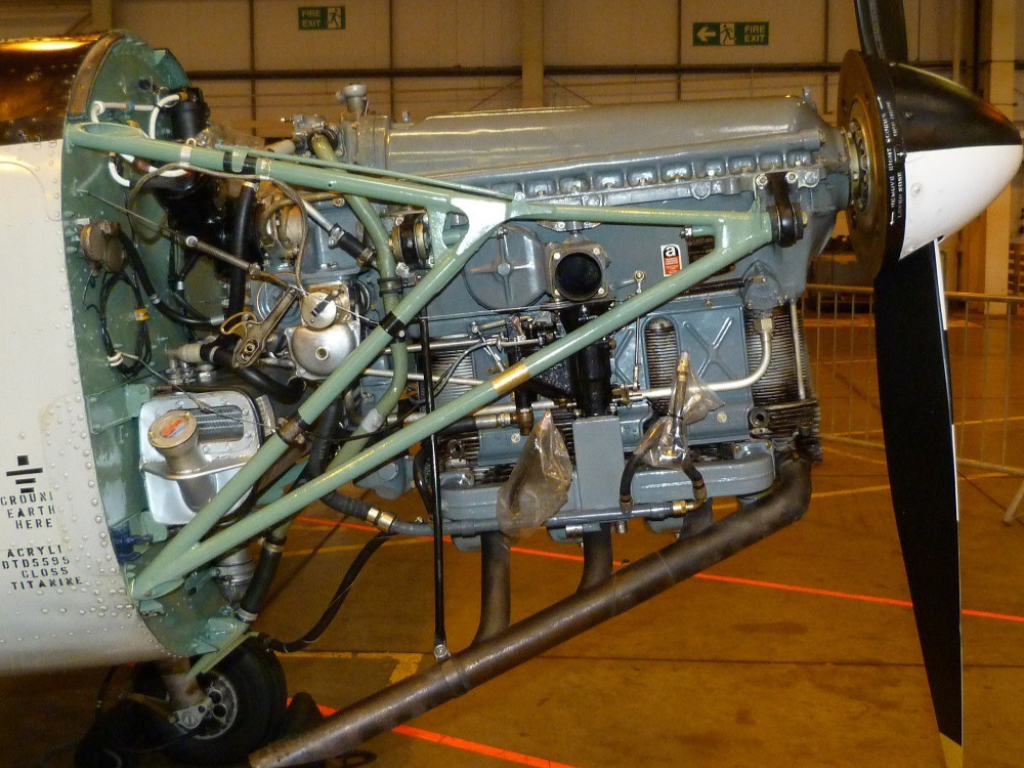 In early April VX 281 underwent a series of test flights, flown by the RNHF CO, following winter maintenance at North Weald airfield.  She flew back to RNAS Yeovilton ready for the display season. In June after flying at various events VX 281 developed an oil leak.  The problem was traced to the prop shaft ‘viton’ rubber seal which normally keeps the engine oil inside the reduction gearbox on the front of the engine.  To get at the seal the spinner, prop assembly and pitch control mechanism had to be removed. 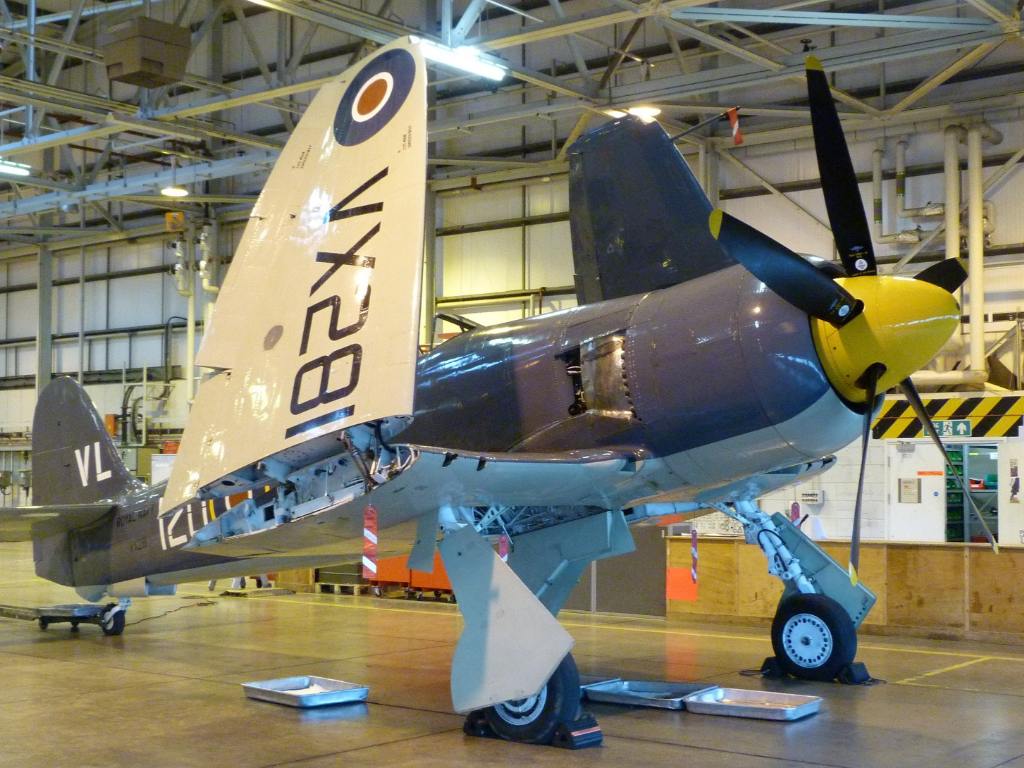 This deeper engineering work fell to the team from Weald Aviation who took a couple of days to replace the failed seal and conduct leak checks.  In July VX281 returned to North Weald for a 50 hour engine inspection which like the Pegasus involves the cylinders being removed and an inspection of the pistons, crank assembly and other components.  This went well, however shortly afterwards a panel detached in flight which meant she took no further part in the display season whilst this was fixed.  The aircraft now awaits work which will be conducted through the winter months to adjust her Centre of Gravity which is restricting the weight of the person she can carry in the rear seat. 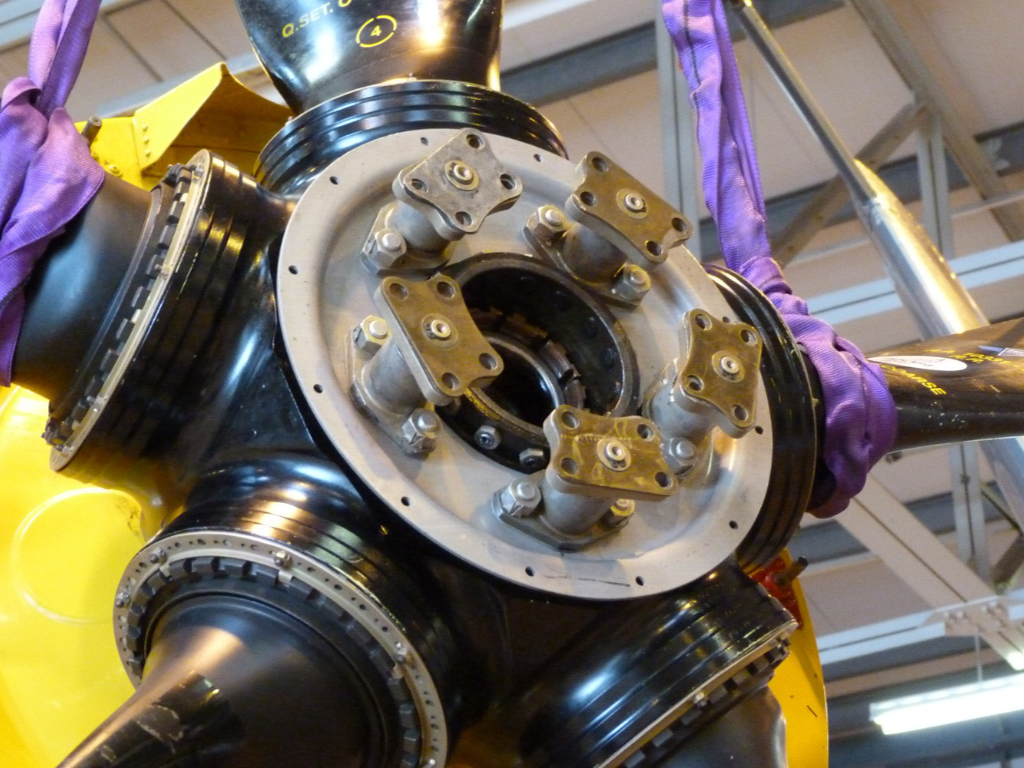 The single seat Sea Fury VR930 remains subject to periodic checks whilst she awaits a decision on when she can return to flight.  She remains an impressive sight in Hangar 15.

Throughout the year work has continued to assess damage and build a plan to return XP924 to flight.  Despite the ‘wheels up’ recovery in 2017  the Sea Vixen is in remarkably good shape, a testament to the excellent runway centreline landing and the fact that the weight was evenly taken by the drop tanks, tail boom skids, and under the centre fuselage by the speed brake and main gearbox.  Both engines appear serviceable though the gearbox is badly damaged as is the speed brake and some of the belly skin and frames. Nevertheless she was dressed with the best external panels and well presented for Air Day in July on static display.

The Sea Vixen team augmented by volunteers, are busy rectifying some of the historic deferred defects unrelated to the landing.  Several fuel leaks have been repaired with extremely difficult to access rubber liners and components within. Here is the removed No. 1a port tank and its new replacement  and the void within the wing root where it normally lives. Also removed was a lot of contaminated masking and padding tape which is fitted to protect the rubber from chafing on rivet heads.  At present a search is on to source replacement laces to secure the top of the ‘bag’ to the upper skin of the wing. The fuselage sheet metal repair schemes remain under study and the team are engaging with outside agencies to better understand the likely work and costs.

Both heavy stores pylon mounting lugs  and their mating points on the wings have been inspected by NDT and found to be serviceable. These experienced light but unusual forces from the belly landing as they supported the phenolic alloy drop tanks that cushioned the landing briefly before rupturing.  Fortunately there are sufficient spares to make up two new drop tanks which will be important to enable the Vixen to reach more distant display venues in the future.  Ricky a new volunteer has started to build a pod version of a ground start “Palouste” units using components from a u/s pod and a air transportable unit. The red unit on the right is working and will remain intact

There is also an aspiration to reinstall engines and a gearbox, so as to be able to ground run and conduct periodic functional checks to aid continued serviceability.  There is plenty of optimism that replacements will be found for the unrepairable components but the project is big and Navy Wings is working hard to see it completed.

Please help the work of Navy Wings by signing up as a supporter, donating and shopping in the Flight Store. To see how you can further help the Charity, click here 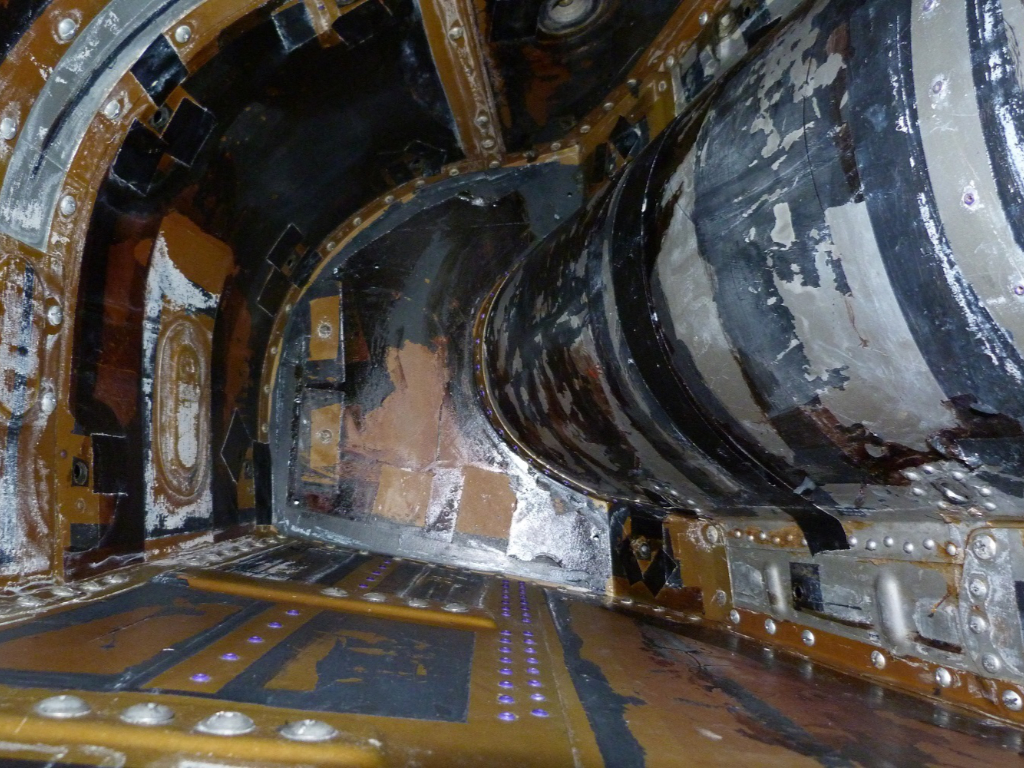 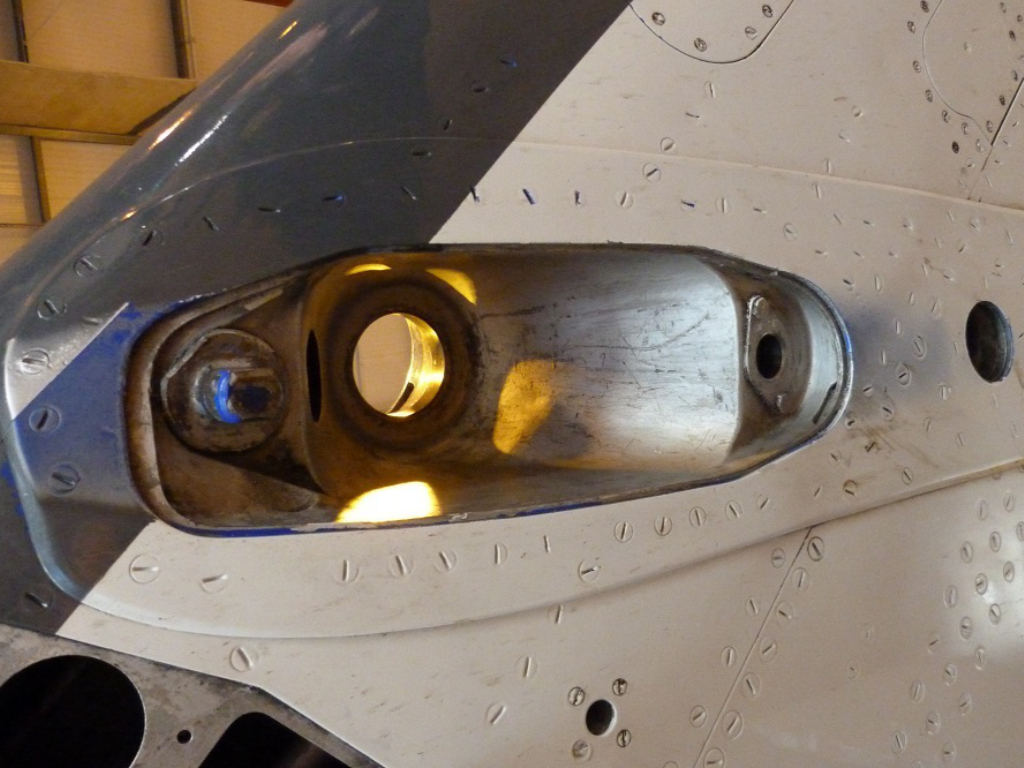 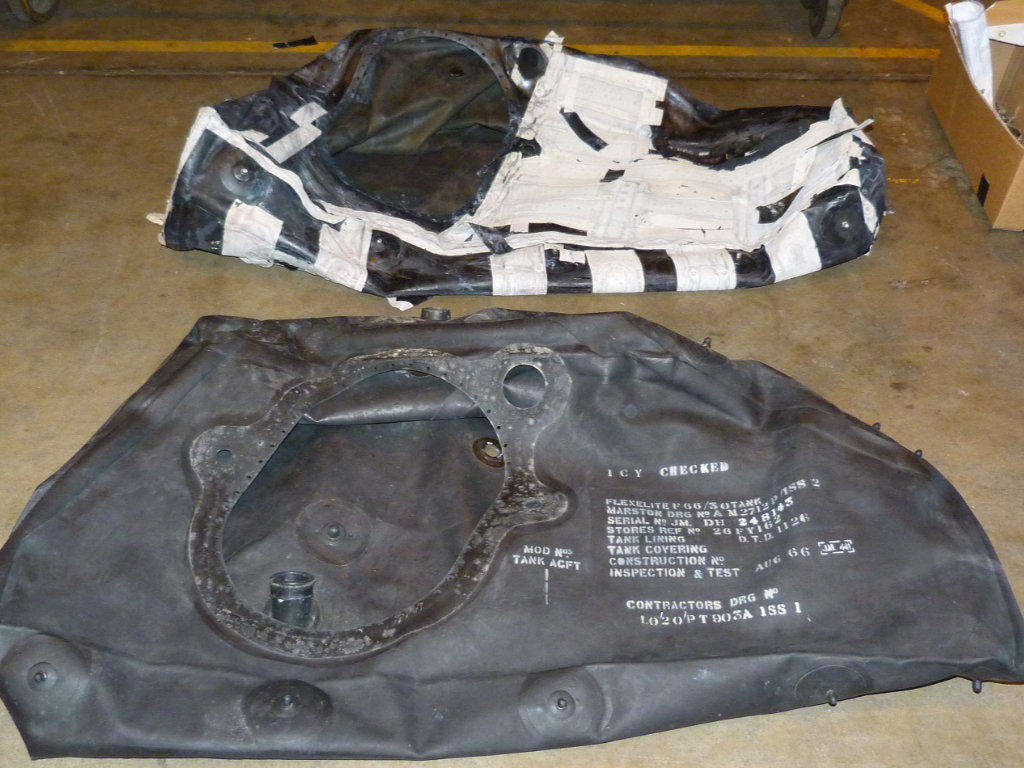 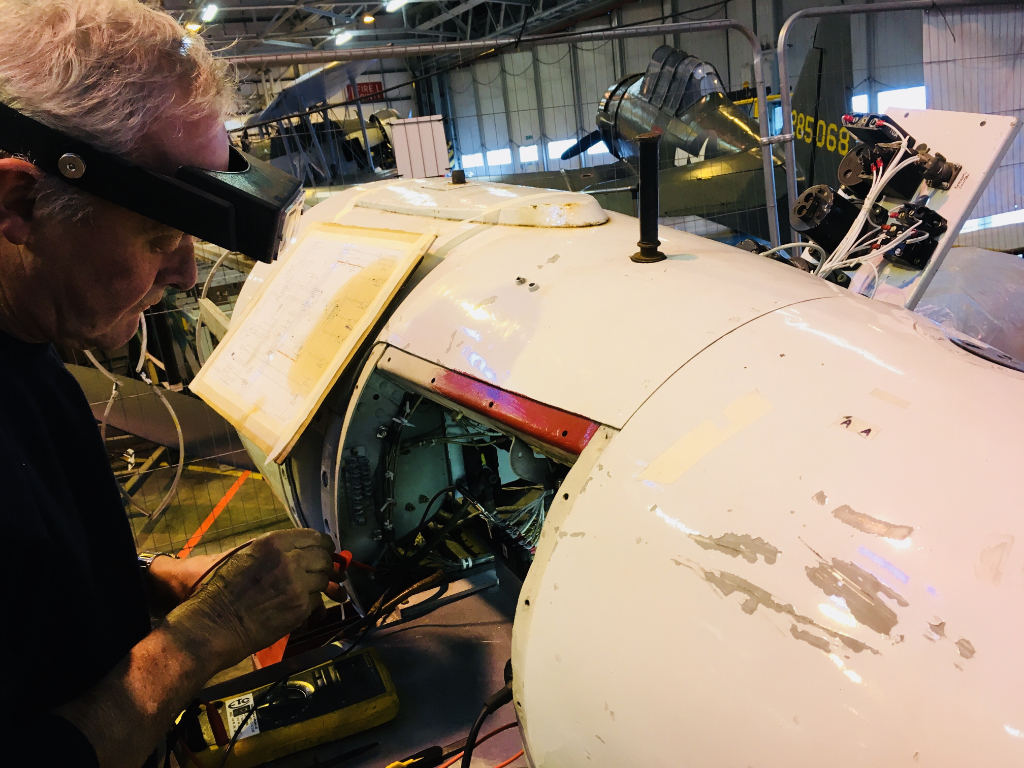