There is much going on in the heritage hangar, The Sea Vixen is in remarkably good shape despite the ‘wheels up’ recovery last year, a testament to the excellent runway centre line landing and the fact that the weight was evenly displaced by the drop tanks, tail boom skids, and under the centre fuselage by the speed brake and main gearbox. The Sea Vixen took delivery of a replacement canopy, kindly donated by Mr Clive Porter from Pure Aviation in Herefordshire. The canopy was delivered in style to the Navy Wings Heritage Hangar by pilot Lt David Houghton-Barnes on a Merlin from 846 squadron.

Both Sea Vixen engines are serviceable; with no foreign object damage, and no shock loading as they are connected to the gearbox by free wheel units.  So whilst a full restoration package is being investigated the team are busy rectifying some of the historic deferred defects unrelated to the landing. Many of the fuel tanks are ‘integral’, that is box sections within the structure coated with an internal sealant.  However the 2 in the mid fuselage and the pair in the wing stubs have rubber liners and one of these may need to be replaced.   A 6 gallon recuperator  has also been replaced; The recuperators in the port and stbd provide fuel directly to the engines when the aircraft is inverted. Air pressure from the engine compressor bleeds provides the motive force. Like much of the maintenance on a Vixen this involves strong knees and groping around through small openings in belly panels.

A first step in the fuselage restoration is planned with some local expert talent working on a repair scheme for one of the transverse frames under the jet pipes. This work will be offered as a reference to the engineering authorities who hopefully will provide clearances for further sheet metal repairs. One minor correction to the Sea Vixen narrative.

Whilst the whole package is scoped there is a plan to reinstall engines and a gearbox so as to be able to ground run and conduct periodic functional checks to aid continued serviceability.  There is plenty of optimism that replacements will be found for the unrepairable components and we would like to thank Mr Clive Porter from Pure Aviation in Herefordshire for donating a replacement canopy which was kindly delivered to the Navy Wings Heritage Hangar by pilot Lt David Houghton-Barnes on a Merlin from 846 squadron. To assist with the engineering work of Navy Wings please consider signing up as a supporter or shopping in the Flight Store. 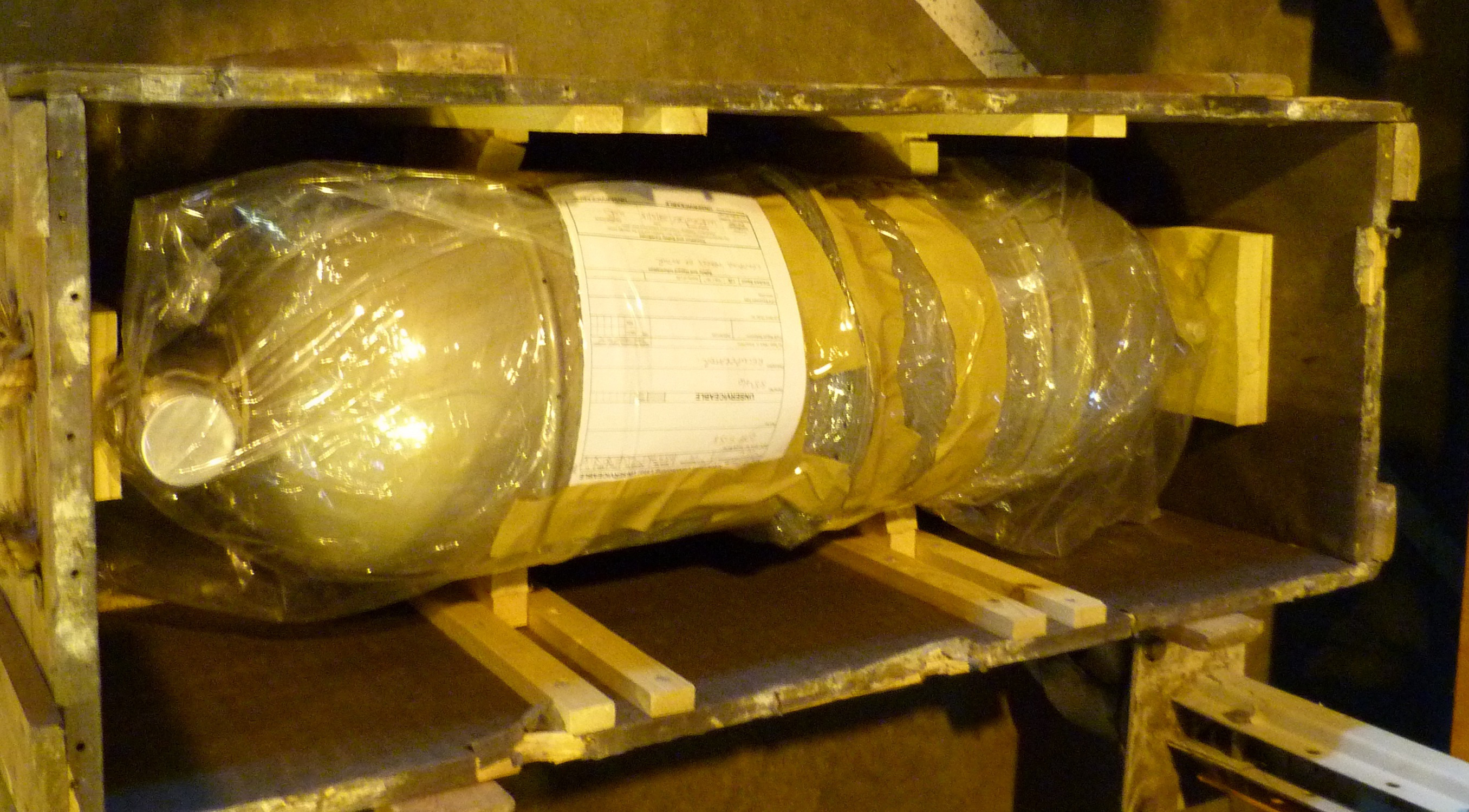 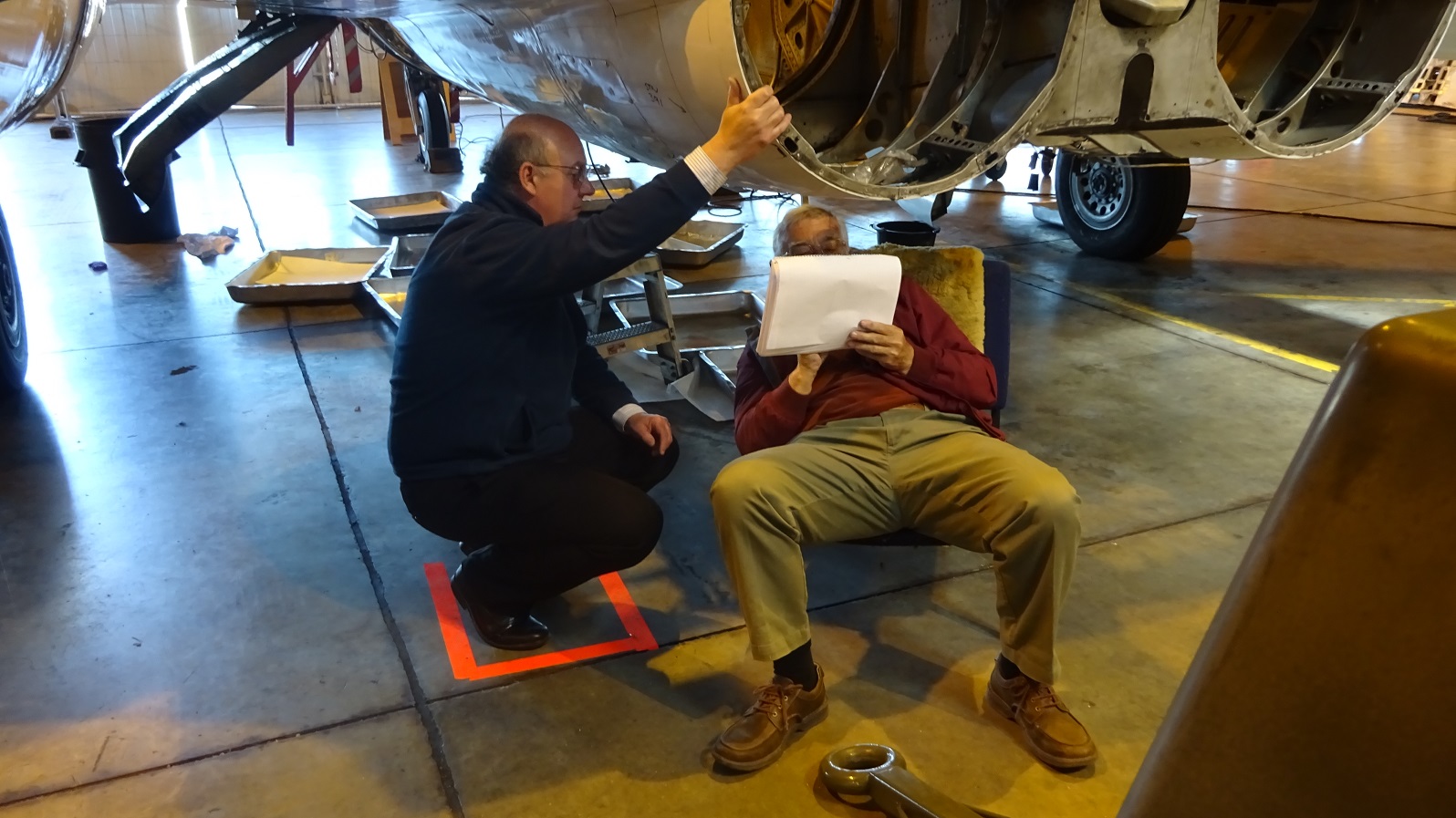 The T20 Sea Fury has been flying at various events but developed an oil leak on the last return trip to Yeovilton.  The problem was traced to the prop shaft ‘viton’ rubber seal which normally keeps the engine oil inside the reduction gearbox on the front of the engine.  The oil here is not under significant pressure as the gearbox and crankcase are vented but any leakage of engine oil needs to be cured quickly.  To get at the seal the spinner, prop assembly and pitch control mechanism need to be removed.

The errant ‘gits’ type seal lives behind the spinner back plate and prop assembly that are mounted on the splined shaft and retained with the single nut whose threads take all the force that is needed to tug 5½ tons along at 400 knots.

The pitch change mechanism is fitted in front of the props as is a balance plate with appropriated weights   A Constant Speed Unit (CSU) with a 400 psi pump circulates engine oil via the hollow prop shaft through co-axial feed and return pipes which also support the piston. The CSU regulates the pressure either side of the piston so as to move the cylinder that is connected to the individual blade pitch change racks and hence maintain prop and engine revs within a certain range.  The 2 piston ‘o’ ring seals are designed to allow some oil to bleed past and this helps to dampen movements and also bleed the system.  The seal was left overnight to check for leaks at rest and will be subject to a ground run before the engineering duo Geoff and Ray from Wield Aviation, return home. 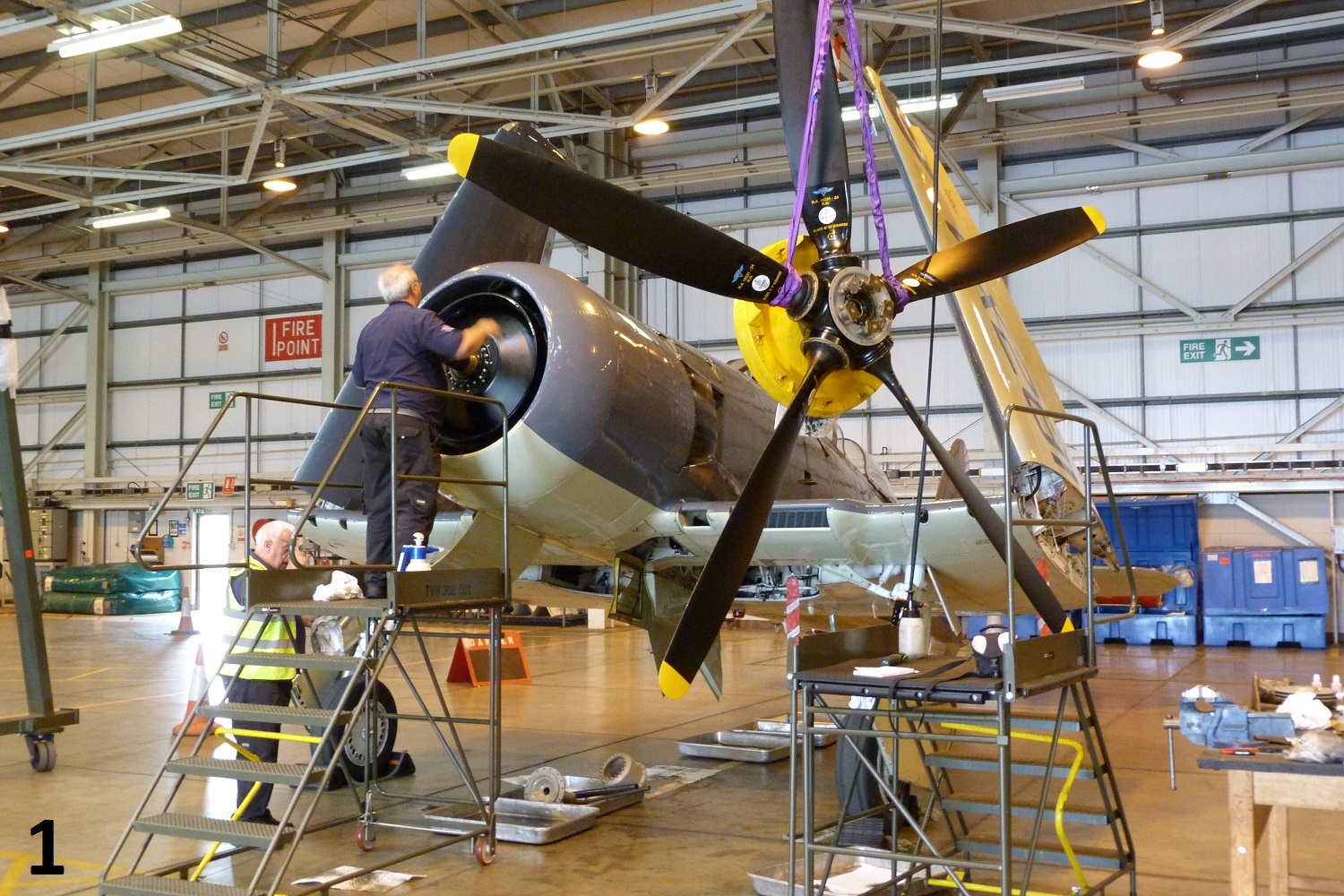 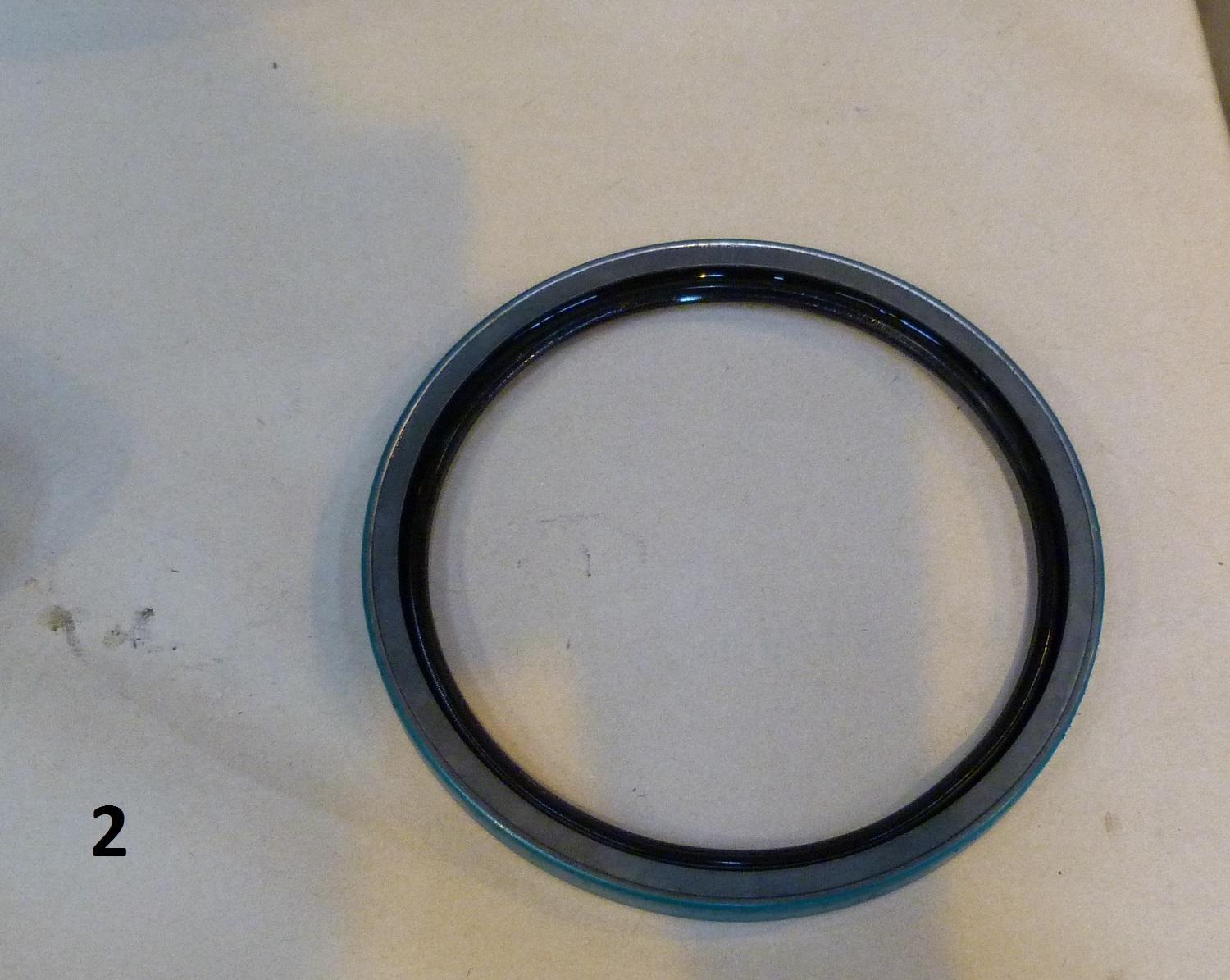 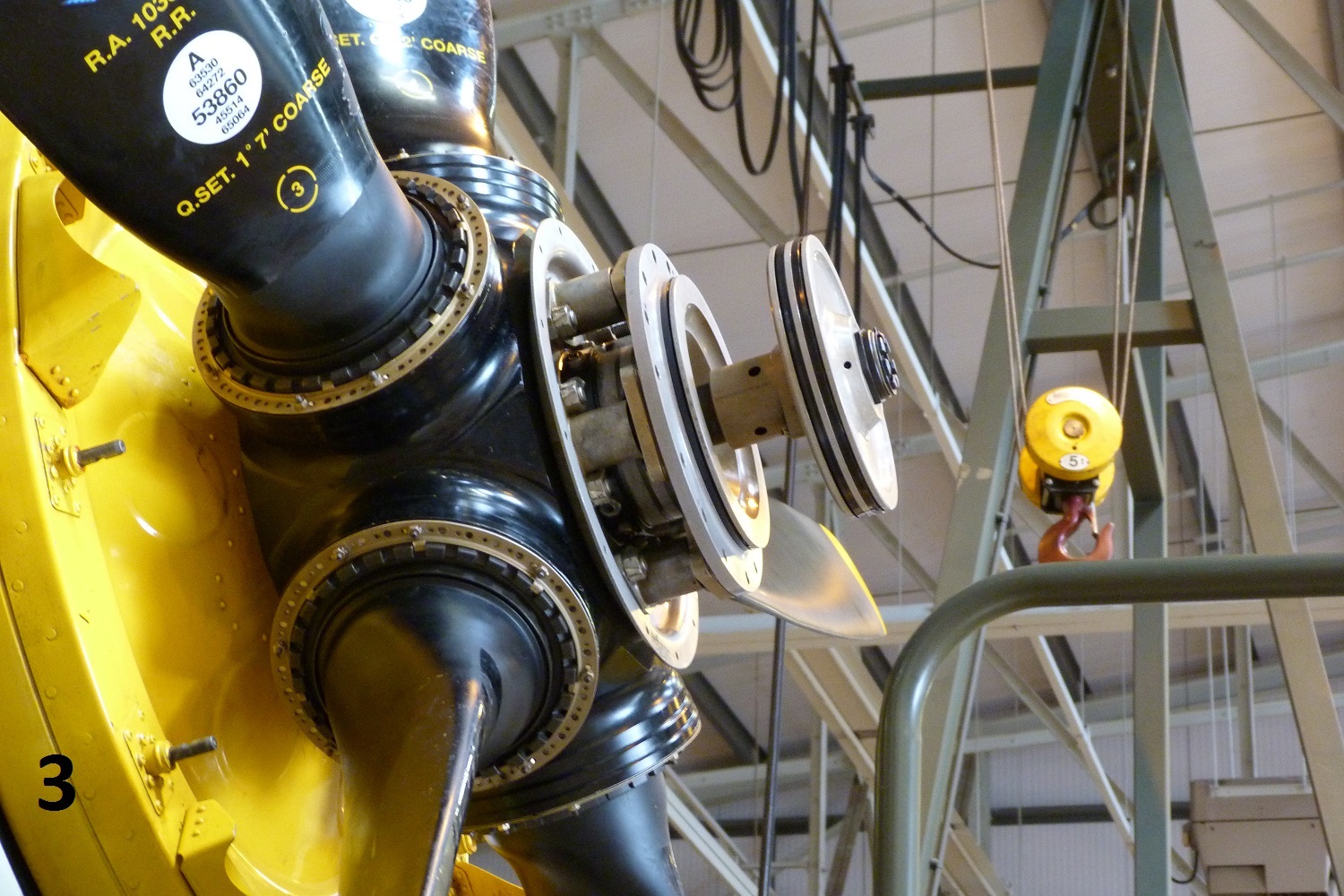 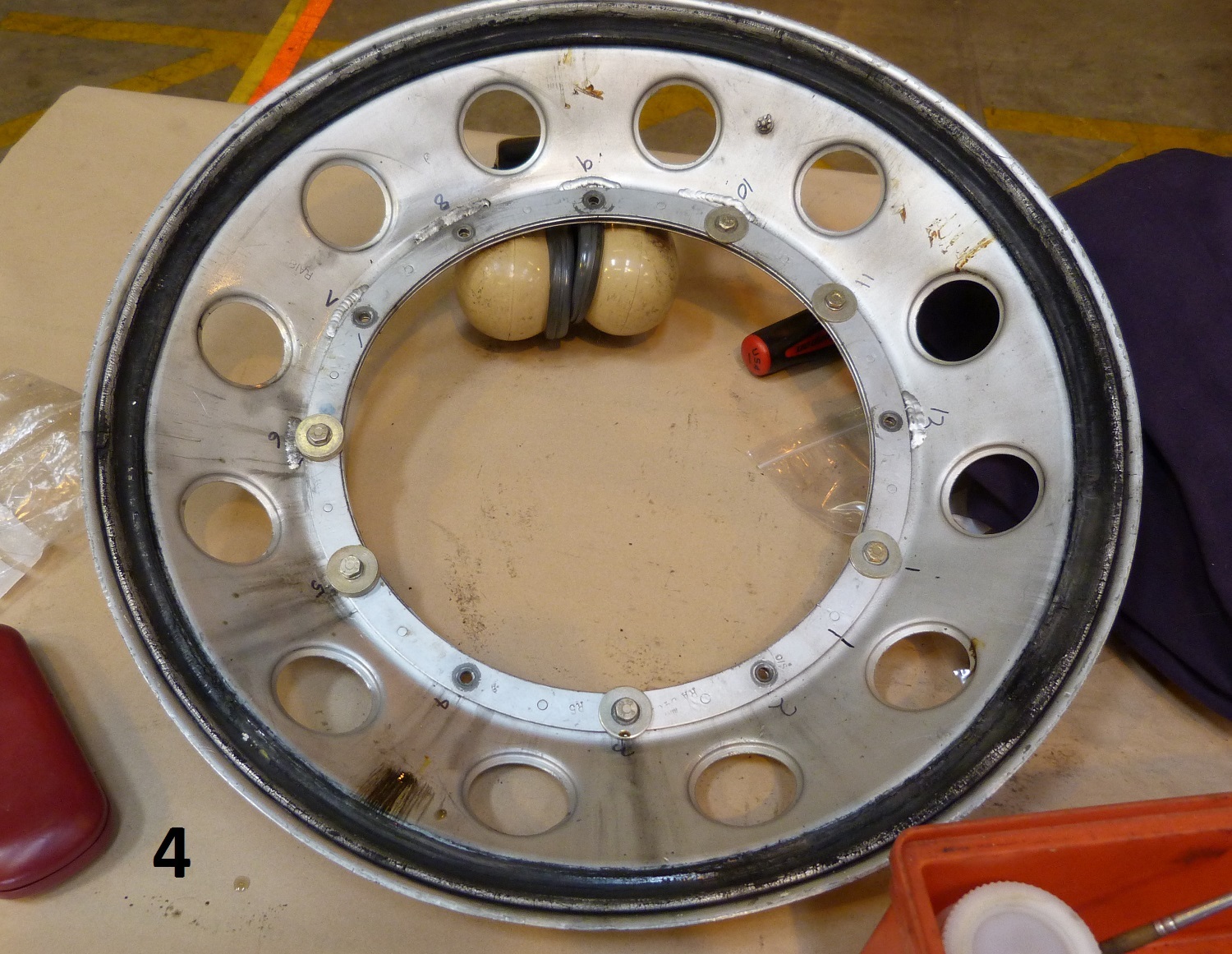 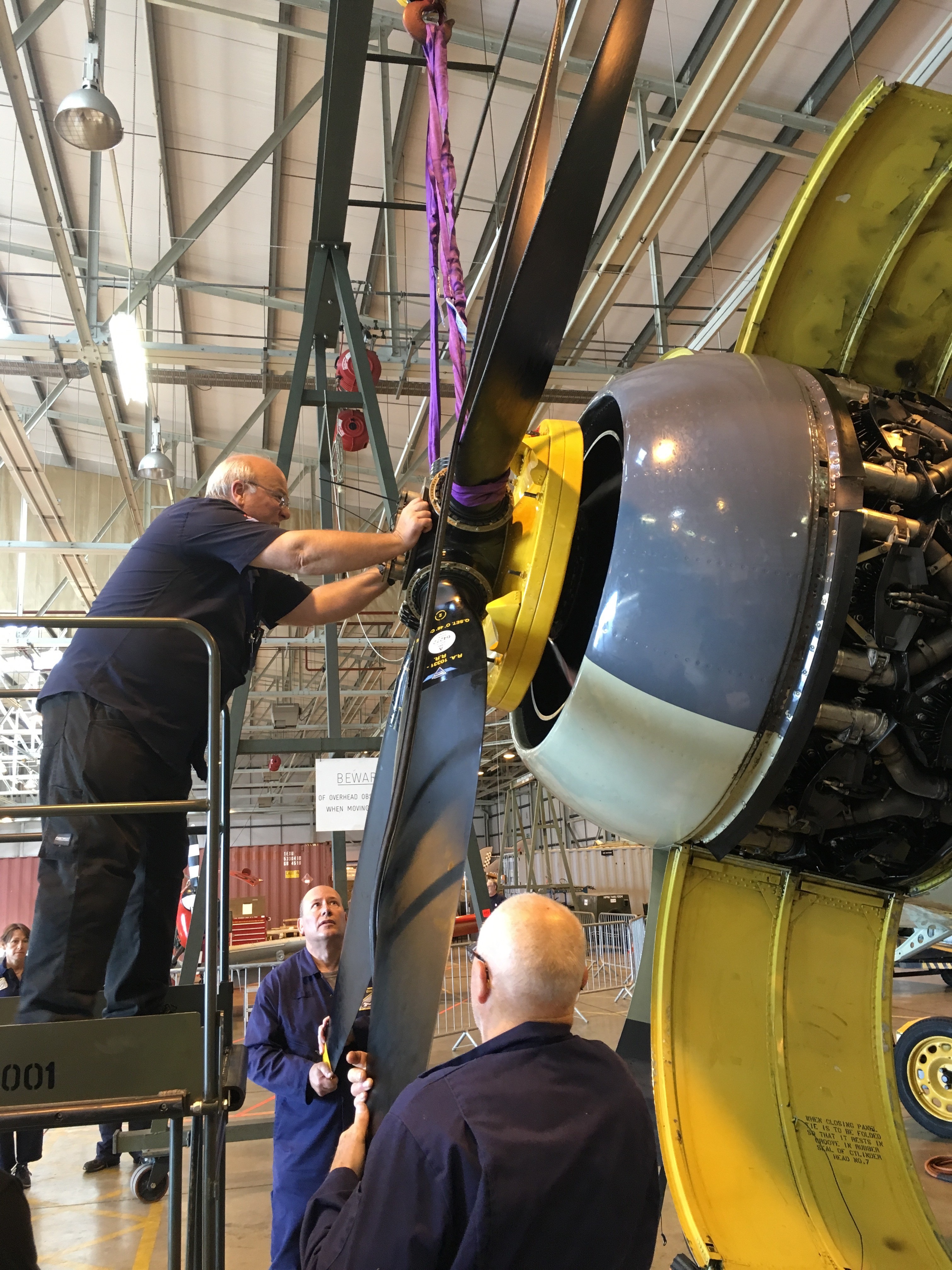 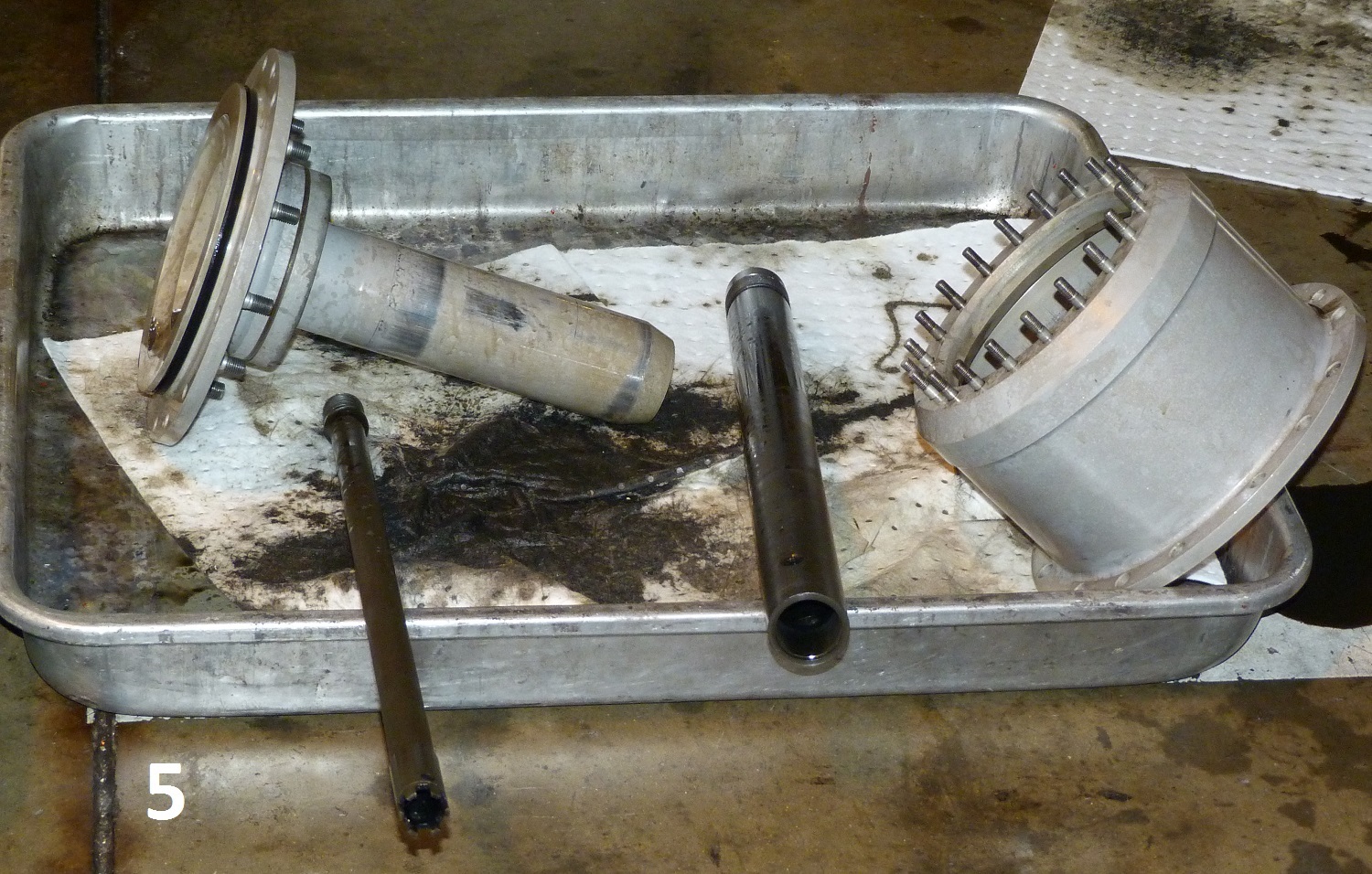 The Chipmunk rebuild is progressing well following extensive X-Ray inspections of the tail plane and the supporting struts either side of the tail wheel. Many of the refitted panels have been freshly painted at Linton-on-Ouse (Photo 6). Mark Wilson is busy refitting the trim tab cables and Andy the battery and after some rigging checks it will be ready for ground running. 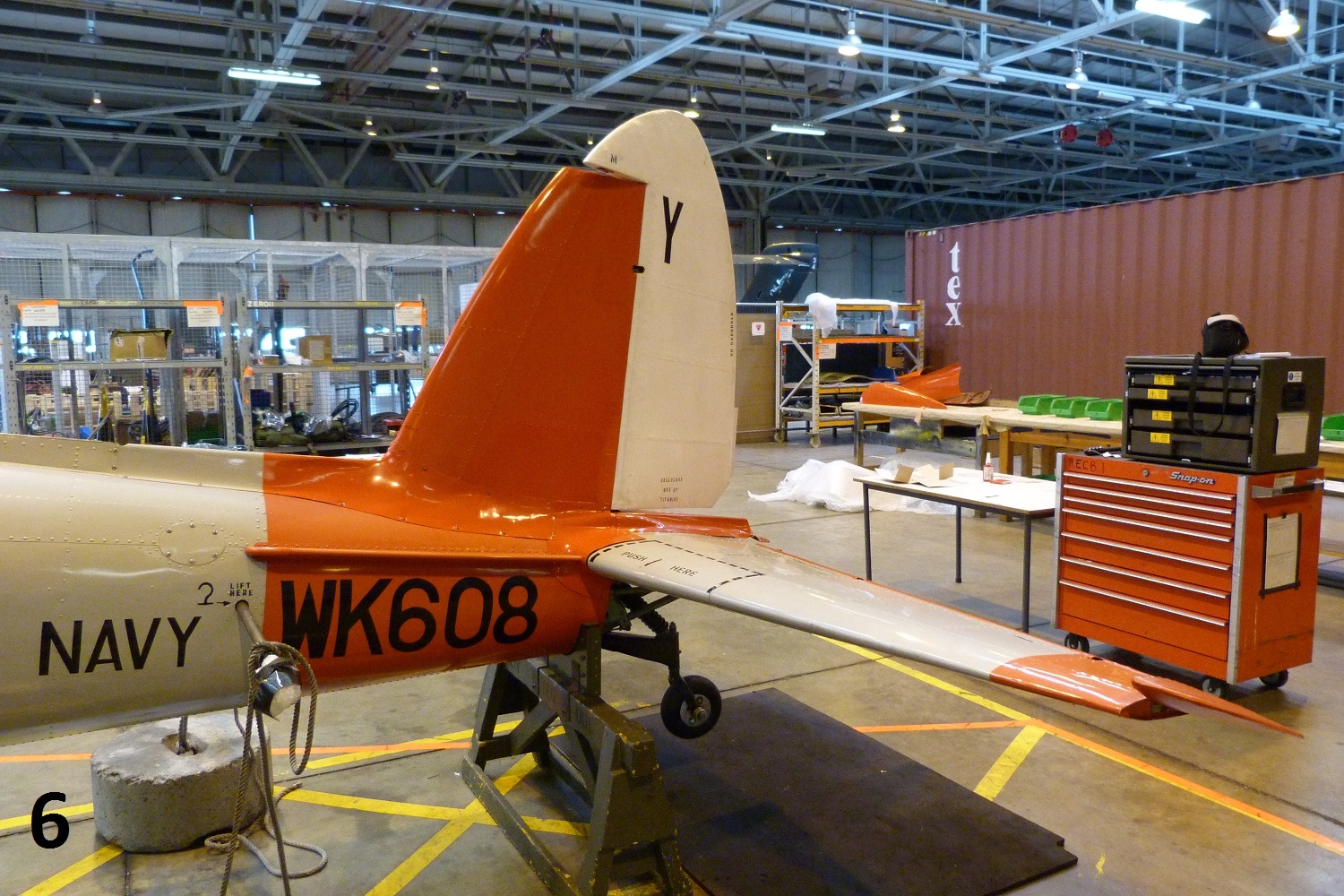 Swordfish W5856 is running well and the niggling brake pressure saga has been resolved conclusively after the discovery of a pin hole leak in the top of the intermediate pressure bottle, fortunately a spare was available and soon fitted.  The supply of new pistons for the Pegasus engines is now assured and LS 326 is undergoing X-Ray NDT in the old hangar  and hopefully will soon be fitted with her rebuilt engine. Please help support the work of the engineers by signing up as a supporter or shopping in the Navy Wings flight store. Your support helps keep  these important aircraft in the skies. 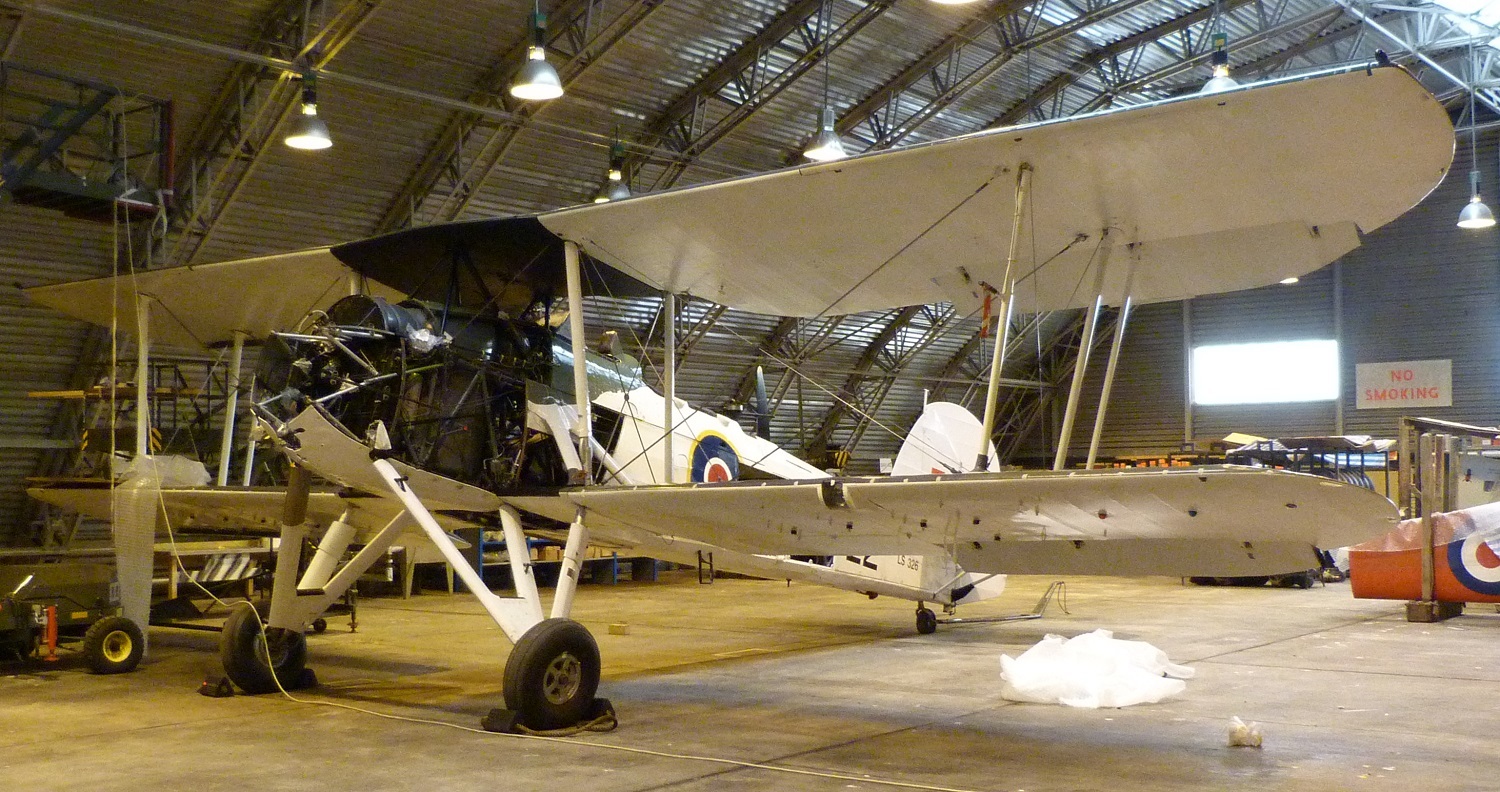