80th Anniversary Of The Channel Dash 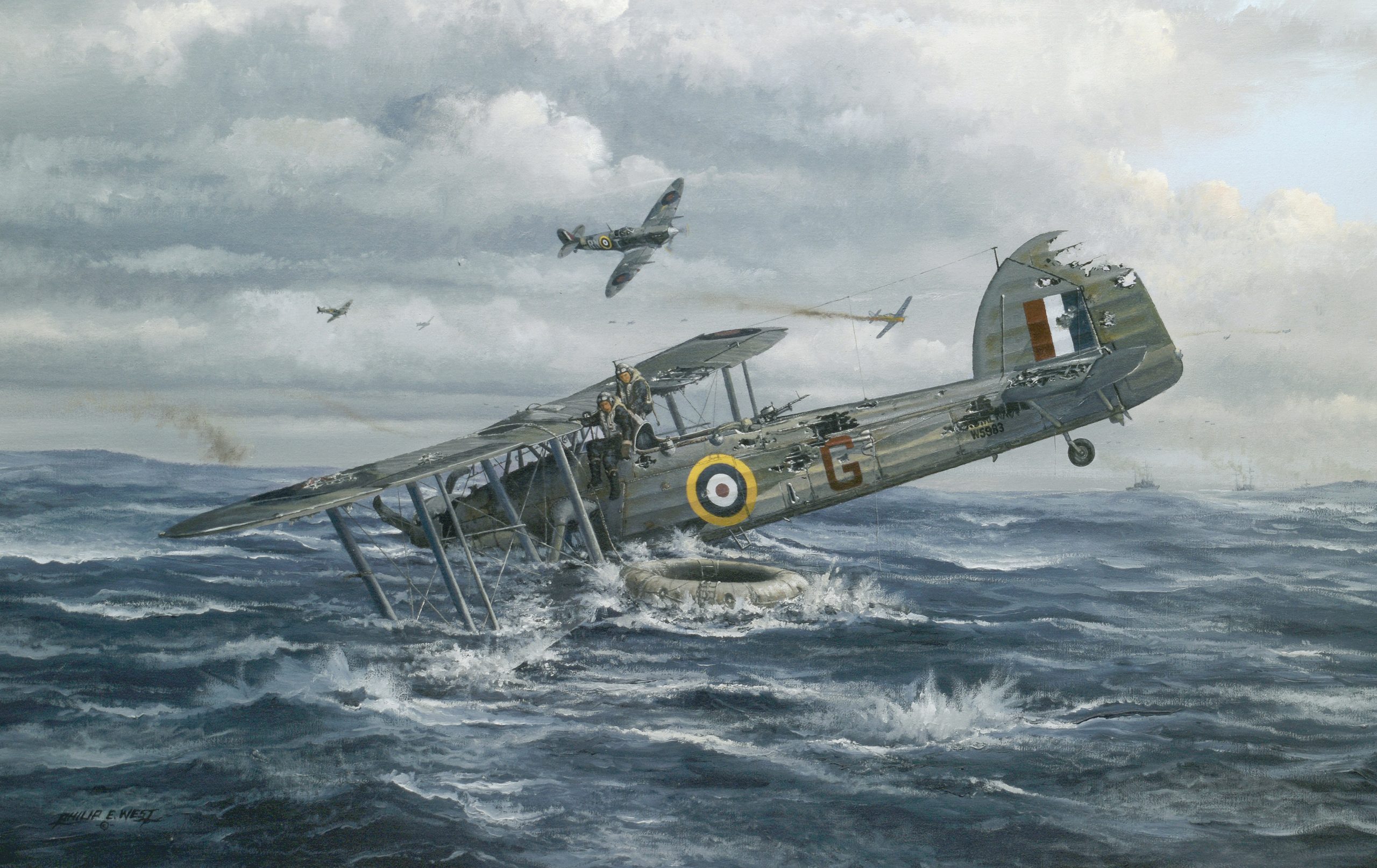 Channel Dash Heroes reproduced by kind permission of Philip E West
The Straits of Dover 12 February 1942. Sub Lieutenant Edgar Lee helps his badly wounded pilot, Sub Lieutenant Brian Rose from the cockpit of their downed Swordfish before it sinks into the depths of the English Channel following their attack on the mighty German fleet.
The Charity would like to thank Mr Malcolm Cornwallace of Margate, Kent, for his generous donation of a magnificent framed painting of the Channel Dash by Philip West, signed by the Channel Dash Heroes who survived. The painting will be included in the Ambassadors’ Dinner Auction later this year.

80TH ANNIVERSARY OF THE CHANNEL DASH

This year marks the 80th Anniversary of The Channel Dash, one of the most daring and courageous actions in the history of the Fleet Air Arm.

Their mission on that fateful day was to attack one of the largest German Battle Fleets ever assembled, supported by more than 200 fighter aircraft, as it made a ‘dash’ from France to Germany, incredibly sailing right up the Channel without having been seen or challenged. The great grey battleships were now streaking through the Straits of Dover, literally crossing Britain’s doorstep.

At Manston, Lieutenant Commander Esmonde addressed his crews. “The balloon’s gone up” he said, in a clipped voice, “Get ready”. The young aviators faced insurmountable odds.

A year earlier, in May 1941, Eugene Esmonde DSO had led his Squadron in the attack on the Bismarck. He and his men knew that that their specialist training in torpedo attack and the hardiness and manoeuvrability of the Swordfish gave them, as good a chance as anybody, of stopping or slowing down the enemy ships. They knew also that the Swordfish was terribly slow and vulnerable to both anti-aircraft fire and attack by fighters; but there was a job to be done.

Assured that they would be given cover by the RAF for the run in, they took off and at 1,500 feet, circled over the East Kent coast, waiting for their fighter escort.

Ten Spitfires from 72 Squadron joined them, but with the cloud thickening and no sign of the other four promised Spitfire Squadrons, Esmonde weighed up the risks and knew that it was ‘Now or Never’.

If the Swordfish, could achieve two or three hits, they could prevent the enemy from getting away. Even if the torpedoes only slowed the fleet down, that would give time for the heavy ships of the Royal Navy, in hot pursuit, to bring them to battle.

He waved his hand and dived down to fifty feet above sea level to lead his Squadron out to sea. Within minutes they were engaged by the swarm of enemy aircraft defending the German ships. Crippled and ablaze before they got into range, the Swordfish flew on unswervingly, determined to make their attacks.

Lieutenant Commander Esmonde’s leading aircraft had its port wing shot to pieces, yet he kept going.

The second Swordfish, piloted by Sub Lieutenant Pat Kingsmill had its engine and port wing set ablaze. The Telegraphist Air Gunner was killed. It kept on towards the enemy ships. 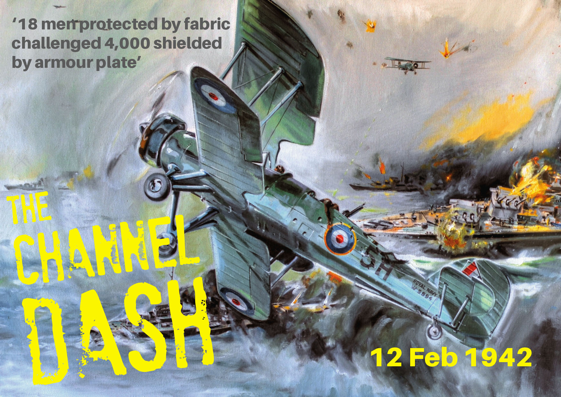 The third aircraft, piloted by Sub Lieutenant Brian Rose, had its engine riddled. It too flew on. Sighting the Scharnhorst and Gneisenau, partly obscured by smoke, Lieutenant Commander Esmonde led his limping Squadron straight into the attack over the enemy destroyer screen. They were met by murderous fire.

Lieutenant Commander Esmonde’s machine was hit again. It dived into the sea but not before, in a last desperate effort, he pulled the Swordfish’s nose up and released his torpedo towards the Prinz Eugen. Then there was a red flash as a direct hit blew the Swordfish to pieces. His Observer and Telegraphist Air Gunner were picked up, but both had been killed. Eugene Esmonde went down with his aircraft.

The two remaining aircraft of the first flight pressed home the attack. Sub Lieutenant Kingsmill released his torpedo in the direction of the leading ship, one of the battleships. By this time his engine was cutting-out and shortly afterwards failed altogether. A canon shell had penetrated the fuel tank. The plane crashed into the sea. The Pilot and Observer were rescued.

The third Swordfish also dropped its torpedo at the leading ship. Hit again and again, the plane fell into the sea. The water was ice cold, but the wounded pilot and observer got into their dinghy and were picked up. The battered aircraft sank very quickly and Leading Airman Johnson, the Telegraphist Air Gunner, perished with his machine.

The second flight of three aircraft, were all shot to shreds before they went into action. But with extraordinary bravery, their wounded and dying young crews kept going, flying into a red and orange wall of exploding shells. One after another they were blown to pieces.

All six Swordfish were lost and only five of the gallant eighteen naval aviators survived, four of them wounded. 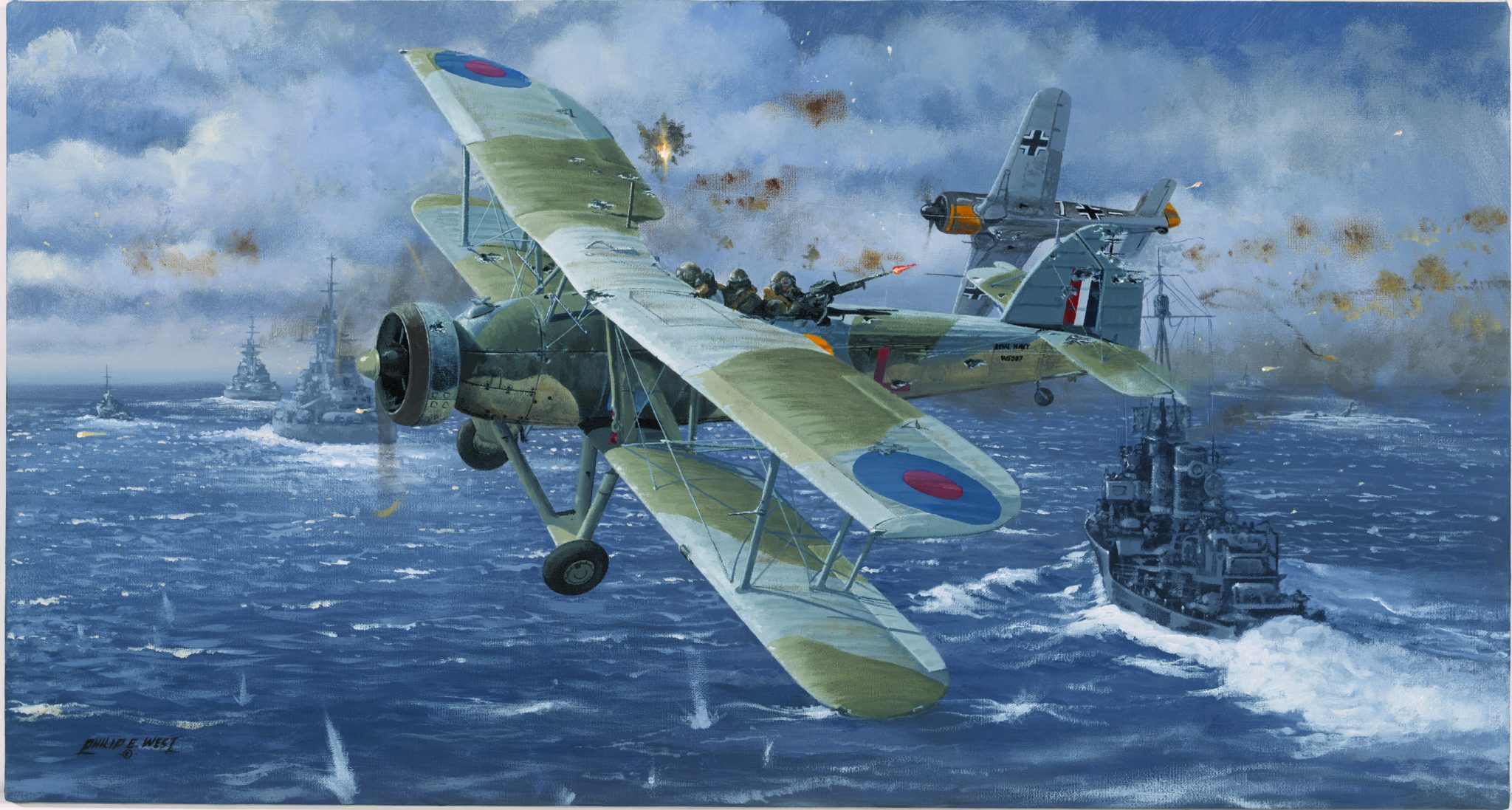 “Operation Cerberus – The Channel Dash” by Philip E. West – Reproduced with permission from SWA Fine Art Publishers. Here we see the Swordfish flown by Sub. Lt. Kingsmill and Sub. Lt. Samples with PO Bunce in the rear, fighting for their lives with his machine gun.

The Fleet Air Arm has been at the forefront of many courageous actions, but the unsurpassed bravery of the Channel Dash heroes and their supreme sacrifice in the face of the enemy remains as inspirational and intensely moving today, as it was eighty years ago. Lieutenant Commander Eugene Esmonde was post humously awarded the highest military distinction, the Victoria Cross, and his crews were awarded between them, four DSOs, one Conspicuous Gallantry Medal and 12 Mentions in Despatches.

Looking back, it is easy to say that the Channel Dash was a tragic failure, and that six old Swordfish should never have been sent out on such a desperate and nearly hopeless venture – but it was a glorious failure. The mission was flawed but the manner of its undertaking was brilliant. There is little doubt that Lieutenant Commander Eugene Esmonde and his men would readily do the same again, if it was demanded of them, weighing up the odds against them on the one hand, and the chance of success on the other. There was a chance, a fair chance, that if they had had a little more luck, they may have had a hit that made a crucial difference – and it was that resolve and determination that remains the hallmark of naval aviation to this day. When it really matters, Naval aircraft and Naval aircrews can be relied upon to get the job done – whatever the challenges and dangers.

Time as we know, does not stand still, but it cannot tarnish brilliance. The bravery of the Channel Dash heroes – eighteen young men the country will never forget – lives on in the venerable Swordfish still flying with the Navy Wings Heritage Flight.

Although she no longer flies under the White Ensign, keeping the Swordfish flying today is a visible and tangible reminder of the spirit and ethos of the Fleet Air Arm and the sacrifice made by so many in the Naval Service in operational conflicts around the world.