80th Anniversary of the Naval Air Attack on Taranto 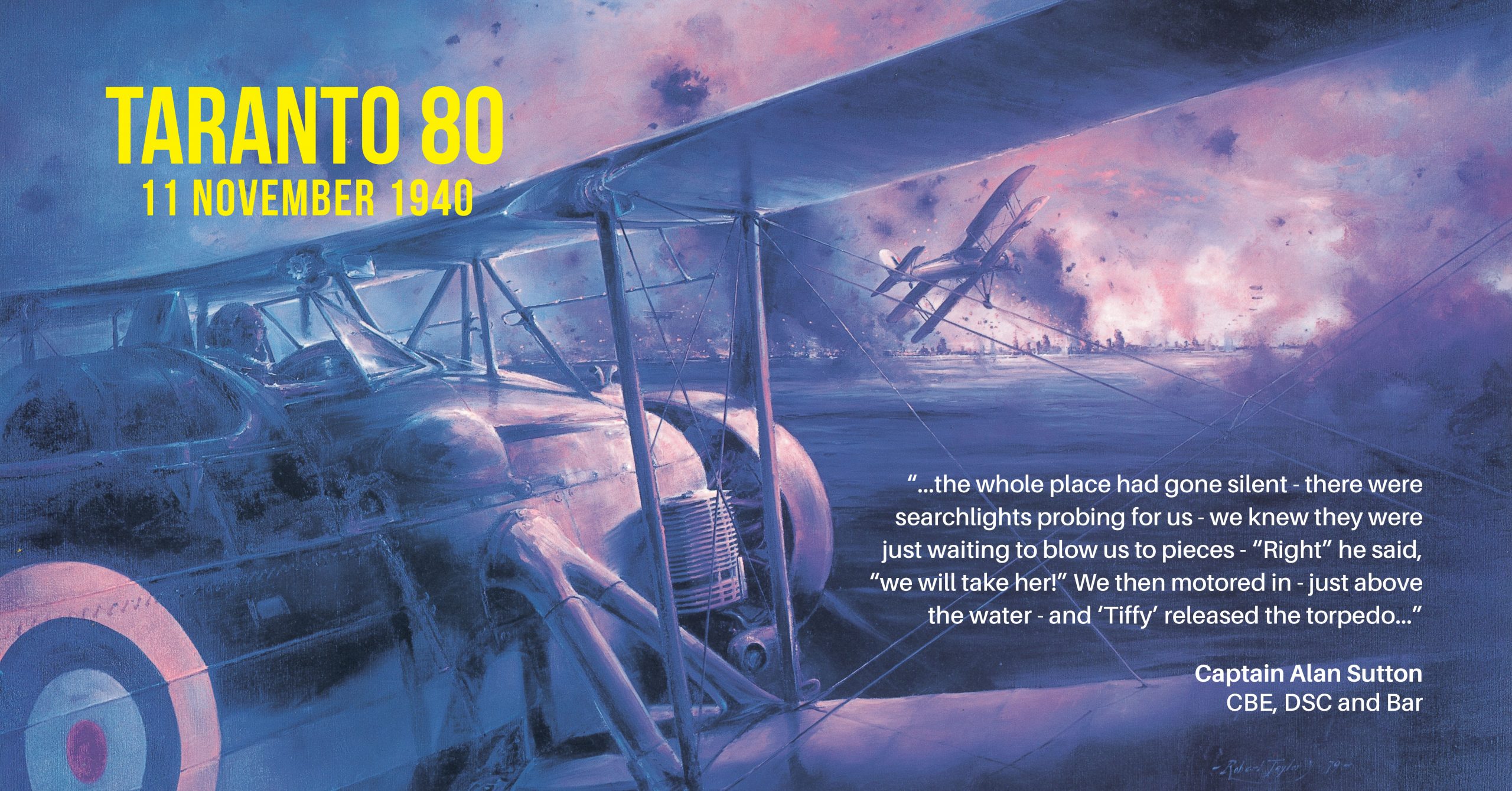 On 11 November 1940, the courage, audacity and indomitable spirit of a small band of naval aviators changed the course of history at a single stroke

For centuries the fighting effectiveness of the Royal Navy was dominated by the battleship but on the night of 11-12 November 1940, the historic and daring attack by 20 Swordfish aircraft from the aircraft carrier HMS Illustrious against the Italian Battle Fleet at Taranto, not only changed the course of WW2 in the Mediterranean but changed the future of naval warfare forever.

Flying 170 miles through the night, at the extreme limit of range from their carriers, a small band of naval aviators, in aircraft heavily laden with fuel and weapons, pressed home a bold and determined attack, dropping their torpedoes and bombs on the battleships, cruisers and destroyers anchored in Taranto harbour. The attacks on the highly defended harbour were swift, sudden, and unexpected, crippling the Italian Fleet and rendering the Italian Navy ineffective for the rest of the war.

It has been said that battles are not won and lost on maps alone, but in the hearts of men. There is a psychological factor sometimes which confounds the strategists. The courage, audacity and indomitable spirit of The Men of Taranto and their determination in the face of adversity sets Taranto apart. It is as much the character and attitude of The Men of Taranto, that inspires the annual Taranto Night celebrations in ships and shore establishments of the Royal Navy today, as it is the battle itself.

The mission had suffered a series of major set-backs not least the withdrawal of HMS Eagle due to battle damage and a hangar fire in HMS Illustrious. The consequent amalgam of remaining aircraft and crews was drawn from four different squadrons, including one crew member who had ditched only the day before! The disparate mix of youth and experience, the long transit in radio silence, the threat of the steel cables of barrage balloons and the anti-aircraft guns of battleships and shore batteries, coupled with the fact that such a mission had never been attempted before – didn’t deter in any way the resolve of the crews. Their unimaginable bravery, skilled airmanship and ‘can do’ approach, a hallmark of naval flying, undoubtedly played a significant part. The impact of the success at Taranto was a remarkable victory for such a small force. Only two Swordfish and two crew members were lost. It was not only a great victory, when the Allies needed it the most, but also an unprecedented example of one of the key Principles of War – Economy of Effort.

Observer, Alfie Sutton was one of the most experienced of the Naval fliers on the raid. He formed part of the second striking wave, flying with Lt Torrens-Spence. The second wave didn’t have the element of surprise of the first. They knew the enemy was waiting to blow them to pieces. “Let’s take her!” he said as they levelled out of the dive and flew in at wave height, firing their torpedo from 700 yards at one of the prime targets, the battleship Littorio. 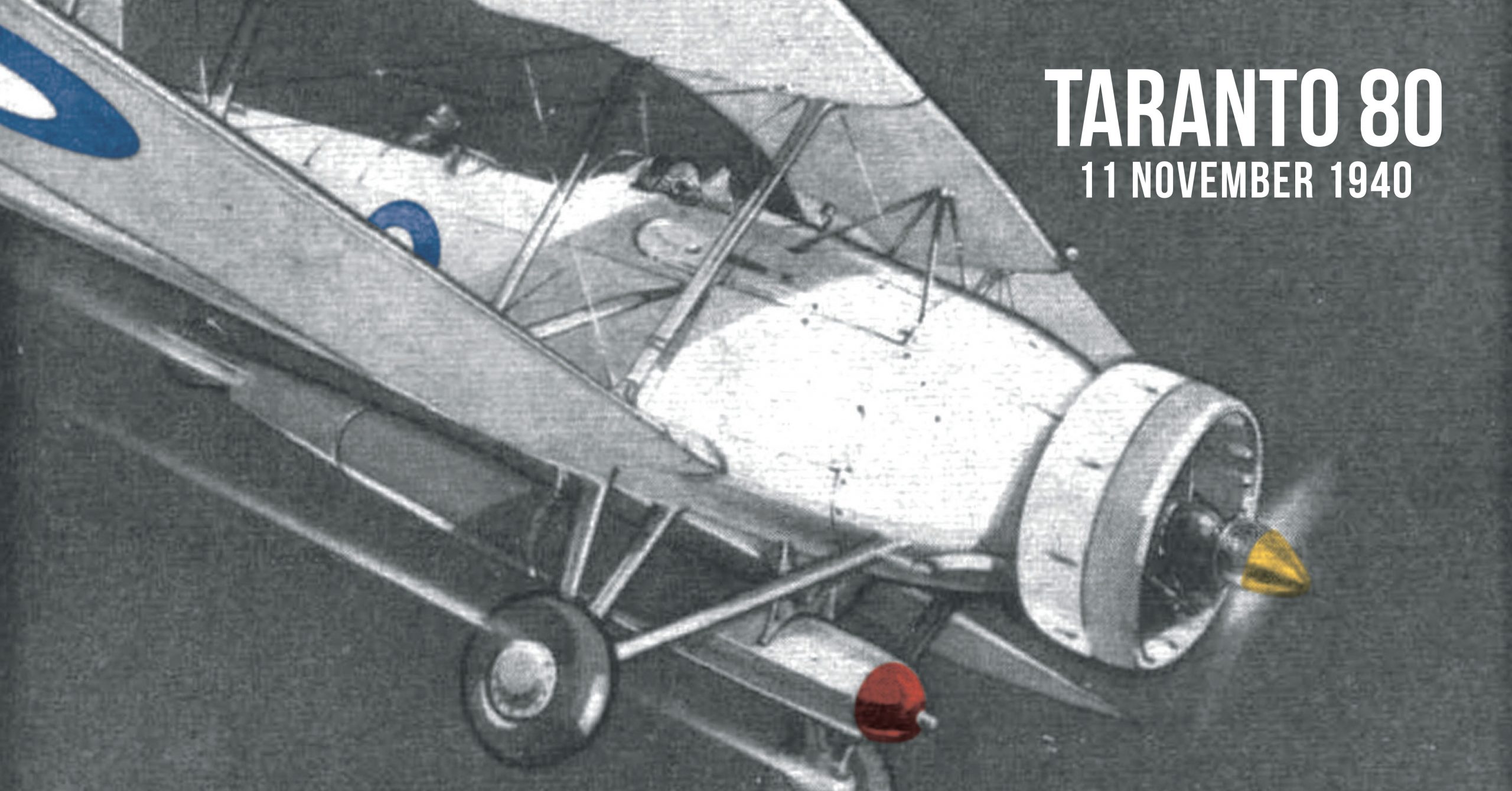 Every form of air attack is testing but the Swordfish Torpedo Attack is probably unique, in that the dive, at the steepest possible angle is hair-raising, and pulling out of the dive at just the right torpedo dropping height over the sea requires rock steady nerves and extraordinarily good judgement!

A torpedo attack is difficult enough by day against a target in open sea. It is many times more difficult at night against ships in a defended harbour and requires not only rock steady nerves but extraordinary good judgement. The dive alone, at the steepest possible angle, almost vertical – is hair raising! The air speed indicator does two complete revolutions of the clock as the speed mounts, and as the dive gets steeper and steeper, the whine of the supercharger and shriek of the bracing wires is both unearthly and alarming!

Tension mounts as the target below looms larger and larger, and the vital part of the attack – the pull out to within a few feet of the water, approaches. An error of judgement now is disastrous. Whether intentional or not, the operation was called Operation Judgement, as judging the exact moment to pull out of the dive and skim the wave tops to achieve optimum conditions to release the torpedo, was fundamental to success. Part of the skill was also coaxing the torpedo into the water. The torpedo’s sensitive gyroscopes could easily be damaged if just banged down into the sea.

The pilot feels the sudden strange buoyancy of the aircraft as the torpedo drops, then pull up! Evasive action! Horizontal aerobatics at full throttle as the aircraft flies through the inferno of anti-aircraft fire and climbs away! The sky over the harbour resembled a volcanic eruption, the darkness torn apart by a firework display which spat flames into the night at a height of nearly 5000 feet! Diving headlong into the lethal goldfish bowl of Taranto was desperately dangerous, with nothing like certainty of success. It is likely that many of the aircrews who attacked Taranto didn’t think they would get away with it. It was probably one of the most dangerous flying operations of the war.

Although we are not able to mark this year’s 80th anniversary of Taranto with the customary Taranto Night Dinners, the spirit of The Men of Taranto and the impact of their achievement is as awe inspiring today as it was 80 years ago. The Men of Taranto were the steeliest and coolest of types. Everything depended on the skill and determination of each individual involved. At this weekend’s Armistice Day – and always. We will remember them.