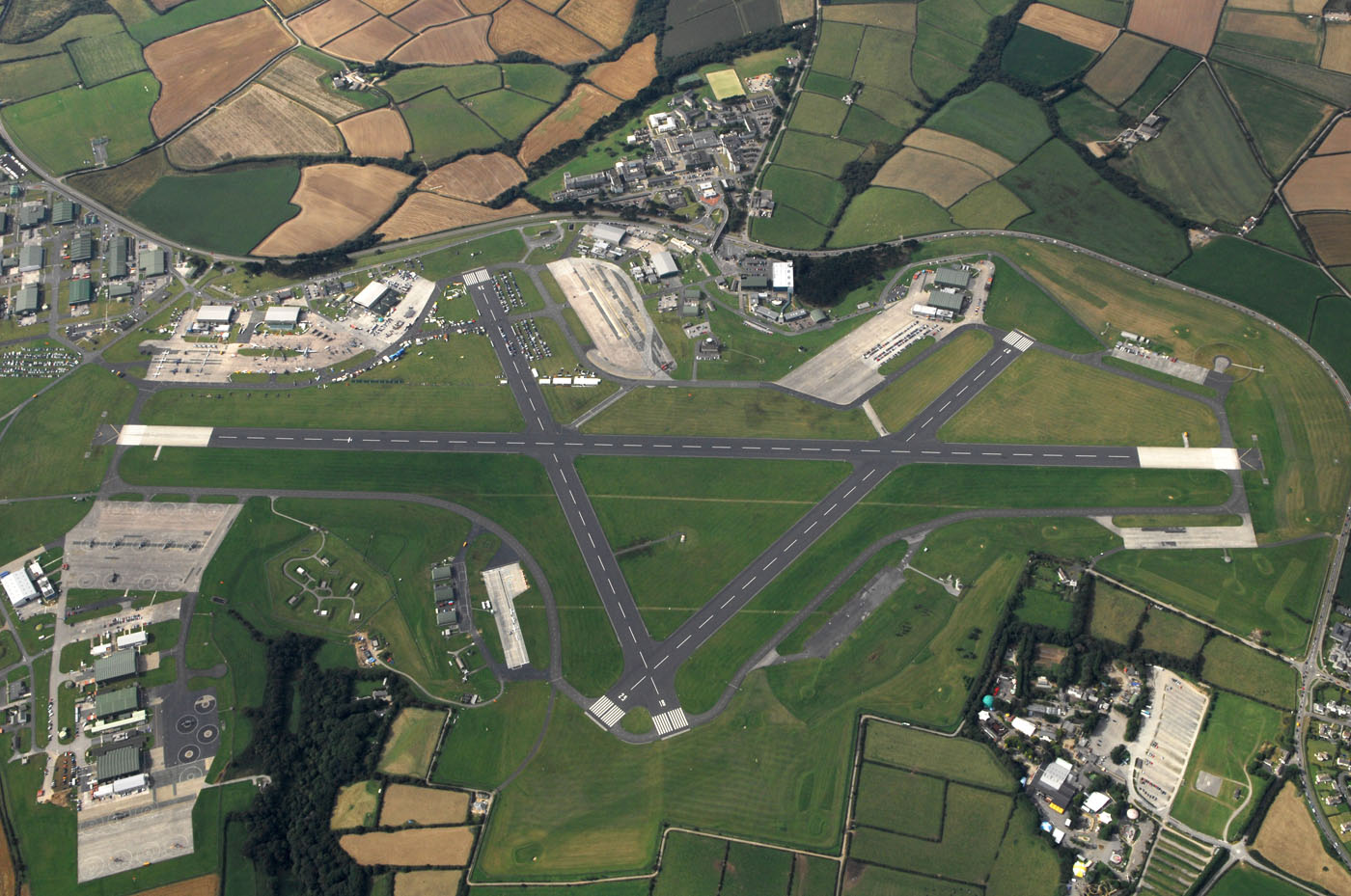 Most close shaves in the Fleet Air Arm concern pure aviation. Sometimes they involve personal failings and errors of a social kind. This is one such tale.

It was all routine really. We had disembarked the 824 Seaking Squadron from HMS ARK ROYAL to CULDROSE in December 1972 after the standard autumn exercises off Norway. Most of the aircraft were receiving some much needed attention and flying was limited. John Eacott (Eacs) and I both were due Instrument Rating renewals so our kindly Senior Pilot, Malarkey Jim put us on the Flypro for a mutual IF sortie.

We knew that the weather was coming in from the west, but would arrive about an hour after our charlie time . We had plenty of fuel, but being a purely Pilot IF training sortie we carried neither an Observer nor an Aircrewman. All was well until our controller informed us of a lowering cloud base at Culdrose so we opted for an early GCA. The routine then was that one Pilot would fly the GCA on Instruments down to breaking the cloud base, whereupon the non flying, – heads up pilot with the visual references would take over and land. All SOP so far, and Eacs flew a steady GCA most of the way down under the guidance of a trainee controller. About half a mile from the threshold, the controller’s patter broke down somewhat, particularly on height information, so Eacs quite correctly aborted the approach and carried out the overshoot procedure. Shortly afterwards, the controller’s Instructor came on the radio and told us that the cloud was now virtually on the deck and that we were to divert to RAF St Mawgan.

Now it was my turn to fly the GCA , and we had a good talk down. On runway 30 at St Mawgan, the decision height was 200 feet and as we approached that point on the glide path and centreline I was expecting Eacs to call visual and take control . That did not happen, so again I pulled in power and initiated the overshoot. As I did so, something outside the cockpit caught my eye, and in a moment I realised we were fully visual with the runway with a cloud base of about 350 feet. A second later we were back in the cloud and going round for another go. I was confused as to why Eacs had not taken control towards the end of the GCA but although we had plenty of fuel to divert to YEOVILTON we needed to get down at St Mawgan. So Eacs flew the GCA I took over at 300 feet and we landed.

Having debriefed Splot, he told us to return to CULDROSE the next morning , so we eased off to the Officers’ Mess for the night.

The team there was most welcoming, and although we were still in goon suits, we were allowed into the Bar and Dining Room. Over a beer I asked Eacs to explain why he had not taken over and landed after our first GCA at St Mawgan when it was obvious that we were in clear air and well below cloud. Although he was a well known Lothario in Squadron social circles, Eacs reply still caught me by surprise. He confessed that his girlfriend of the moment had his car at Yeovilton, and an opportunity to pick it up had presented itself if we could fly there on our second diversion!!

The evening grew jolly. Eacs and I having been trained in the Wardroom of ARK won at Spoof, Liar Dice and Horse. We then played the St Mawgan game of “footprints on the ceiling” We excelled once more, with our Pussers flying boot marks proudly displayed on high.

It was at this point, that things started to go wrong. Our generous hosts showed us to an artistic feature just outside the entrance to the Mess. There was a splendid pool, complete with orchids, lilies and goldfish backed by a tiled wall with a cascading waterfall over the top and draining into the pool. We were told that no one had ever been able to leap over the pool, grasp the top of the wall and against the flow haul themselves over the top to the other side.

Eacs and I were of course up to the challenge but despite several noble efforts found that our fingers could not hold their grip on the slippery top of the wall. We both fell backwards without ceremony into the pool, much to the delight of our hosts. There was little pain as, of course, we both still had our goon suits on!! Festivities then drew to a close, so we repaired to our cabins. On the way, we smugly hung our goon bags in the drying room and after a busy day, crashed out.

The next morning did not start well. I picked up my goon bag and stepped in, only to find that I was up to my kees in water. Yes, the zip had been undone all the previous evening. However, the wiser Eacs had hung his bag upside down so was already a step ahead. After a fine breakfast we opened the Airfield at 0900 and flew back to Culdrose and back into routine. As the Squadron Staff Officer, I went into the Office to check in with our Leading Writer. As usual, Scribes was in control, the Boss, Bushy Shrub was away at a FONAC meeting and on the run up to Christmas, things were winding down.

As I opened the first buff file, the phone rang and Scribes picked it up. “Yes Sir! St Mawgan, I know it, RAF place up the road in North Cornwall ” Yes Sir, no, the CO is away today but the Squadron Staff Officer is here”. Two things rushed through my mind. First, I sensed trouble and secondly I had better be the first to establish its form. I signalled frantically to Scribes and he handed me the phone. For those who are not familiar with the set up, Squadron Staff Officer is low in the food chain of FAA Squadron jobs, in amongst Stats, Sports Officer and Record Book Officer. However, in the RAF the title Staff Officer normally means an experienced and more senior person . I therefore opened the conversation by introducing myself by title with as much authority and confidence as I could muster. Wing Commander Ops then briefed me abruptly and tersely on the disgraceful behaviour of 2 824 Squadron Officers in the Mess the previous evening. I agreed with him that the destruction of the flowers and killing of several goldfish was indeed totally unacceptable and assured him that in the absence of the CO I would investigate the incident and take the necessary disciplinary action. I further requested that the Mess Manager, phone me as soon as possible with a financial estimate of the damage.

On hanging up. I briefed Scribes that no names were to be released but to expect a further call from St Mawgan, in which case I was to be the only person taking it. Eacs now needed to be in the loop. He was loafing in the crew room having just won his 3rd game of Ace Deuce, the crew room game of the day. I told him of the phone call and we agreed that we could discretely salvage the problem.

Back in the Staff Office I drafted 2 letters. The first to the Mess Manager, which both apologised for the behaviour of the 824 aircrew and ended with the line that the Cheque in recompense was enclosed. The second, to Wing Cdr Ops, explained the liaison with the Mess Manager and the robust disciplinary action being taken with the aircrew concerned. Just as this was done, the phone rang and following my conversation with the Mess Manager, I knew that the damage was a total of £80. That was a lot of money in those days, but Eacs and I were happy to pay up and the Squadron Social Sec laundered the cash through his account, wrote the cheque and thus kept our names off the paperwork.

Those letters, , typed up beautifully by the amused Scribes, and signed by a scruffy and illegible signature (mine) underwritten with Staff Officer, 824 Naval Air Squadron For Commanding Officer, Absent on Duty were then despatched.

No more was ever heard. We embarked again in ARK ROYAL in January after a richly deserved break heading for the Mediterranean and more adventures of both aviation and of a social kind.

Work hard, play hard, be professional, have fun. It has always been the case in the Fleet Air Arm and for Eacs and myself, indeed a close shave.