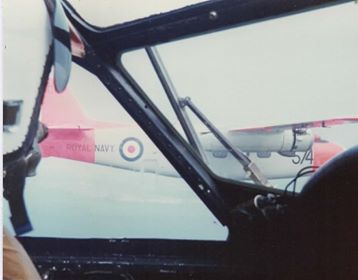 ‘Progress on the Observers’ Course was marked by milestones designed to demonstrate competence and, at the same time, a little relief from the interminable slog around the Western Approaches. One of these milestones was a land-away navex to Shawbury where the Observers’ Course would make an educational visit to the School of Air Traffic Control whilst the pilots turned the aircraft round, returning to Culdrose in the afternoon.

I had been on 750 Squadron for around six months but I seem to recall that I was still “tail-end-Charlie”, bringing up the rear of a stream of up to 10 aircraft, all flying the same route at ten-minute intervals. The weather was good for the time of year with nothing to give us any problems apart from a cold front which was forecast to lie across the route from RAF Shawbury to RAF Valley, our primary diversion; but we wouldn’t be going there, would we?

I was crewed with a Lieutenant Hill (Staff Observer) one Indian Navy Student Observer and we had a young WRN by the name of Ward along for air experience. Ward sat in the right-hand cockpit seat and was briefed to act as “Starboard Lookout” as appropriate.

We set off on schedule and the flight to Shawbury was quite uneventful, cruising at Flight Level 50 most of the way but, as we approached Shawbury, it became apparent from Shawbury Radar’s conversations with aircraft ahead of us that all was not well; all of us were being diverted to Valley not because of the weather but because, for some unknown reason, there was no AVGAS available at Shawbury. The weather front suddenly assumed a higher order of relevance because Snowdon was right on the required track and, at 3600 ft, would present something of a problem due to the icing conditions above it; to clear it safely and comply with quadrantal cruising levels we would have to climb to FL65 at least and this would take the outside air temperature down to below zero.

Up we went, and the student observer began furiously calculating our headings and timings whilst I explained to our young passenger what was going on. We settled down at FL65 for an expected 20 minute run before we could begin our descent clear of Snowdon.

After about ten minutes I began to be concerned; naturally, we were in cloud and the visibility was nil; I was taking careful note of the ice being shed from the propellers and striking the fuselage and keeping an eye on the ice forming on the windshield but what bothered me was the way the indicated airspeed was, apparently, slowly decreasing. The Sea Prince normally cruises at a stately 135kts but it seemed to me that the needle was slowly backing off; as I watched, it reached 130, 125 and then 120kts. I concluded that one of two things was happening: Either we were accumulating a large amount of ice on the wings and steadily becoming less aerodynamic and heavier, which would ultimately result in a stall and considerable loss of altitude, or the pitot head was icing up and the airspeed indicator would shortly show zero airspeed whilst the aircraft continued unperturbed on its majestic way. I couldn’t see the pitot head from the cockpit-it was hidden behind the starboard engine-and there was no way of telling whether the pitot heater was working after testing it during the pre-flight. I gradually increased RPM and boost and advised the crew that a stall might shortly occur, and briefed them that my intention was to recover airspeed as soon as possible and make an emergency descent under radar control from Valley; our final option was to bail out but this was something I wasn’t keen on as it would entail my following the Observers to the crew door at the rear of the aircraft, collecting my parachute from its stowage there, clipping it on and doing the same for my passenger before launching us both into the abyss. All this would take a very long time, during which it seemed likely that the aircraft might encounter something very much more solid that its current environment.

Further speculation became unnecessary; as the airspeed needle reached 115kts it dropped abruptly to zero; I held my breath. Nothing happened.

I advised the crew that the flight would continue normally except that I would have no airspeed indications for the approach and landing. I reset cruise power (well, I did add a little extra, just in case we were actually carrying some of that ice) and we called Valley Radar for descent, advising that we had no airspeed indications and could we possibly have an escort/guide for the approach and landing?

Radar replied by asking what speed we wished to maintain during the approach and, on learning that something less than 100kts would be quite comfortable, he replied, in a somewhat superior tone, that there was “nothing that slow” available; I wondered about the nine Sea Princes that had just landed but decided that getting one turned round and refuelled would probably take longer than my fuel endurance; I also considered asking for the SAR helicopter but it just seemed easier to show the Crabs that it could be done with or without their assistance!

We broke cloud at 3000’ over the sea and the air temperature was around 6 degrees, giving me the opportunity to try to shake the ice off the pitot head and carry out a handling check at reduced (estimated) airspeed; I reduced power and opened the sliding side window so that I could gauge airspeed from the draught, lowering half flap when I was confident that the speed was low enough. The airspeed needle remained firmly stuck to the zero stop. Having established a “feel” for the appropriate airspeed, I declared that we were ready for a radar to visual approach and we were positioned for the landing. Using standard power settings with an additional safety margin I flew the aircraft onto the runway at what seemed to me a fair clip; I never found the Prince much fun to land; its long, spindly undercarriage legs were too wobbly and flexible for consistency but it was a reasonable arrival under the circumstances. We cleared the runway and parked with the other nine cabs and, as soon as the chocks were in and the engines quiet, I nipped outside to take a look at the pitot head. There was a good two inches of ice still adhering to it!

After lunch (the Crabs are great at catering!) we all flew back to Culdrose in the customary stream, routing along the coast at 2000’ in VMC. Much more comfortable!’