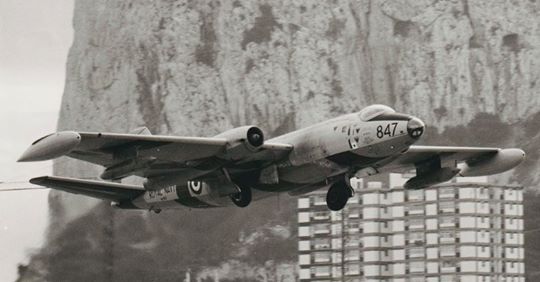 ‘One of our regular tasks on the FRADU Canberra fleet was the support of Principal Warfare Officers Course training in Gibraltar, usually for about a week. I was paired with Bryan, an experienced navigator and we took Canberra WJ 614 (callsign Broadway) to Gibraltar via Hyeres on January 25.

Everything was going well for the first couple of days. The ship, (a Tribal class frigate), day running out of the dockyard and the dedicated aircraft, a Canberra and a Hunter working it as required to complete the course requirements. For our part it included target towing with a Rushton Target. This was a radar illuminating torpedo like target towed behind about 3 miles of wire to provide adequate margins for the aircraft safety. We used a dedicated UHF frequency common to the Royal Navy in those days, channel 17. On this day however there was a problem with the channel. Gibraltar in those days was a very quiet airfield when the military were not there and so the WRAF controller in Gibraltar Approach said that her frequency was available for our ship to aircraft communication. And so the exercise began and everything proceeded as normal with Bryan and me doing race track patterns under the ship’s direction and we did one or two passes.

On the third target run (we of course are not privy to the evolutions on the ship) there were several almighty bangs to the right hand side of the aircraft. The Canberra was very nearly turned upside down and the target and 3 miles of wire were heading for the Mediterranean sea. Bryan said “what was that?” I said “I don’t know”, having checked we hadn’t lost an engine or anything else gone wrong with the aircraft. Bryan said “I think they are shooting at us”. Quick as a flash Bryan said on the radio “are you using proximity fusing?” Puzzled silence for a second. Then came a voice saying ”yes we are”. Bryan replied “tell your gunnery officer they work”.

Clearly the penny had dropped on the ship. Next over the radio came “check,check, check, we’ve fired at the aircraft”. At this point because she had heard everything, the WRAF controller clearly dropped whatever she was doing and came on the radio. “Broadway are you alright?” By this time I had got my breathing back to normal and said “yes but I think we will be returning early for a damage check”.

As it happened no damage was done. The target was not the first to end up with a watery grave. The matter went up the RAF channels, WRAF Controller to SATCO to OC Ops to Air Commander Gibraltar and met the Navy there but as we were OK and totally averse to paperwork nothing more was said. We spent a very convivial evening on board the Tribal that night and met the Captain and some very relieved Naval Officers. Whether they passed the course or not I do not know. The Captain was relieved that we were OK and not intent on making an issue of it. We didn’t have to buy many drinks in the wardroom that evening and we still have the souvenirs of that day holding umbrellas in our houses’.