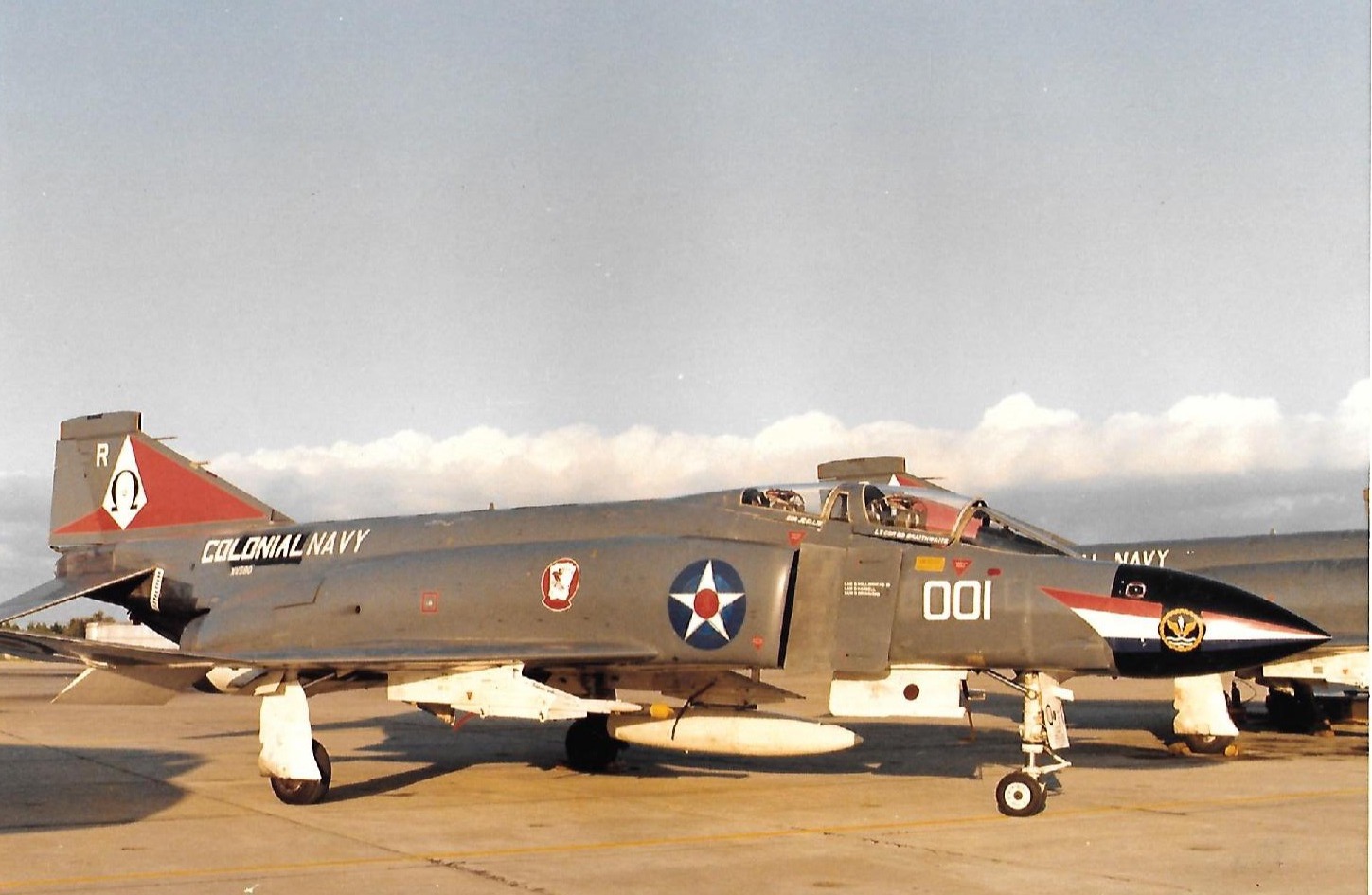 In 1977 I was posted on exchange duty to VF-171 at NAS Oceana, Virginia, the US Navy’s huge east coast fighter and medium attack sqn air station, situated near Norfolk, the world’s largest naval base.  VF-171 was a Replacement Air Group (RAG) sqn.  In the USN, student aircrew are, ominously, called ‘replacements’, and RAG sqns provide conversion for air and maintenance crews onto front-line aircraft types.  I served as an instructor ‘RIO’ on F-4J Phantoms (a RIO – Radar Intercept Officer – is what the USN calls the back-seat occupant of a Phantom, otherwise known as an observer in RN parlance).VF-171 hosted 892 Sqn in August ’78 whilst HMS Ark Royal was docked at Norfolk during her final cruise (her Buccaneer sqn also disembarked to Oceana and some of her Gannets and helos put ashore at NAS Norfolk).  At the end of their stay, as is customary, a couple of 892’s aircraft were given ‘special’ paint jobs, courtesy of VF-171’s corrosion control department.

Large VF-171 ’zaps’ were also applied (a ‘zap’ is a sqn badge).  VF-171’s skipper, Cdr Jerry ‘Devil’ Houston, was not best pleased when he saw the result, but 892 took it all in good humour!  After all, that’s what they did to some visiting aircraft themselves.  A photo of one of 892’s ‘Colonial Navy’-marked Phantoms is below. By the way, the aircraft in the piccy belonged to the CO of 892 at the time – Cdr Ellis, an observer, whose name therefore appears on the rear canopy.  The name on the front canopy is Lt Cdr Dave Braithwaite, who was a most competent pilot, as evidenced by his skilful handling of an emergency in early 1970 whilst airborne in a 893 NAS Sea Vixen from HMS Hermes.  The right main gear wouldn’t lock down, so Dave carried out a touch-and-go with right yaw applied, thus ‘crabbing’ the aircraft as it rolled down the deck and applying a lateral outwards force to the right oleo.  It was probably a micro-switch problem anyway, but problem solved!  A ‘four greens’ indication was followed by a normal arrest.  A superb piece of flying.