A Spot Of Bother With The Sea Vixens 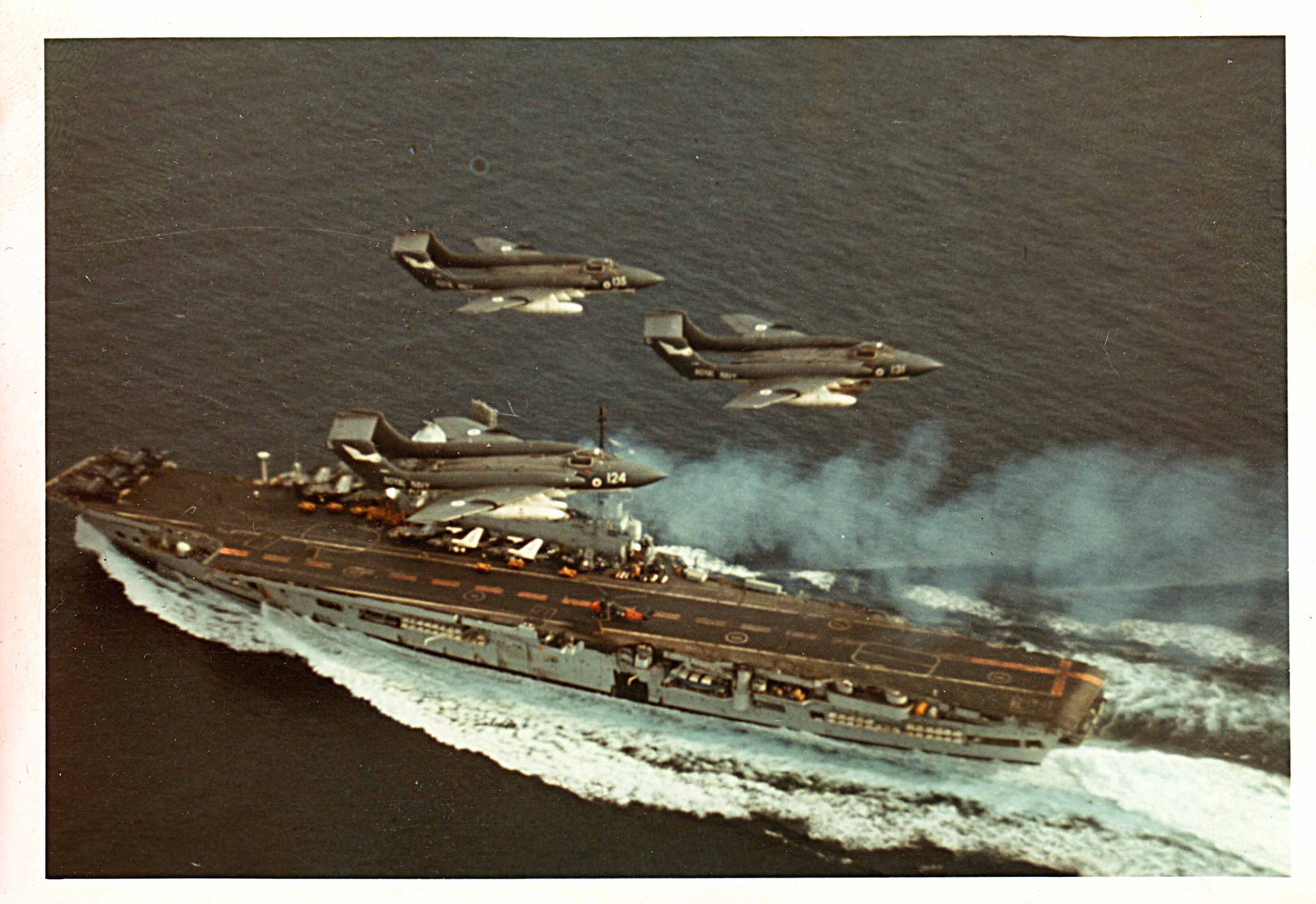 ‘Many years ago, when Naval fighters had two crewmen and some of them two tail booms and we had carriers with catapults and arrester wires, I was Duty Engineering Officer at Yeovilton. The routine in those days was that the professional Crash & Salvage Officer and his Chief worked days and, when things got more difficult in the dark of ‘night flying’, the part timers took over. I was summoned to the Tower this cold but clear winter’s night to be briefed on a spot of bother with a couple of Sea Vixens. One aircraft, ten minutes away, had a “green” hydraulic system failure which meant no Maxaret braking (ABS to the uninitiated) and no “power steering”. He would take the downwind arrester gear on Runway 27, and then be taken back to dispersal – no problem. The second aircraft, twenty minutes away, had an engine fire indication but not, in his opinion, a fire. He had shut down the engine, fired his extinguishers and was bumbling back on his other engine – again no problem. A third aircraft airborne at the time was an innocent bystander and would land in the normal way after the other two – yet again, no problem.

The first aircraft was being flown by a relatively inexperienced pilot – I know because he had only just graduated from the training squadron where I was the Deputy AEO. He missed the downwind arrester gear, left his hook down and eventually caught the upwind arrester wire. Now, an arrester hook that has been dragged over two thousand yards of concrete, albeit providing a display of sparks akin to Guy Fawkes night, does not readily release from the wire. Undeterred, the Duty Salvage Petty Officer and I headed off down the runway in ‘Salvage 1’ and, with the aid of sledge hammers, managed to free the molten lump of metal from the arrester wire once the pilot had shut down the engines. We then called up ‘Salvage 2’ to come and tow the aircraft back to its dispersal. If you think ‘Salvage 1’ was manned by part-timers I will leave it to the imagination who was manning ‘Salvage 2’. Anyway, ‘Salvage 2’ hooked up and started towing the aircraft back home along the northern peri-track.

The second, single engine, Sea Vixen then landed and was told that the peri-track to the north was blocked by a towed aircraft so would he care to turn left and take the long way home. Not too keen on staying in an aircraft that had threatened to incinerate him, he turned left and shut down his remaining engine just clear of the runway. We thought we would be smart and ask the fire Land Rover keep an eye on it until we could tow it back as well.

Given such minor difficulties, with which we were trained to cope, so far so good. The third Sea Vixen landed and was told by Air Traffic that the peri-track to the right was blocked by a towed aircraft so quite naturally he turned left. Now remember it was dark and a Sea Vixen had navigation lights – not parking lights. The third aircraft started to taxi into the back of the one that had shut down with the fire indication. Fortuitously? the crew in the fire Land Rover were on the ball, twigged what was happening and shouted in a panicky voice over the R/T: “STOP. STOP!”. Very commendable, but they were not on the same frequency as the aircraft… they were on the one reserved for Salvage wagons. Have you guessed yet what happened?

The driver of ‘Salvage 2’ heard the broadcast and slammed on his brakes. The braking system of a 3-tonner is not up to stopping 15 tons of Sea Vixen and the poor soul in the cockpit could not react quickly enough with the aircraft brakes, even if they had been working properly. The towing bracket on the salvage wagon snapped and the nose of the Vixen started violating the covered space above the tailgate.

For about two to three seconds we had the prospect of significant damage to three aircraft and one salvage wagon. Luckily, the third Vixen managed to stop with his windscreen a few inches from the tail-plane of the fire indication aircraft and the towed aircraft stopped with its radome in the back of the salvage wagon but not touching it. The Salvage section repaired their towing bracket the following morning and there was no damage to the aircraft’s nose wheel from the sudden shock loading.

So, the only ‘collateral’ damage (we didn’t actually use that term in those days) was a broken towing bracket on Salvage 2 but weren’t we very lucky? However, I would have loved to have met the idiot in Air Traffic Control who heard all the Avon engines shut down and felt he had finished his job. He turned off all the airfield lights literally leaving a lot of busy people in the dark’. 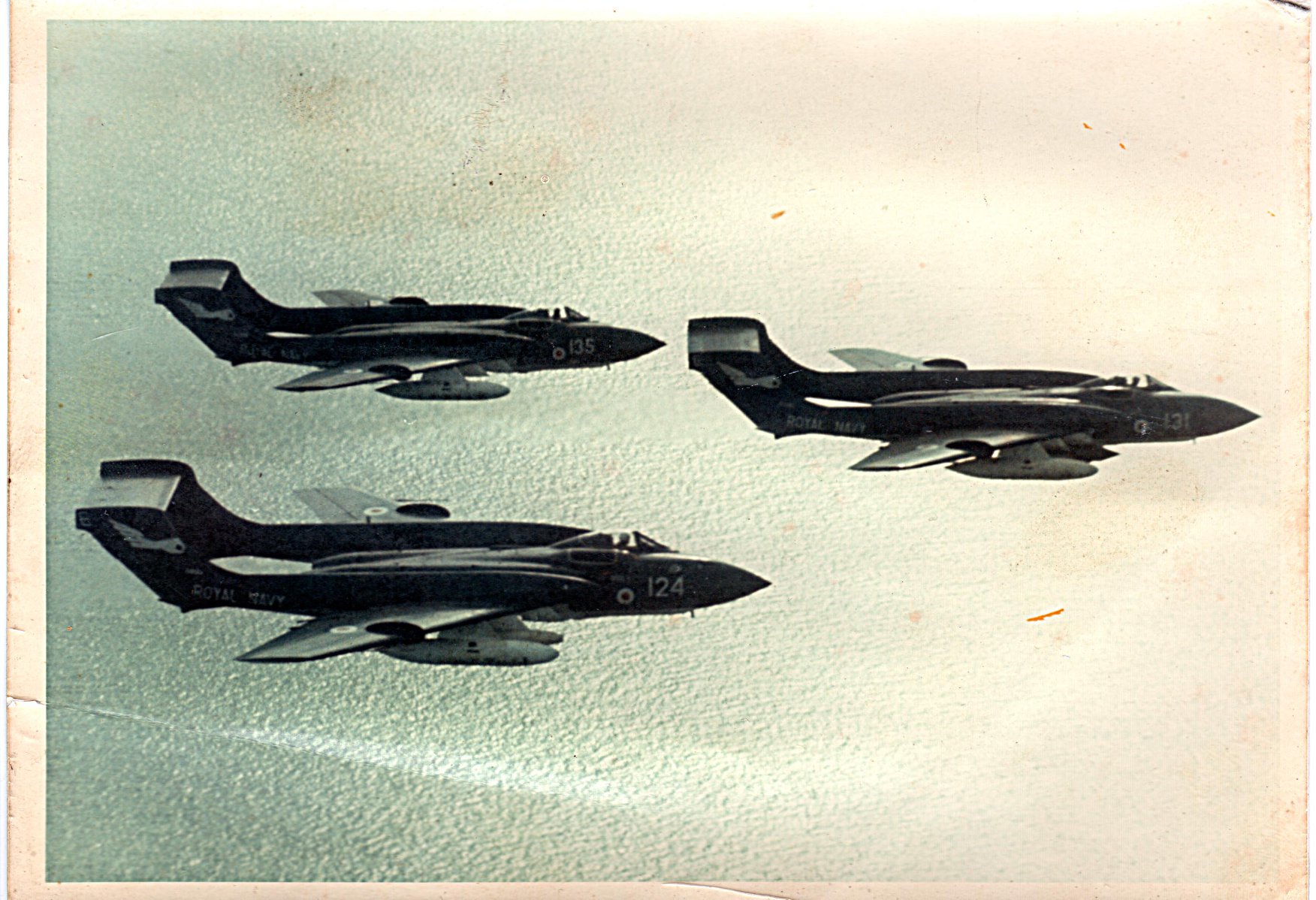