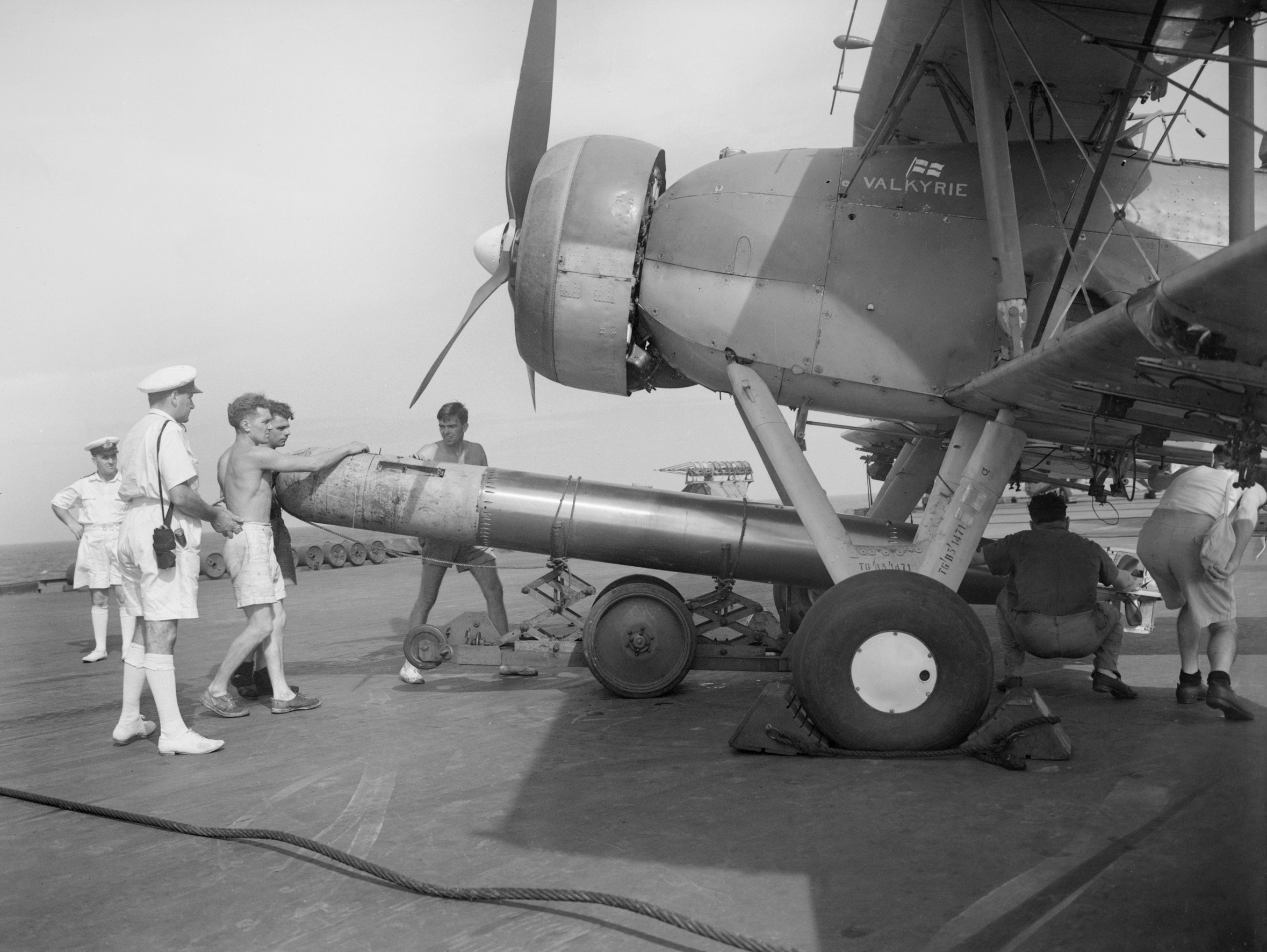 Arming the Swordfish. The torpedo carrying aircraft were the heavy brigade, the decisive arm of the operation. Their targets were the battleships.

In 1940 the Royal Navy faced a complex and grave scenario

In 1940 the entry of Italy into the war against the Allies, and the tragic fall of France, presented the Royal Navy with a problem more complicated and perhaps more grave, than any which a great sea power has ever had to resolve.

Thousands of miles of European coastline were firmly in enemy hands posing a serious threat to shipping in the Atlantic and North Sea; and in the Mediterranean, the long coasts of France and Italy, together with the strategic islands of Sardinia and Sicily, were also held against us. Furthermore, in North Africa we stood at an even greater disadvantage with vital re-supply convoys having to run the gauntlet the length of the Mediterranean from Gibraltar to Alexandria. And right in the middle of the Mediterranean, terrifyingly close to Malta, was the Italian naval base of Taranto – perfectly positioned to allow the powerful and modern Italian fleet to cut off those essential supply routes.

Strategically the position looked quite hopeless.

The only way to gain control of the Mediterranean was to go on a daring offensive. The plan to attack Taranto was first laid in 1938 when Admiral Sir Dudley Pound, as C-in-C Mediterranean, had directed the then Captain Lyster to develop a plan for an attack by the Fleet Air Arm Squadrons of HMS Glorious. The attack had been rehearsed and shelved, but it was doubly fortunate that when the time came for its resurrection, Rear Admiral Lyster should be flying his flag in HMS Illustrious and that many of Glorious’s experienced crews should now be serving in the new carrier’s Swordfish squadrons.

An attack on a well defended naval base was not something to be undertaken lightly especially in aircraft as vulnerable as the Swordfish. The risk to the carrier force itself also meant that the attack would need to be mounted at extreme range, from a flying off position 170 miles south east of Taranto. 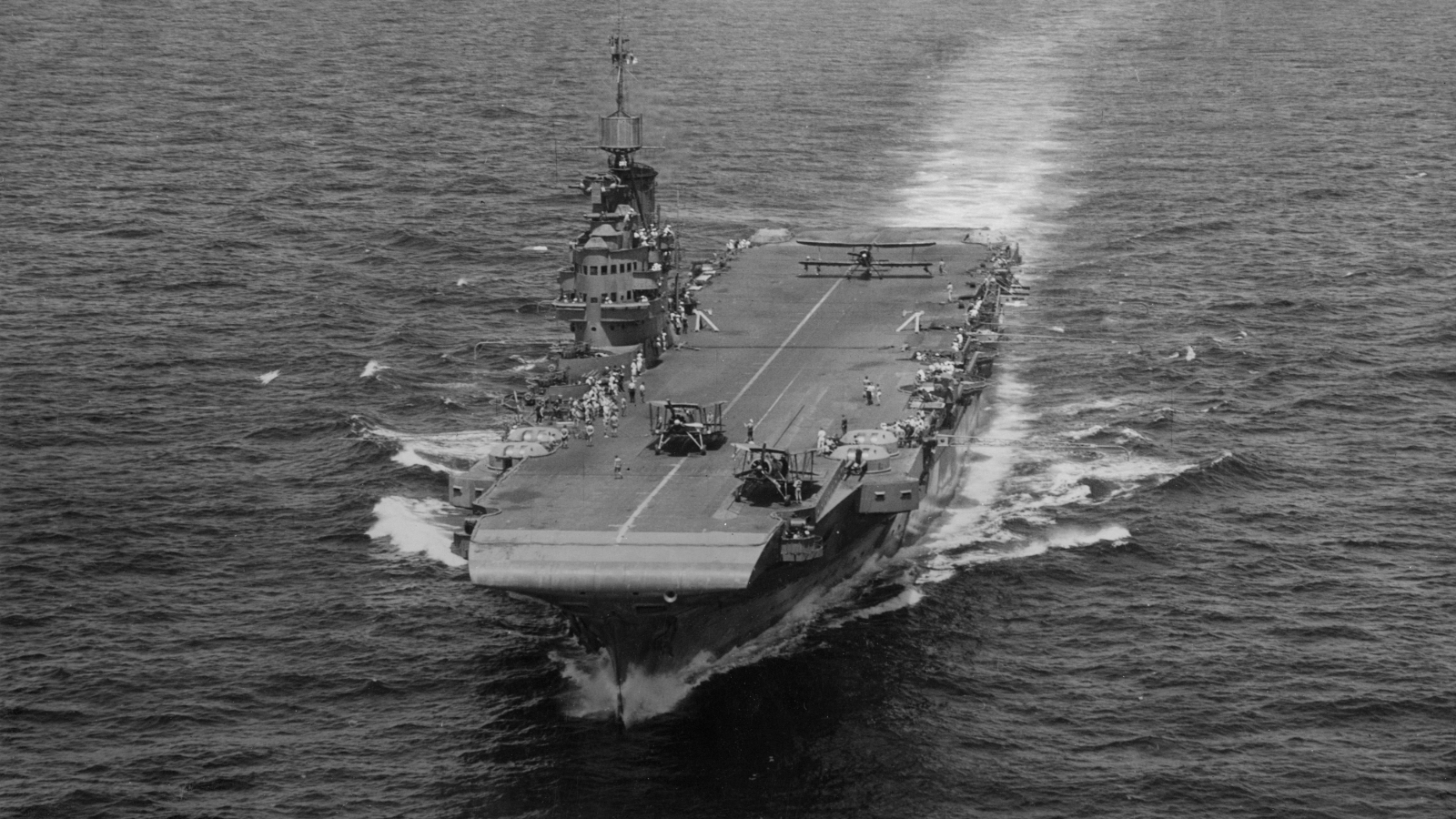 HMS Illustrious with her Swordfish Squadrons began a fast run in to the flying off position 40 miles west of Cephalonia at dusk on 11 November 1940.

This was double the range of the Swordfish, necessitating the replacement of the rear gunner with a large additional fuel tank, crammed into the rear cockpit. Barrage balloons, torpedo nets and anti-aircraft batteries all had to be reckoned with, and the all-important airmanship skills of torpedo attack, dive bombing and flare dropping, practiced day and night to ensure the Swordfish crews were at peak battle-readiness.

The attack was planned for the night of 21 October using 30 Swordfish from HMS Illustrious and HMS Eagle. The date had been chosen to coincide with a full moon. It was also Trafalgar Day – a good omen!  However, the plan suffered a major setback following a hangar fire in HMS Illustrious and had to be postponed.

A tentative plan for the end of October also had to be abandoned and a final, amended plan, with HMS Eagle out of the programme at the last moment with aviation fuel supply problems, and the number of aircraft in the strike force now perilously reduced to 21, was the one adopted for the next full moon on 11 November.

Although the delays and hasty rearrangements threatened to severely compromise the operation, the extra time enabled daily reconnaissance flights helping to build an improved situational awareness picture. The defences were formidable. There were 21 batteries of 76mm and greater calibre, 84 37mm and 20mm guns, and over 100 machine gun sites in addition to the heavy guns of the ships themselves. Supporting the guns were 27 balloons, 16 of them mounted on floats to protect the battleships and defending the ships against torpedoes, over 4,000 yards of torpedo netting was in position. The conversion of the Swordfish into a flying machine crammed with every kind of explosive and combustible commodity going, hardly made the affair less risky, but there was nothing for it!

The aerial reconnaissance confirmed that the entire Italian battleship strength, the brand new Littorio and Vittorio Veneto and four modernised battleships, Cesare, Duillio, Andrea Doria and Cavour were all moored in the Mar Grande, the outer harbour; and six cruisers, a large number of  destroyers, five torpedo boats and 16 submarines were also moored in the Mar Piccolo, the inner harbour.

By 20.40 on 11 November 1940, HMS Illustrious accompanied by four cruisers and four destroyers was in position 40 miles to the west of the island of Cephalonia. The attack was planned to be delivered in two waves with an hour between them. As each wave took off and the heavily laden Swordfish lumbered through the night, Operation Judgement was underway!