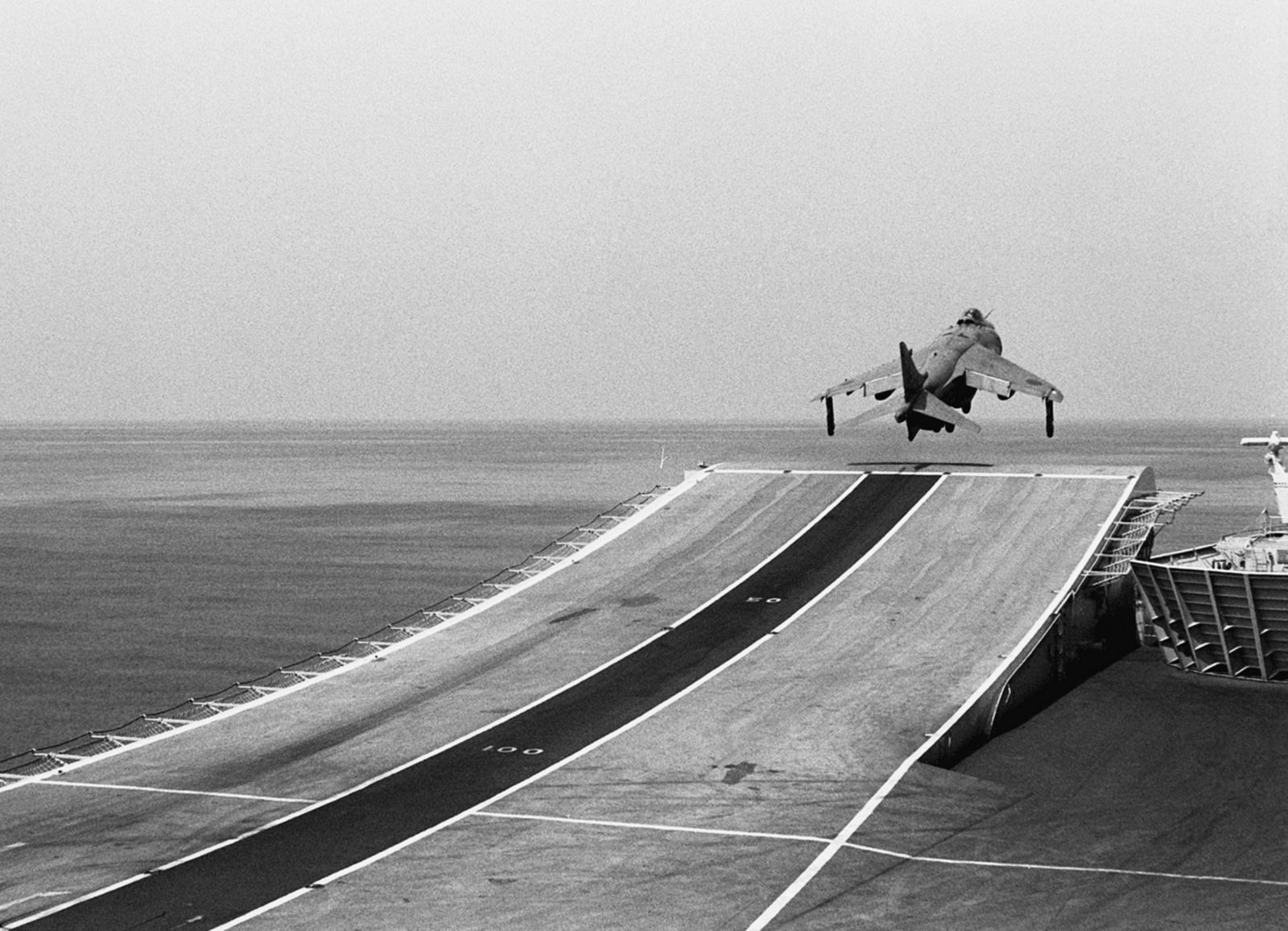 At that time we were dealing with a new aircraft and new servicing manuals which included many procedures that had never been carried out by anyone in the RN. As a consequence if I was tasked with supervising an as yet untried procedure, I would always go by the book, line by line. That way I could identify how these tasks could subsequently be carried out in a shorter time or different manner.

We were due to embark on HMS Invincible for a deployment and I was tasked with carrying out an emergency undercarriage blowdown flex op. This was something my boss wanted doing ashore so we knew the challenges we might face carrying it out on board.

The process required the aircraft to jacked up and undercarriage retracted. Because the process required 3000 psi of nitrogen to be blown into the undercarriage hydraulics system, this would cause a huge amount of OM-15 to be expelled through the vent pipes. So dustbins were placed under all the vents and we were ready. As a new process, this attracted a lot of interest from the pilots and engineers alike. So I had a large audience.

I ordered the mechanic in the cockpit to select the blowdown system operating lever. He did and and BANG. The undercarriage was slammed down 3 greens indicated and hydraulic fluid burst forth from the vents. All very exciting and over in a shot. The whole procedure took less than an hour and was now of no further interest, so the audience drifted away.

We were now face with the task of bleeding the system of the enormous amount of nitrogen in the hydraulic system. That entailed pumping in fluid and cracking open the bleed valves in a dozen different places whilst pumping the undercarriage up and down several times. We expected it to take us around 4 hours to achieve this, so off we set.

So far so good. So we selected up and pumped the undercarriage to retract whilst bleeding the up line. All went well. Next we had to select down and repeat the bleed on the down line. I ordered the rating in the cockpit to select down undercarriage and the guy on the hand pump to start pumping whilst the third guy bled the down line. Pump away I said but nothing happened. Pump harder..nothing. We got up to 2,500psi of pressure on the hydraulics and no undercarriage movement. I was scratching my head, when all of a sudden….a huge BANG and the undercarriage started to lower. The guy on the bleed valve turned white as the whole aircraft jumped in its jacking cradle. What the hell just happened? All seemed normal and we could see no problems as the system now seemed to be operating correctly. So we continued the bleed and all went according to the book. The final task was to reconnect the undercarriage doors retraction arm. The rating I detailed off to carry out the task tried for a few minutes and then came up to me…It won’t connect Chief. The arm won’t reach the door. That’s impossible I said. Let me try. He was right. What was wrong?

So I grabbed a torch and went inside the undercarriage bay to see what was going on. As I scanned around I was horrified to find a huge crack in the main frame on which the undercarriage is mounted. The blood drained from my head. Oh F**k. I called my boss Cdr Dick Goodenough into see the damage. To his eternal credit instead of exploding he simply said “that doesn’t look good, I think this aircraft is a write off” So followed the longest night of my life as I imagined I would be demoted for killing a Sea Harrier.
Next morning Dick called me into his office. “Sit down Neil and relax you’re off the hook” It transpired that Dick had been in contact with the MOD and discovered that there was a fault in the procedure written in the Sea Harrier manual. It had been picked up by the RAF but not passed across to the Navy for amendment.

It said “when disconnecting the undercarriage door retraction arm, ensure the arm is disconnected at both ends and removed”. If not the loose arm could theoretically be nudged accidentally and wedge itself on another part of the airframe causing a mechanical lock on the entire system, so that when selecting down the only way the undercarriage could lower would be by overcoming the mechanical lock with brute force, thus when 2,500 psi was exceeded the undercarriage mounting tears itself from the bulkhead frame. Subsequently the aircraft was sent to the RAF repair team whose repair apparently would have cost a commercial company around £1Million.

The moral of the story. Always go by the book until you know the procedure intimately.’