Captain Eric ‘Winkle’ Brown’s legendary career as naval test pilot spanned three decades during the most exciting and innovative period in aviation history. As the Navy’s Chief Test pilot he played a key role in the design and flight-testing of an entire generation of aircraft, pioneering many new technologies that gave the UK aviation industry a world leading reputation.

The birth of the Jet Age and the radical new designs it spawned, brought with it new levels of risk for the pilots who tested these aircraft but an aviation scientist at heart, Winkle relished problem-solving and finding ingenious ways to overcome difficulties.

His fearlessness and ability to remain calm in the face of danger set him apart as he pushed the boundaries of landing faster and heavier aircraft on aircraft carriers. Within a few years, the advances in jet engine technology saw the top speed of military fighters rise from a ‘sedate’ 600 mph to a blistering 1400 mph. 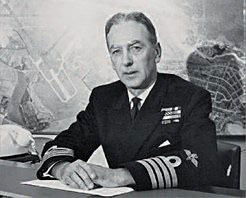 Born in 1919 in Leith, near Edinburgh, Brown joined the Fleet Air Arm in 1939 as a fighter pilot, initially flying the Blackburn Skua and narrowly surviving an attack from a Messerschmitt Bf 109 in a Norwegian fjord. In early 1941 he joined 802 Squadron flying Martlets from the Navy’s first auxiliary aircraft carrier, HMS Audacity, an 8,000 ton converted banana boat. He described landing on her tiny deck as ‘challenging to say the least!”

Audacity’s Martlets bravely fought off repeated attacks from heavily armed Focke-Wulf Condor bombers, using a courageous and death-defying combat tactic developed by Brown to attack them head-on!  On 21 December 1941 Brown survived the sinking of HMS Audacity when she was hit by torpedoes from a German U boat with heavy loss of life. “I will never forget that fateful day” said Brown. “The ship reared up so steeply that the aircraft plunged down the wildly tilting deck. She sank taking all her aircraft with her. I had just landed on, so was still wearing my Mae West lifejacket. I lost many friends that day and was very lucky to survive.” 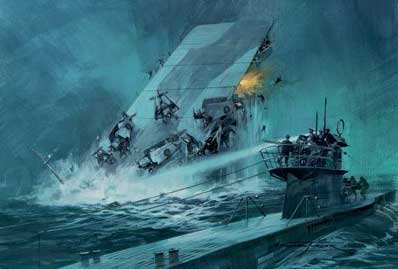 In the early days of the Battle of the Atlantic desperate measures were sought to reduce the dreadful attrition rate to allied shipping by German U boat attacks and Brown was soon back in the cockpit launching reinforced Hurricanes by rocket catapult from Catapult Armed Merchant Ships.

Testing up to eight different aircraft a day by 1944, word of this fearless flier began to spread, and towards the end of the War it had reached the ears of Winston Churchill, who singled him out for a special task.

Thus, in 1945 Brown was appointed Chief Pilot on a joint UK/US mission to retrieve Germany’s most closely guarded technological secrets, flying many captured German aircraft, including their top fighter, which was 125 mph faster than the British equivalent. “It was exciting but hairy at times!” said Eric. “The Germans were developing highly sophisticated aircraft and the aerodynamics of the wing configuration for Concorde stemmed directly from that mission.”

It was while on this mission that Brown’s War took quite a different turn. Fluent in German he was asked to accompany a medical unit to help liberate Bergen-Belsen concentration camp. The experience was to affect him deeply for the rest of his life including interrogating Hermann Göering, founder of the Gestapo and other senior members of the Nazi regime.

Throughout his career, Brown’s bravery, ingenuity and indomitable spirit was matched only by his fierce commitment to keep the Navy’s historic aircraft flying as an inspiration to future generations.

He once said: “Flying from ships at sea is a hazardous business. It was like playing Russian roulette and test pilots were routinely killed.”

He very much believed in keeping our heritage aircraft flying as a record of the courage, endeavour and technological achievements of British naval aviation. “After I am gone, I hope that the aircraft will be well looked after, and that the men who flew them and those who laid down their lives in them will never be forgotten.” He died on 21st February 2016, aged 97.

A commemorative event was held at RNAS Yeovilton on 21st July 2016, including a fly-past of many of the 487 aircraft that Capt Brown test-flew during his remarkable career.