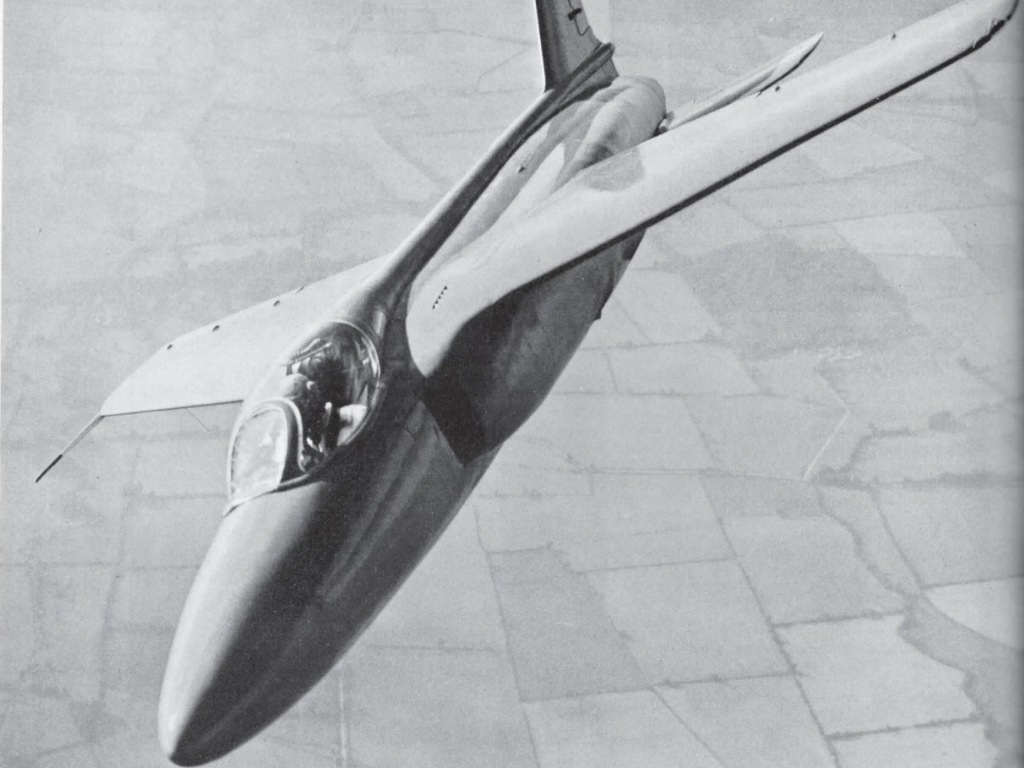 ‘Below is an interesting if slightly rambling letter that Tank Sherman (RIP) wrote to me as editor of Buzz several years ago. I met him on many occasions and latterly he had mellowed considerably from the gruff no-holds-barred Commander that I first knew in Singapore in 1971. He was a ‘career’ Naval Officer who had flown fixed wing in the 1950’s and at some stage did the SMAC9 course to qualify as a helicopter pilot, becoming one of the early Junglie CO’s, leading 845 Sqn in 1962. His first comments below were with reference to his time as a Midshipman, (all of whom had to keep a Journal of their Fleet training time). He went on to flying training after this period in Triumph and had stopped flying by the time I first met him. He came to HMS Albion as a staff officer in FOCAS observing 848 Squadron carrying out a night assault exercise on the East Coast of Malaya. You should buy ‘The view from a Junglie cockpit’ from the Navy Wings shop,…. the story of his flight with me on that night is in there’. John Beattie

We are now left with only four serviceable FIREFLIES on board out of the thirteen we started the cruise with. For some reason a lot of FIREFLIES have suffered damage in deck landings whereas SEAFIRE casualties have been very light which is usually the other way round”

SUGDEN was killed as a result of misunderstood batting signals (before my time on-board). He came lower when he should have gone higher causing him to hit the round-down where his Seafire broke in two. I think the change over of the batting system occurred long before Stan Orr relieved Willie Stewart as “Groupie”. And as I have mentioned there were no fatalities or serious injuries amongst aircrew flying from the deck while I was serving in TRIUMPH. There was a fatality when a FIREFLY ditched after engine failure and the Naval Airman on a joy ride in the back did not get out. Johnnie Matthews was killed at Halfar during a disembarked period when involved in a mid air collision (which was not his fault).

I find it in the highest degree unlikely that Wings would have unilaterally changed the batting system on his own initiative. As I understood it at the time it was felt by the “powers that be” that the British and Americans should adopt common batting procedures in order to facilitate cross deck operations. It was even further stated at the time that the Americans acknowledged that the British system was superior but on a sheer numbers game they felt that it was “easier” if our pilots rather than theirs were converted. Certainly the “new” system settled down and by Korean war days carriers were achieving 1,000 consecutive deck landings without accident. Not too much later came the mirror and angled deck.

In fact it was by no means unusual in those days for fairly strong language to be exchanged in the FAA! And not just language – “Slug” Notley even rendered his then Wings in VICTORIOUS unconscious with a well aimed blow to the jaw! And he still made Captain (I served him twice in that rank when I was Captain of Penelope in his Squadron and later as his Commander (Air) in Bulwark)

Obviously I was not in a position to judge “Drunky” Lewin as well as Stan Orr. But my recollection is of a Commander (Air) who was admired and liked by the pilots on board. I also saw him in action quite a lot when acting as his “doggie”. On one occasion a pilot made a fairly spectacular prang-landing and Drunky grabbed the Flight Deck broadcast and shouted “Smith (not his name) get up to Flyco on the double.” The pilot duly appeared and Wings said: “If you raised your seat so that you could see the carrier when coming in you would make a better job of deck landing” To which the pilot – who was very short and standing on the flyco deck while Wings was on the platform – only came half way up “Wings”,… replied: “Yeh? And you tell me – who’d work the rudder pedals” He punctuated each word with a sharp thrust of his finger into Wings midriff and then left “flyco” and repaired to the bar. Not much counselling in those days!

On May 20th 1957 I was carrying out camera Dive Bombing attacks in a WYVERN at Worthy Down when the canopy came off which was quite a startling experience! Stan Orr at that time was “Wings” at Ford and gave me a very hard time indicating his strong belief that such an incident could only be due to pilot error! I was eventually able to convince him otherwise (long story). He was a great man – but I suspect that his failure to go beyond Commander was not due to his fracas with Drunky Lewin. Stan was a passionate GNAT man – a plane which he reckoned could make the FAA a formidable fighting force with existing carriers and was totally opposed to the SCIMITAR which started the route down the path of ever larger aircraft which could then only be accommodated in such small numbers. I can still to this day remember many of Stan’s arguments (from the bar of course, I was not party to the meetings):

1. As the GNAT would have been very easy to deck land the existing (RAF) 10 fps undercarriage would have been adequate and no need to modify to Naval 14 fps specifications

2. Wingspan less than tailspan of WYVERN so no need for folding wings

4. Enormous numbers could be stowed… he even had a suggestion for further increasing stowage by putting a ring in the nose and sliding this over a rail as they were lowered to the hangar so that there could be racks of them (they were shorter than the hangar deck height)

At the final meeting at which the decision went against the GNAT, Stan is reputed to have said: “Gentlemen, you have just written the death warrant of fixed wing flying in the Royal Navy” and later Healey signed it.

I was and am a Stan Orr fan (canopies not withstanding) but I also admired what I saw of Drunky Lewin (who was NOT an alcoholic – certainly not by FAA standards and really only acquired the nickname to distinguish him from TT Lewin and he went on to become a very successful Carrier Captain in Korea I believe.

Mike Crosley’s great book “They Gave Me A Seafire” shows that Seafire deck landing accidents were commonplace before the batting system was changed and he also gave reasons why he thought this likely to get worse rather than better with the newer marks coming into service. Therefore I would have thought that it was disingenuous to suppose that the change in batting system was what caused SUGDEN’s death.

Finally I would have thought that Naval Historical branch ought to be able to give the definitive answer as to when the batting system was changed – and why!

Have we learnt a lesson that reversing control senses could ask for trouble? I think not. Every helicopter in the Royal Navy at one time had its rotor revolving so that increase of power required left rudder and – even more important – sudden loss of power (like engine failure) required immediate right rudder. So we then change our training helicopter from the HILLER to the GAZELLE which precisely reverses the rudder function from the operational aircraft they are to fly!

By John Beattie: The British Pacific Fleet operated intensively with a huge USN carrier force in 1945 and it was discussed at the time that there needed to be a common system of batting commands. The big problem came giving the ‘too high’ and ‘too low’ signals, which were exactly opposite in each Navy! Reacting urgently to the batsman’s signal was essential to get your aircraft to the correct spot on the flight deck at the correct speed and the instant interpretation of signals was vital.

A ‘Doggie’ was a Midshipman allocated to a senior officer as his Aide/Gofer/Runner/SLJO.

Below is the article Tank refers to that Stan Orr wrote promoting the ‘Light Fighter’ for the Fleet Air Arm. Interestingly the Gnat two seater was used by the RAF as an advanced trainer and one or two survive and still fly, soon to be joined by a very rare single seater, ex Indian AF I believe.

You can purchase John Beattie’s book from the Flight Store. 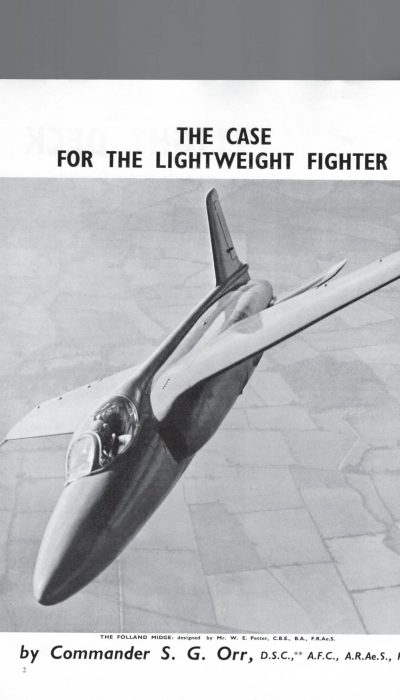 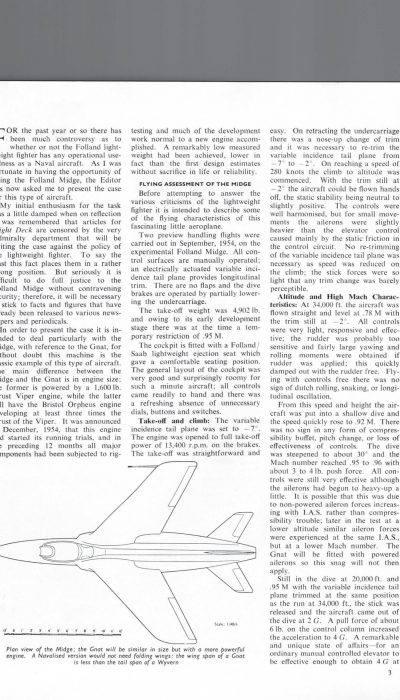 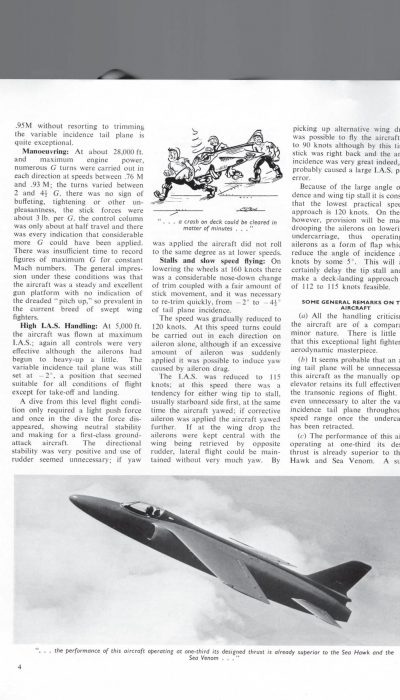 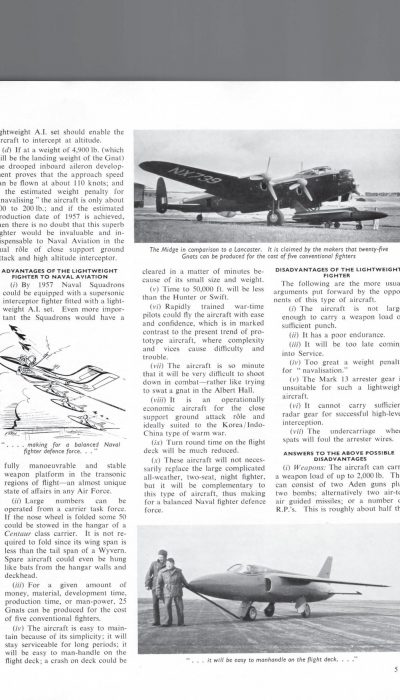 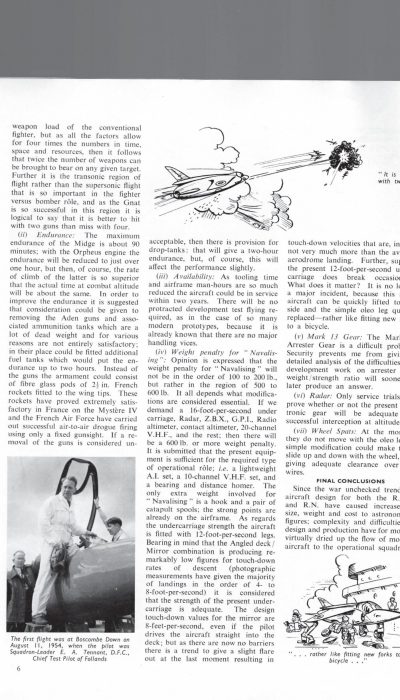 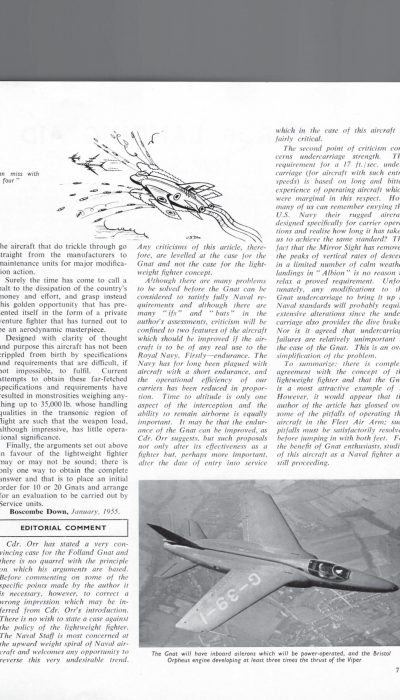