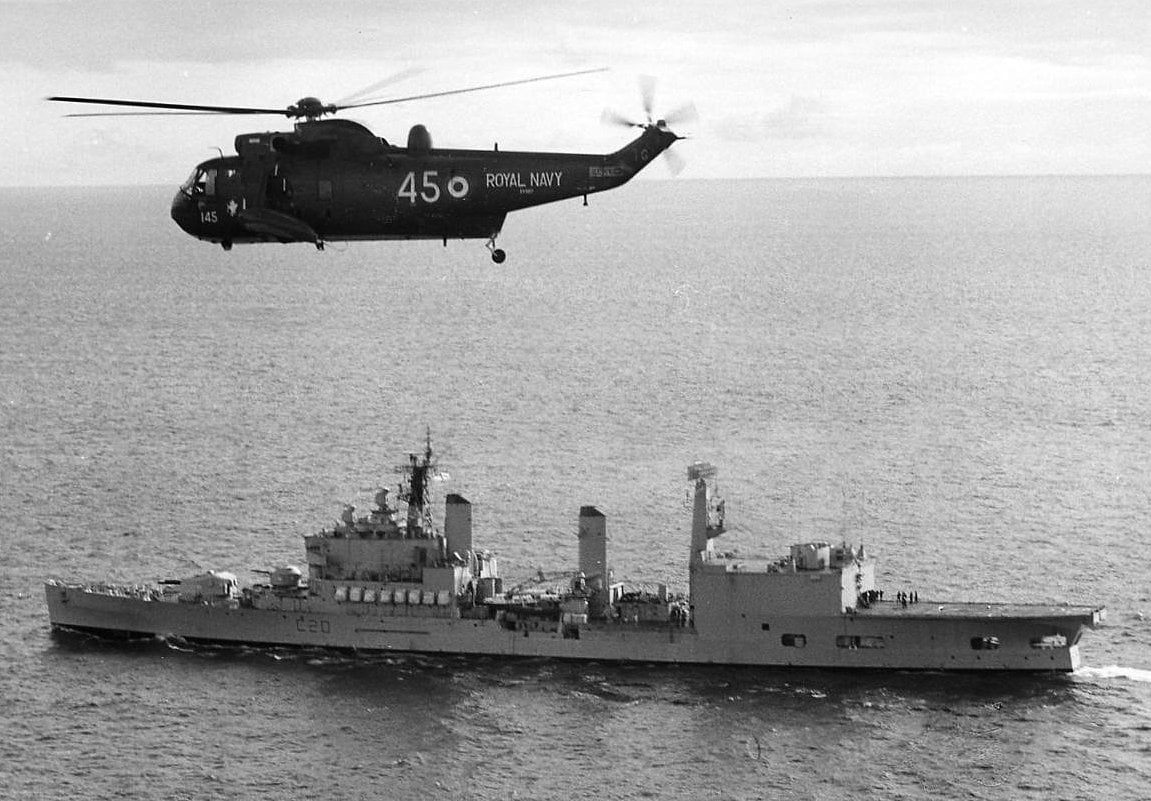 Whilst serving in 826 Squadron embarked in the helicopter carrier HMS Tiger in June 1973, we were tasked with providing an anti submarine screen for the flotilla which consisted of an assortment of RFA`s, a couple of RN frigates, a Dutch Navy frigate and some assets from the South African Navy. The flotilla was on passage from Gibraltar to Cape town where an official visit was planned as part of the deployment to the Far East.

Sea kings 144 and 142 were launched from Tiger and proceeded to their allocated sectors for a sonar search under the direction of the Scene of Action Commander who was in one of the South African Navy frigates. It soon became apparent that communication between the various components of the protective screen were not good and this, coupled with with poor sonar conditions contributed to an increasing sense of frustration among the Sea king crews. The two observers, Lieutenant David Baudains and Lieutenant Lofty Kimpton, an Australian on exchange to the Royal Navy, quickly assessed the problem and elected to operate in company along the lines of how the RN would have conducted such a screen. This drew somewhat garbled reaction from the Scene of Action Commander and the scene was further complicated by the arrival of an RAF Nimrod which announced he was dropping a sonabuoy pattern ahead of the Mean Line of Advance as this was the most likely position of a submarine threat. Repeated attempts to communicate with the Nimrod were unsuccessful and we could only assume that they had broken for lunch.

It was at this point that Lofty Kimpton transmitted that he had a sonar contact of dubious quality to the west of the flotilla heading away from the area at slow speed and that he would continue to monitor. The Scene of Action Commander immediately detached two of his escorts to the area of Lofty`s contact drawing a fairly ripe reaction and expression of frustration from the Australian who had been about to declare that the contact had disappeared and was no longer a factor.

The exercise continued along chaotic lines until Endex was declared by the Scene of Action Commander. On our return to Tiger a debriefing session was held during which the shortcomings of the whole exercise were aired at length, We were advised by our Operations Officer that a Washup Meeting was scheduled for soon after our arrival in Cape town and one Sea King crew was invited to attend. Lofty volunteered to go as he felt he had most constructive criticism to offer in terms of usage of sonar equipped helicopters.

The Washup Meeting was convened, attended by representatives of all participants and was surprisingly brief. The Scene of Action Commander, a South African Navy captain, blamed the whole debacle on poor communications and non standard R/T phraseology and, looking directly at Lofty Kimpton, said, the correct response to the message `Two cowboys joining from the north to prosecute your contact` should have been Roger, Out and not `Hi ho Silver.” With that and a toss of the head that Miss Piggy would have been proud of, he left the stage. Lofty`s contribution to the history of 826 Squadron had only just begun and he went on to carve an indelible and hugely entertaining mark during his exchange tour.