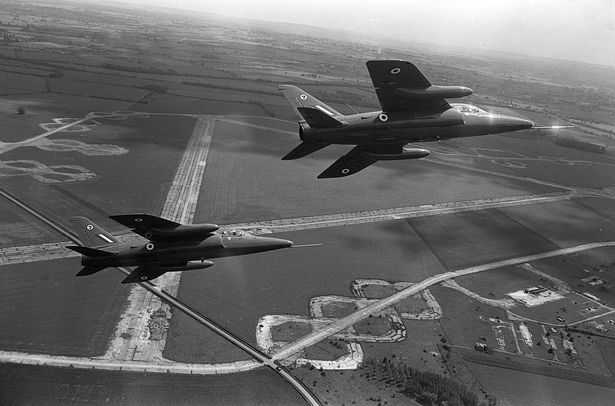 My QFI course was with 4 Sqdn at RAF Kemble (now Cotswold Airport) on the Folland Gnat. As there was no accomodation at Kemble, morning and evening transport was provided back and forth to RAF Little Rissington, some 30mins away.

At Kemble, the next door hangar and Flight Line was the home of the only other operational flying unit at Kemble – the Red Arrows.

When not course flying I took several opportunities to fly in one of the Arrows back seats and enjoyed the camaraderie. To the extent that I gave them the nickname ‘Crimson Crabs’ and to uphold the Navy end (I was the only Navy officer at Kemble), I took every opportunity to ‘broadcast’ the name when airborne! Of course, the Arrows reciprocated by endlessly asking the tower if the ‘Fishhead’ was airborne.

A few months later, the phone rang in my office at Leuchars. “JD, the Arrows are planning a Dining-In Night at Rissington and wonder if you’d like to fly down and join us?”

Well, no question about it – you bet I would! But what could I do to ‘enhance’ the Navy tradition! Well, after a bit of thought the answer was obvious and a few phone calls later a cunning plan slowly evolved. I needed the assistance of someone at Rissington and luckily I knew the very Baldrick character who had no doubts he could beg, borrow or steal a small truck from the motor pool for a few hours on the Friday, the day before the dinner.

On the Friday I flew an F-4 from Leuchars to Kemble and jumped on the 4 Sqdn evening transport to Rissington. ‘Baldrick’ was waiting and we quickly put an ‘Out of Order’ sign on a shower stall in the Officers Mess and awaited the arrival of the truck carrying a consignment from a couple of fishing boat skippers at Chepstow. Crabs that were normally thrown overboard.

Painting the crabs a crimson red continued long into the night. Just before dinner the following evening, I made sure the two windows I had earmarked were off the latch so the two ‘erks’ I had paid a fiver to each could open the windows from the outside and after the loyal toast shovel in the Royal Navy’s contribution to the after dinner speeches.

The guys on the team thought the Crimson Crabs scurrying around the Dining Room floor a hoot. Unfortunately this was not shared by the Wg Cdr President of the Mess Committee who invited me to the Ante-Room where he made his view quite clear on the conduct he expected from a Mess guest! Fair enough, I suppose I half expected it, but the Wing Co’s words didn’t amount to much as by now we were surrounded by congratulating team members who reminded him that nothing the Navy got up to at mess dinners should surprise him and if he was lucky his car wouldn’t end up on the Mess roof!