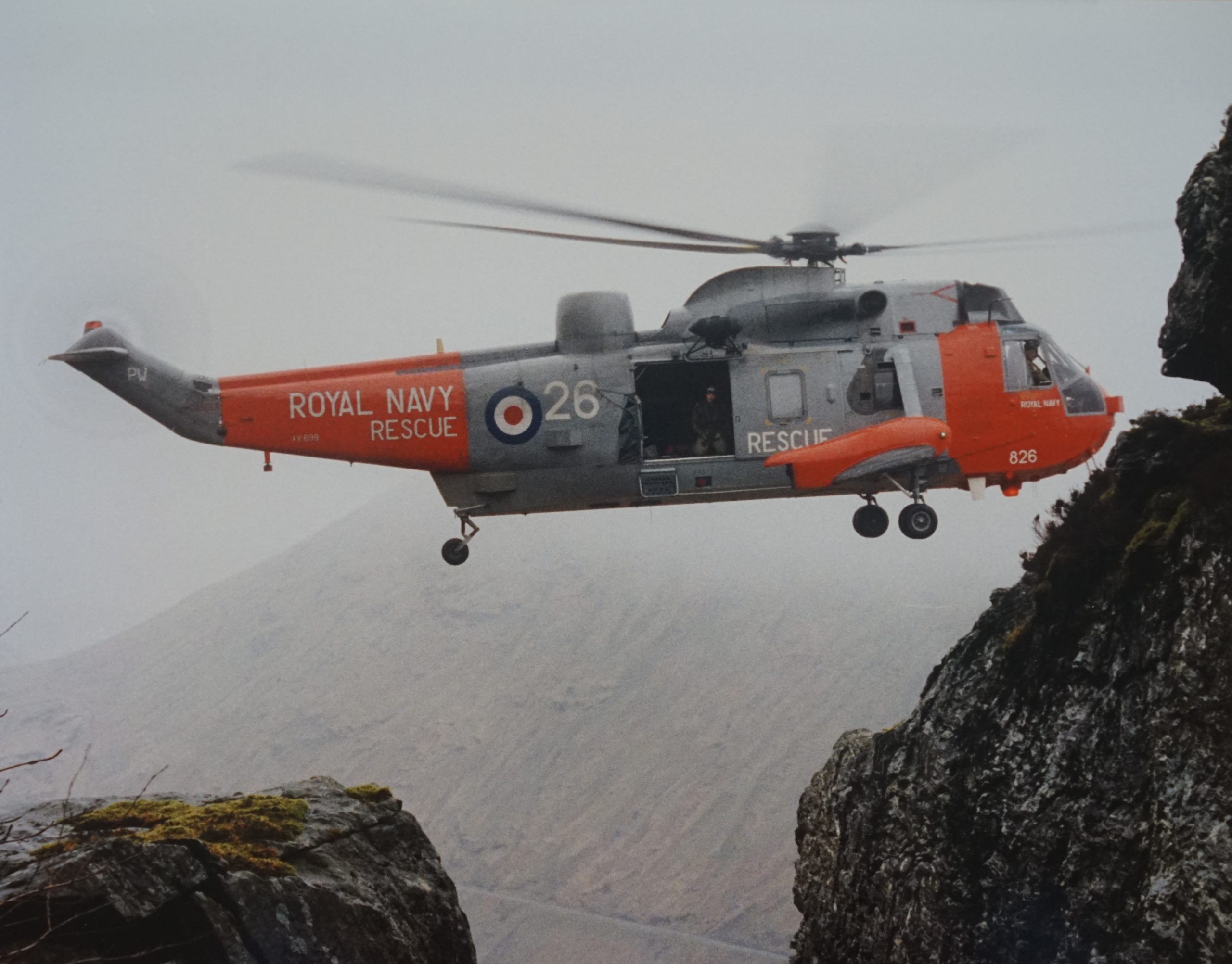 The scene was set on a grey, overcast, wintry day in Scotland on 7 December 1988, when I was the Duty SAR pilot and aircraft captain on 819 Naval Air Squadron, based at HMS Gannet in Ayrshire. This was just two weeks before we took part in a much larger SAR operation at Lockerbie, but that’s another story.

I have always had a certain admiration for the guys in the back who descend down winch-wires in all sorts of conditions and this dit is about the grittier end of that particular scale. For us helicopter pilots, the art of hovering is the key to success and it is required at some stage in every sortie, but it ranges from the very easy, to the extremely ‘interesting’, which this dit may help explain. At the easier edge of the scale it’s sitting over an airfield on a lovely summer’s day with 15 knts of wind and excellent references all around. For the uninitiated, you need some form of visual reference to maintain a hover, in order to see when you are drifting away from the mark and quickly correct for that movement. Easy enough when you can see the target and the ground is not moving, but it gets progressively more interesting when the reference point is moving in a rough sea and/or the wind is howling around you. If you then turn the lights down (or out) at the other side of the scale, things can really start to focus your attention. Of course, in this day and age it is perfectly possible for a helicopter to enter an automatic hover linked to a GPS co-ordinate, however, if you have to maintain position on a moving target that is not an option.

This particular call-out came in the early afternoon, when we were tasked to go to a fishing vessel some 140 miles west of Gannet, in the North Atlantic, about 50 miles north of Donegal in Ireland. The forecast weather on scene was less than ideal, with a Force 8 gale blowing from the South West and full cloud cover at 300 feet. Given the conditions, the decision was taken by the Rescue Co-ordination Centre to launch the on-call Nimrod as top cover. I had previous experience of a Nimrod providing co-ordination earlier that year at the Piper Alpha oil-rig disaster and despite what we say about Crabs, I was quite happy that ‘big brother’ would be watching, as this was going to be about the maximum range of our endurance, given the headwinds we would be facing to get there.

In this case we also took the local GP, Dr Jimmy Begg, who had volunteered to join us for any complex life-saving missions. Whilst the dark, noisy back of a Seaking smelling of aviation fuel and hydraulic fluid is strangely comforting to Naval aviators, it is well outside the civilian comfort zone and I also take my hat off to Jimmy, who always turned up when requested and never once complained about the conditions.

Luckily the Nimrod quickly located the fishing vessel, which confirmed that a crewman had suffered a suspected heart attack and they were able to guide us straight to the target, thus saving valuable fuel in a potential search. This is when it really started to get interesting, as the fishing boat was rolling around heavily in a 20 foot swell and the only option to keep some form of stability, was to get her to sail down-sea to avoid a large pitching motion. The only area suitable to lower a man onto was at the back of the boat, but to have the winch wire over that spot, meant that I could not see the boat from the cockpit, which is about 15 feet forward of the winch; back to the point about visual references! This was not something you covered in training and it was compounded by the fact that we had to hover about 80 feet high to avoid the rolling masts and fishing gear of the trawler.

I was now entirely reliant on voice commands from Jerry Scott, the winch operator, while he was also trying to lower Bob Yeomans down the wire, along with a stretcher, which was being blown around in the gale. At several times on the way down and indeed back up, the winch wire and high-line (a rope used to stabilise the winch) both became entangled in the trawlers rigging; this is where teamwork and training really came to the fore. Training as no-one panicked, but rather just got on with the job and teamwork, as the combination of a steady con from Jerry, coupled with signals from Bob ensured eventual success. I did have a slight moment of concern at one stage, as I was flying with my head stuck out of the window to try and see the boat, whereupon I thought my helmet had got stuck in the open window. Luckily brute force came to the fore and I managed to free it, albeit with a slightly scraped helmet.

We eventually got the poor fisherman into the aircraft and immediately set off back to Scotland before it got dark. Jimmy worked his magic in stabilising him and by the time he was delivered to Crosshouse Hospital the immediate danger had passed and he survived to fish another day. I guess the purpose of this dit is that you never really see the grittier side of SAR flying and I reiterate my deep respect for the aircrewmen and women who quite literally put their lives in the hands of their crew.