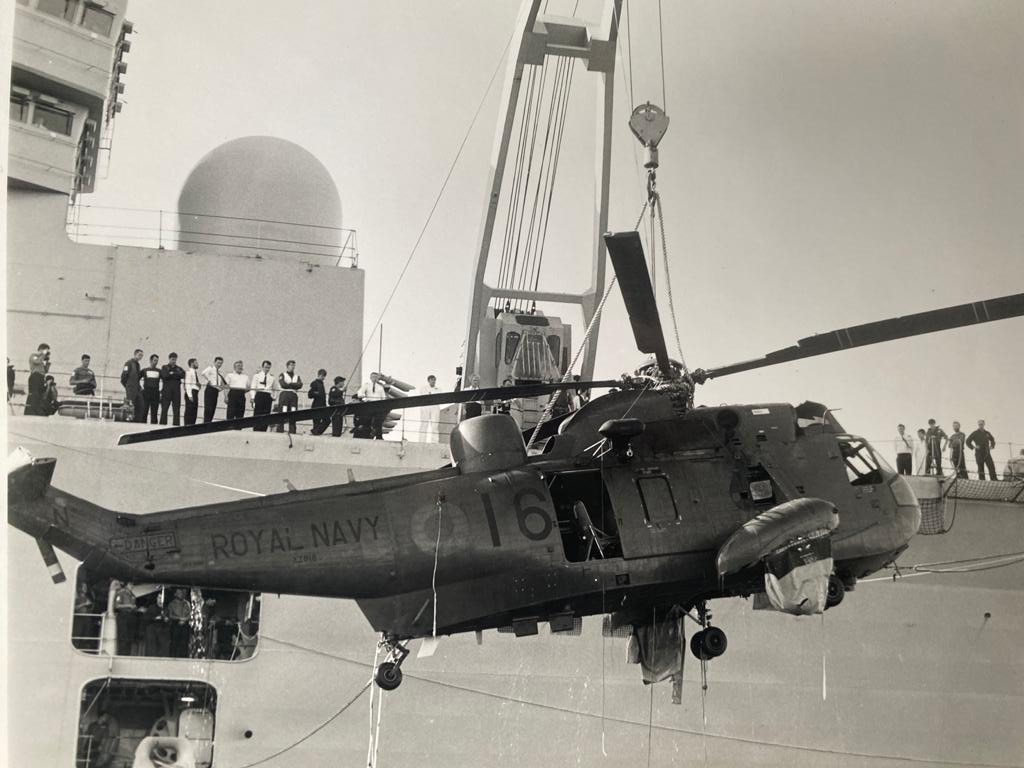 This story is set in the Mediterranean during the Autumn of 1985 and it took place in the middle of the large NATO Exercise Autumn Train, from the Air Group embarked in HMS Invincible. I can’t remember the exact date as I can’t find my Diving Log Book, which in itself is an interesting start to a flying dit! I was settling into my first tour as an ASW SeaKing pilot and was thoroughly enjoying life in a Carrier, which had been my aim through flying training.

The Carrier Air Group comprised my Squadron (820NAS), along with the Stovies in the shape of 801 NAS and the Baggers with 849 NAS (B Flight I think). I was to return to 820 in 1992 as SPLOT, but of course as a care free first tourist and Sqn Social Rep, these days of responsibility were way in the future and completely unimportant at this stage. We were settled into a fairly routine Ripple 3 and I had just landed in the early evening, when we heard the main broadcast burst into action with the pipe that you never want to hear – ‘Aircraft ditching’ followed by ‘Seaking from 820 Sqn with four POB has ditched to the North of us’. Luckily the crew all escaped unharmed and we quickly established through the grape-vine, that they had suffered a massive oil loss from the main gear-box. The aircraft was floating upside down in a Sea State 3 and it was now dark, which is where I got involved with another of the Sqn Pilots, Lt Nick Barker. We had both come from fish-head jobs into the flying world and, as both of us were qualified and in-date Ship’s Diving Officers, it made sense that we should get involved with the recovery. Both of us had dived with the ship’s team before and knew the ropes so about an hour after the ditching (circa 2200’ish), we found ourselves in a Gemini next to the cab, with Invincible about two cables away over-seeing proceedings.

Our first job was to attach some larger flotation bags to the aircraft lest she sunk completely and as we were in pretty deep water about 100 NM south of Toulon, that would have been game over. This was relatively easy and was not difficult from a diving perspective, however several Sonobouys had ‘popped’ in the back of the cab and there was literally hundreds of feet of sonar cable swishing around in the dark within about 10 feet of the inverted cab. We were acutely aware of getting caught up in it, as there are many parts of a diver’s kit which could easily snag in thin wire. If the aircraft was to sink attached to one of us, then things might have got significantly more interesting. The next phase involved the ship coming alongside the upside-down aircraft and lowering a long rope with a hook which we were instructed to wind round the rotor head, in order that she could be hauled upright. The large hook was quite heavy and whilst it may have been fairly easy for a bulky matelot to haul it around the deck, it wasn’t quite that simple when you were sinking with it and trying to adjust your buoyancy, whilst keeping clear of the sonobuoy wires. Nevertheless this was achieved, but the first attempt to haul her upright ended when the rope parted as the ship came too close, drifted over the cab and pushed the whole thing under towards the keel. Luckily the flotation bags did their job and she popped up again once the ship backed off.

Plan B was a heavier rope with the same large hook which suffice to say, didn’t make life any easier for us. This time it was successful though and we managed to get her upright. At this stage, however, I was surface swimming without a mask on trying to keep the lines free and as she rolled upright, several gallons of AVCAT, which had been trapped inside poured out all over my exposed head. Now I know we Aviators love the smell of AVCAT, but it is a different thing about 0500 in the morning when you are ingesting the stuff after a hard night’s work and so I found myself in sick-bay getting ears, eyes and nose flushed out with some sort of saline solution. 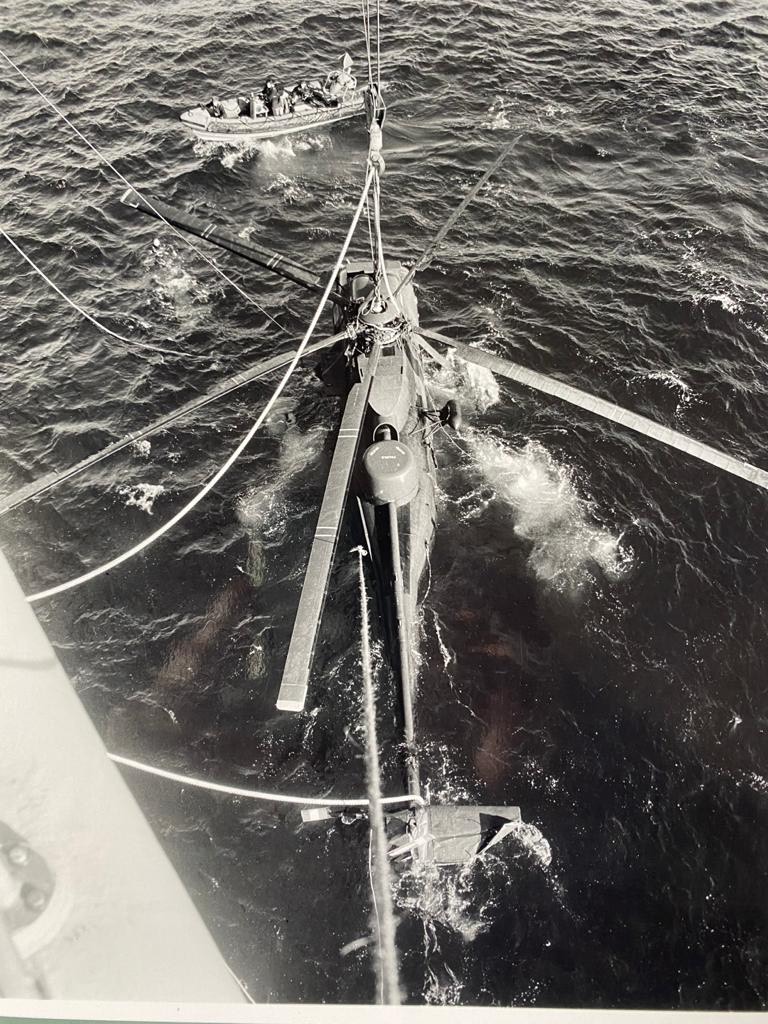 That was my part finished and when I was released in mid-morning, they had managed to recover her to the deck by attaching the ship’s crane hook to the top of the rotor hub (see pictures).

The sting came later when, after a few hours sleep, both Nick and I were summoned to the Sqn crew-room to be thanked personally by the Captain for the successful recovery of XZ 918, which I believe flew again. We were informed that we were to receive a cheque from the Ship’s Herbert Lott award scheme and, having some knowledge of salvage awards from a previous appointment, dreams of a fast, flash car on return to port were suddenly alive and well. Clearly, we had not yet fully appreciated the parsimonious nature of the Pusser and when we opened our cheque’s for £12 each, the fast car was again relegated to a pipe dream!