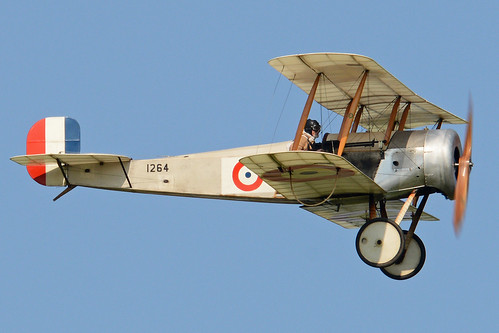 ‘Every flight in a rotary-engined WWI aircraft is an adventure. It’s said that their pilots can be divided into two types; those who have had a ground loop, and those who haven’t yet. In the 15 or so hours I’ve clocked up in our Bristol Scout, I’ve done so twice. Once was my fault; the wind shifted 120 degrees while I was dogfighting with an SE5A and I didn’t notice. The other time wasn’t. I was at Old Warden to carry out a practice display in front of a DAE. It’s a very simple airframe but I always take ages to preflight, and on this particular day I needed to make a small adjustment to the undercarriage axle, so was able to pay particular attention to it, and found everything in order.The flight itself was uneventful though it was one of the bumpiest days I’d ever experienced in her. The Scout has ample control however and I never felt anything other than total confidence, and after 5 minutes I lined up to land on the short southwesterly runway.

A word of explanation. A rotary engine can’t be throttled back far enough to descend. For a long descent, you open the throttle and shut the petrol off, and that huge propeller turns the 11lt engine over very slowly. When you get down to circuit height, you turn the petrol on and after a heart-stopping 5 seconds she fires up again. For landing, there’s a blip switch on the top of the stick which shuts down the magneto, and you use it intermittently on the descent to control your glide path. Once you are sure of making it, your thumb goes firmly down on the switch and you make a deadstick landing. Generally speaking the touchdown is pretty much the same as for any taildragger, but it’s the rollout that’s interesting. With no propwash over the rudder, and no brakes, you are a passenger until she rolls to a halt or starts a groundloop. If you feel one starting, it’s no use stamping on the rudder pedal unless you take your finger off the blip switch at the same time. And that will cause a big torque reaction and a smart acceleration, so it’s a decision not to be taken lightly! The Scout, unlike many other WWI aircraft, has powerful controls that give full authority right down to the stall, so the landing, despite the turbulent air above, was smooth and we started on the rollout. It seemed fine to me, though she seemed to be canted over to port and I wondered if the field had a slight slope or we’d got a puncture. After about 30 yards at around walking pace, she swung hard to port and tipped forward. Normally the landing is made deadstick with the blip switch pressed down, but my thumb slipped off the button and so there was a small amount of power on as she tipped up. Both propeller tips were immediately removed, and she came to rest.

When this has happened before, the angle of dangle is pretty extreme, and the pilot is left hanging in the straps and trying to resist the temptation to stand on the rudder bar, which is one of the two original parts from my Grandad’s machine and is therefore totally irreplaceable! But now the angle was such that I could clamber out unassisted to assess the damage. The first thing that struck me was that it had come to rest propped on the broken tip of the propeller, which was why the angle was less than normal. I looked at the undercarriage to see what was wrong there and found the port wheel off. I looked around to see where it was, but could find nothing.

A few seconds later, Jean-Michel Munn (Chief Engineer of the Shuttleworth Collection), who’d started the engine for me and watched the flight, turned up in his Mini with the wheel on the passenger seat. “Did you see it go?” he said.I looked puzzled and he explained that the wheel had fallen off the axle after three or four yards and overtaken me, going another 100 yards on its own! I retraced my track in the grass and could see where the port undercarriage had tracked straight for 25 yards – amazing considering the additional drag on the port side. When we came to study the wheel in J-M’s car it was completely unmarked, and fitted straight back on the unmarked axle to enable us to wheel her back to the hangar.

So what went wrong? Each motorbike wheel hub runs on a pair of bronze bushes which have steel flanges at each end to retain the wheel. The bushes are retained by a single 3/16in bolt passing through both. The bolt was missing from the port outer bush.

How could that happen? The bolt was aircraft quality with a metal locknut on the underside. There were no witness marks on the bolthole and we discounted the possibility of the nut unscrewing itself during the five minute flight and jumping up 2in before falling clear, so, like Sherlock Holmes, we are left with the conclusion that the only remaining option, however improbable, must be the truth, which was that the head of the bolt simply fell off, though it was under no significant strain at the time. The propeller needed replacing of course, and the tailskid had been broken, but the engine, despite having been so unexpectedly strained, was entirely undamaged. Jean-Michel Munn, who has more experience than most with ground loops on rotary-engined machines, was unsurprised. They are amazingly robust pieces of equipment and generally the airframe suffers before the engine does.

She’s back in the air again, and this time we’ve used two bolts per side to make sure it doesn’t happen again. And it so happened that the first time I flew her again J-M was test flying the TVAL Albatross, so we had the opportunity to do a little dogfighting. Our busy programme this year has been decimated by Covid-19, but I can’t wait to get back into that beautiful, if capricious machine: she’s every inch a lady!’

This story is from David Bremnar who restored Navy Wings associate aircraft the WWI  Bristol Scout in tribute to his Grandfather who flew her in WWI.