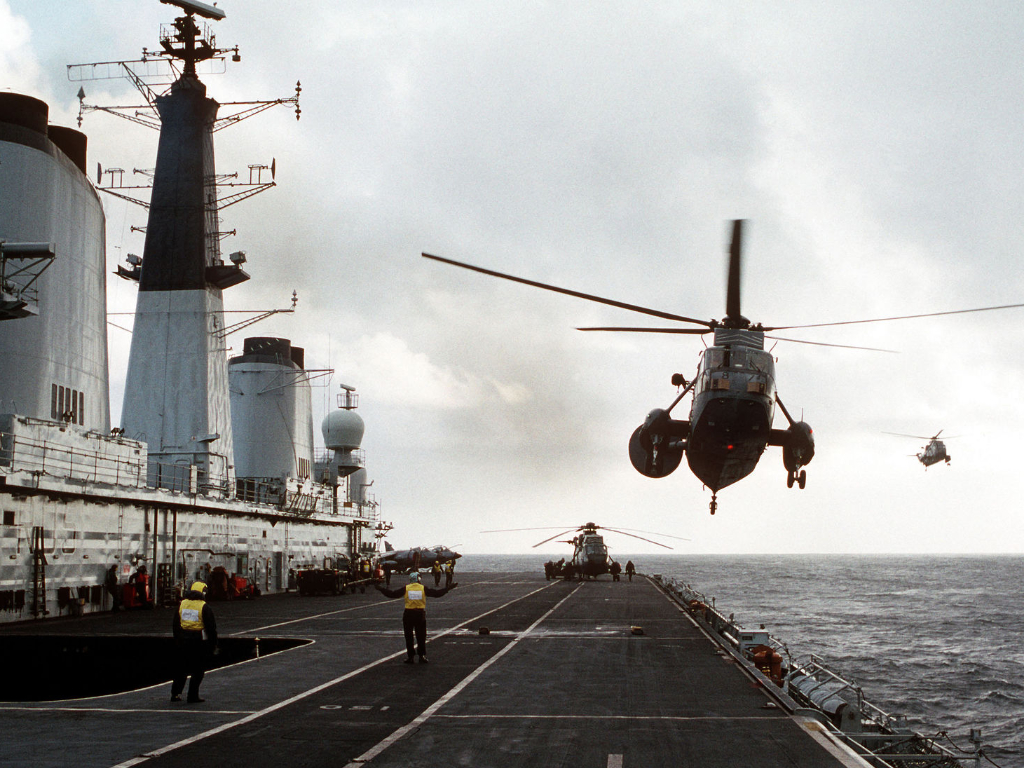 The day before the fleet sailed for the South Atlantic two extra Sea Kings Mk5s were given to 820 in HMS Invincible as fleet in readiness reserves.  This made it very crowded in the hangar as we already had the fleet’s reserve of Sea Darts stacked against the rear bulkhead.  Having had a discussion with the team, it was decided that rather than put them in suspension where they would fill two valuable spaces in the hangar and gather dust, we would add them to our existing compliment and operate as an 11 aircraft squadron.  This worked very well and the aircraft were often doing their bit on the screen or hauling stores round the fleet.  I don’t think the staff ever realised that 820 had grown.

Eventually the inevitable happened, one of our sister squadron in Hermes aircraft went AOG for the want of a utility cooling fan.  The signal came from the flag that as there were no spares in the fleet, Invincible having already declared that she had none in her stores, we were to rob a cooling fan from one of our reserve aircraft.  This we promptly did and dispatched it to Hermes.

The next morning at the ship’s AEO’s brief I mentioned that we were now one aircraft down for want of the utility cooling fan.  My opposite number in 801, Dick Goodenough, volunteered that they had lots of spare fans, which were fitted to cool the Sea Harrier’s avionics bay and that with the ambient temperature in the South Atlantic, he was sure that he could spare one if it would help.  It seemed an offer worth investigating so it was agreed that he would get one to us for us to see if it would fit.  To cut a long story short, though, being for a more modern aircraft, it was an axial rather than centrifugal fan, it used the same electric supply and by making a modified mounting bracket could be made to fit.  This we did and after running it on the flight deck to prove that it worked we signed it off as an emergency fit and the aircraft was re-tasked to its job on the screen.

Unfortunately at this point the staff in Hermes woke up and wanted to know why, as we had declared that we had no spare utility cooling fans, the aircraft was back on task.  Luckily JJ was in the picture and I understand advised that he was happy to take the aircraft off the screen provided that there was an alternative to replace it.  I assume that he knew full well that there was not so it remained on task and did several follow on sorties until a Sea King utility cooling fan arrived on an RFA coming south.  The Sea Harrier cooling fan was then returned to 801 with thanks.