Flight Sub Lieutenant Reginald Warneford was the first naval aviator to be awarded the Victoria Cross.

On 7 June 1915 he carried out a daring mile-high, moonlit dual with a German airship over Ghent, Belgium, dodging the Zeppelin LZ37’s machine-gun fire and climbing to 11,000 feet by pushing his aircraft to its limit. Diving steeply towards the airship he dropped four 20lb bombs directly on target, setting the airship on fire from end to end.

The terrific explosion that followed flipped Warneford’s Morane-Saulnier type L monoplane upside down and tossed it out of control. Recovering while in a precipitous dive, Warneford landed behind enemy lines and hastily conducted running repairs, fixing a fuel leak with his cigarette holder. After considerable difficulty in starting his engine single-handed, he took off again before he could be captured. Despite having to find his way back in thick fog he returned unhurt to his base the following morning after an extraordinarily courageous and resourceful attack.

Almost immediately King George V awarded Warneford the Victoria Cross. The threat to London from the German airships was a cause of grave concern and Warneford was acclaimed as a national hero. 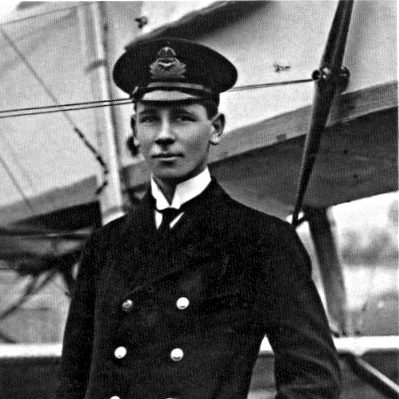 Combat flying was in its adolescence, and night flying in a combat situation had not even been tried. Yet Warneford fearlessly took on the Zeppelin and in true innovative spirit destroyed his target, repaired his aircraft and was home in time for breakfast the next morning.

Tragically, ten days after his award of the Victoria Cross, Warneford was killed in a flying accident when the right wing of the aircraft he was flying collapsed.

He was buried with full military honours in Brompton Cemetery, London.