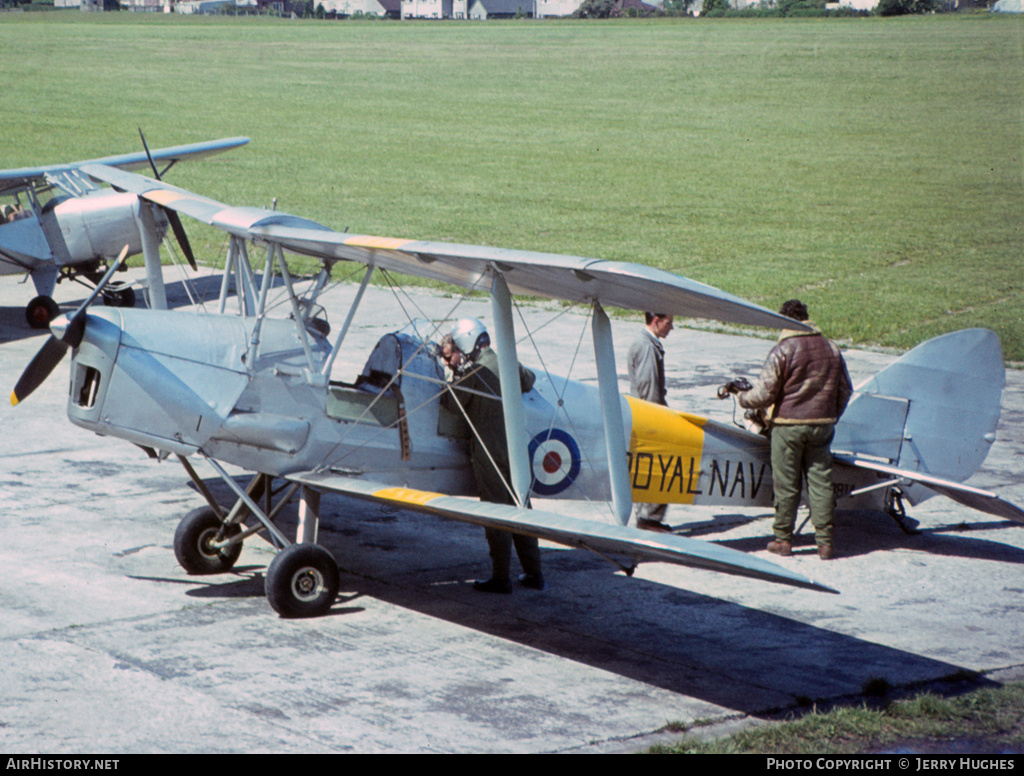 As a sprightly recently qualified A/S pilot, now trundling around Cornish skies with trainee observers in the back of my 796 Squadron Gannet, any break from the normal routine was very welcome. So, when a volunteer was called for to join Lt. Dave Laker for a ride to collect a Tiger Moth for recreational flying at Culdrose, I was swiftly ready at the door in flying kit.  A ride in the back seats of a 796 Gannet saw us to a rumble down the grass strip at Bramcote and, a short while later, an equally bouncy ride down the grass strip to be airborne in Tiger Moth BB 814. Three and a half flying hours later, after some proper “wind in my hair” flying, sightseeing down the Severn valley and a refuelling stop at Weston -super-Mare we were back at Culdrose. Some “recreational” weekend trips later saw me checked out and a qualified Tiger Moth pilot.

A while later a signal was circulated for any qualified Tiger Moth pilot to act as a tow aircraft for air launching the gliders for Dartmouth Cadets attending the Summer Gliding Camp back at Bramcote. By this time BB 814 had been returned to Bramcote for this specific duty and was available with T 6296 and NL 879. As a sprog member of 796 my immediate presence was not essential, so once again, I volunteered my services.

After my arrival at Bramcote, the next morning I had a half hour or so sortie to get used to the local surroundings, then I was off on my air launching glider towing duties. Taxi out to the end of the tow cable and get hooked on and wait whilst a glider was hooked on the other end. When the tow was gently tensioned and all was ready an “All out” signal from the ground crew by the glider was relayed to me by another alongside the Tiger. Ease the throttle forward and, as the glider eventually lifted clear of the ground, gradually build up sufficient speed for us both to start a sedate but steady climb to 2000 feet, with the automatic leading-edge slots popping out if we were getting a bit too slow. Circle the airfield until the crew in the glider reckoned to have found some upcurrent lift. When they were ready, they would release the tow, indicated by an immediate response in the liveliness of the Tiger Moth’s handling. Then back to the circuit for an approach and drop the tow cable a little way into the landing strip before a quick low-level circuit and land, ready for the next sequence.

In the evenings if the programme was on schedule, I was taken in hand by the gliding instructors and introduced to this strangely, and rather disturbingly, quiet form of aviation, becoming sufficiently proficient to gain A and B gliding certificates. In those quiet evening hours, it was possible to hear almost all the conversation between student glider pilots and their instructors.

The cockpit instruments in the glider were few and fairly rudimentary in nature. The “slip” indicator of the turn and slip instrument, for example, was a long tuft of wool tied to the pitot head just ahead of the pilot. As a supposedly experienced aviator I quickly learned to act with appropriate attention to my flying accuracy. If I was to avoid embarrassment, the need for this was demonstrated by the following exchange between an instructor and pupil on the gently curving approach to a landing.

Instructor: “Are we in balanced flight?”

Student: (after a short pause) “Err, no sir. We’re skidding.”

Instructor: “How do we know that?”

Student: “The bit of wool, sir. It’s sticking out to one side.”

Instructor: “So what should we do?”

Student: “Put on some rudder, Sir”

Instructor: “That’s right, then you’d better do so.” But then after a short interval,

Instructor: “Not that rudder you idiot.  Try the other rudder!”