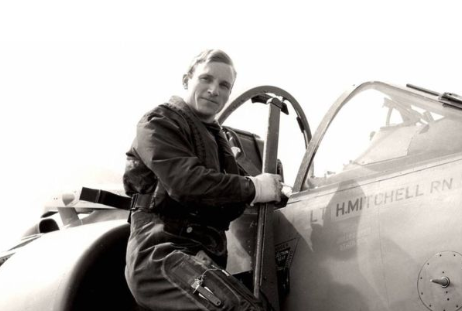 ‘Although it all turned out OK in the end, Henry Mitchell’s crash of a Sea Harrier in Monmouthshire in May 1991 wasn’t quite as cut and dried as reported in the press. What transpired was a particular conspiration of events that led to much confusion around who had crashed that day and how. Until now, this story has only been told in bars around the bazaars whenever old Sea Harrier mates get together…let me explain.

On that fateful day in May, five Sea Harriers of 801 squadron were planned to take part in a low-level Simulated Attack Profile (SAP) on targets in Wales and Herefordshire. The attack element was led by Clive Baylis with Henry as his #2 and Paul Simmonds Short (or SS for short) as his #3. I was to lead a pair of Sea Harriers designated as the ‘bounce’ which meant we would act as enemy air defence and try to shoot down the 3 Sea Harriers conducting the attack.

SAPs are a tricky proposition…flying at 250 feet above the ground at 420 knots is hard work at the best of times but if throw into the mix another aircraft trying to shoot you down whilst you’re at it, the pressure quickly mounts to make this one of the hardest evolutions a fast jet multi-role pilot can undertake.

On the day of the sortie, I took off 10 minutes before the attack element so they could preposition. My #2 went unserviceable before the start so I was left as a singleton. The attack element took off and adopted their pre-briefed formation called Escort, a triangular formation with the leader at the apex and #2 and #3 at each corner spaced at 2000 yards separation between each.

All was well until the home leg coming back through Monmouthshire. Henry and SS had lost communications with Clive (the leader, who unbeknownst to them had suffered a total radio failure) and to add to their problems, they couldn’t see him anymore as the formation had become stretched. It was at this exact moment that Henry had his difficulties and had to vacate his office in a hurry.

The trouble was, SS hadn’t seen Henry eject from his position 2000 yards abeam as all the action had happened with a hill in the way. 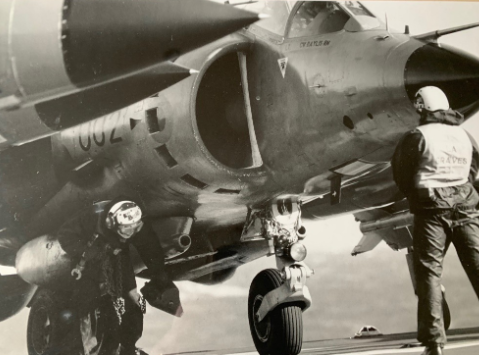 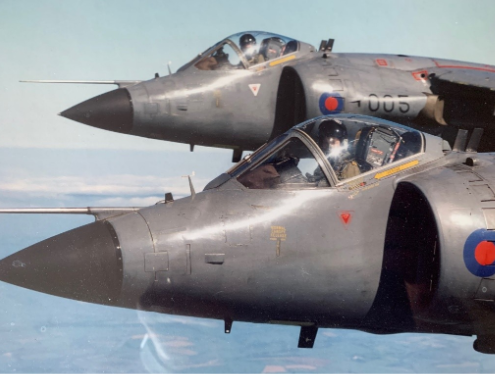 One, SS heard an emergency auto tone from a Henry’s Personal Locator Beacon (PLB) on the distress frequency on his radio. This is designed to go off as a pilot ejects to let everyone know there’s an emergency (but more usually they were set off by unwary pilots forgetting to disconnect himself from the seat properly at the end of a flight). He instantly knew someone was in trouble.

Two, Henry’s jet, which as he left was plummeting toward the ground, suddenly became lighter by several hundred pounds of Henry plus his seat. Physics took over, the nose came up and a pilotless Sea Harrier started towards the heavens. It then ran out of steam, turned 180 degrees back the way it had come and crashed into the Monmouthshire countryside at some speed.

SS hadn’t seen Henry’s ejection due to terrain but now put two and two together and came up with 7, a product of too much information in a high-pressure scenario. On hearing the emergency PLB on the radio, he looked across at Henry’s jet (which was still there at this point due to point 2 above but was, in fact, pilotless as Henry was tucking into a cup of tea on the ground). On seeing Henry’s aircraft pitch up and reverse direction, he automatically assumed that the source of the PLB was Clive and that Henry was going back to look for him. It must have come as something of a shock then when he witnessed Henry’s jet plough a rather large furrow in the Monmouthshire countryside.

Running short on fuel and not wishing to make it a clean sweep, SS headed back to Yeovilton spending 20 agonising minute wondering how he was going to explain this to the Boss that both his leader and #2 had both ejected and he had absolutely no reason why. Allegedly, he thought himself something of a Jonah and that no-one would want to fly with him ever again – bless him.

Fortunately, when he landed and saw Clive, with the look of confusion on his face slowly disappeared as he realised what had actually transpired (although some would argue that the experience has left a permanent look of confusion imprinted on his boyish good looks). As for me, I went up and never saw any of them for the whole sortie…but I still claimed to be the only aircraft that achieved his mission that day’