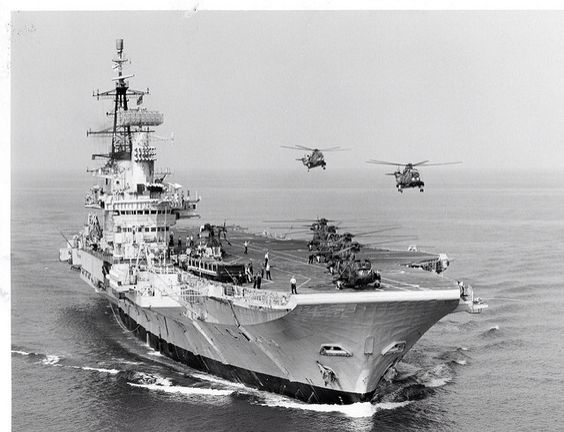 In 1975 I was Ops 2 in Hermes and in March that year the ship deployed for several months in the western Atlantic, with the first stop being the US Navy base at Roosevelt Roads in Puerto Rico. The passage plan included visits to a number of islands in the West Indies, and time on the ranges at Vieques. Then on to Halifax and down the St Lawrence River to Quebec and Montreal. 845 NAS had embarked with their Wessex V, together with 42 Commando. In addition, the Prince of Wales had joined with his Red Dragon flight of two Wessex aircraft. He had recently completed operational flying training in the commando role at Yeovilton, and with his team had embarked for the duration of the deployment. He had his own instructor pilot, aircrewman, and medical backup, and regularly flew sorties as a solo pilot throughout the trip. However, on each occasion that a part or widget in either of his two Wessex was changed, the aircraft had to be flown by his personal instructor for a significant period – just to ensure that all was well before HRH climbed aboard. This was somewhat wasteful in terms of aircraft flying hours and spare parts; and although the procedure was later rightly assessed as being unnecessary and not used for the later princes, it did indicate the importance of keeping the King Designate in good health at all times, avoiding risk whenever possible. There was great competition amongst the Royal Marines to fly with the Prince, but when the late Lord Mountbatten had wind of this he exclaimed that he failed to understand why: his view was that they would have been much safer flying with one of the more senior and experienced pilots.

The ship arrived in Puerto Rico on a stiflingly hot and sultry Friday afternoon, having left a damp and windswept Plymouth some ten days previously. The aircraft were aligned on the flight deck for the formal entry into harbour, and were left in their positions for the weekend. For many, a hectic two days followed, as Royal and the ship’s company explored the bars and night clubs around the island. On the Monday morning, the flight deck team set about repositioning aircraft and generally preparing the deck for flying operations. The lift driver, a young lad away at sea for the first time, had hugely enjoyed his weekend, and crouched down at the side of the lift, now turned the lever to lower it to hangar level, as instructed. Somehow he and the rest of the adjacent personnel failed to note that one of the Red Dragon aircraft had been parked with the front wheels on the flight deck, and the rear wheel on the lift. As the lift descended, in due course the solid steel deck edge came into heavy contact with the underside of the aircraft, causing what appeared to be considerable damage to the Royal helicopter. The nausea levels around the ship, but particularly amongst the command team and the aviation department, reached new and previously unseen levels, as a number of investigations commenced in the search for a culprit. Investigation teams also flew out from the UK that same day, such was the concern. In the event, the damage was relatively straightforward to repair, and life carried on. But the sensitivities of operating with these VIP aircraft never diminished. Those departments not involved were highly amused by the affair; and proceedings were dealt with at the highest level within the ship, fortunately for once not involving the operations office.

Much later, as Hermes departed the St Lawrence for the open Atlantic on the way home, a message was received from the Quebec Liberation Front (FLQ), to the effect that they had managed to deposit a bomb onboard. Hermes went to emergency stations with most personnel waiting on the flight deck for many hours whilst the entire ship was methodically searched. But that’s another story.