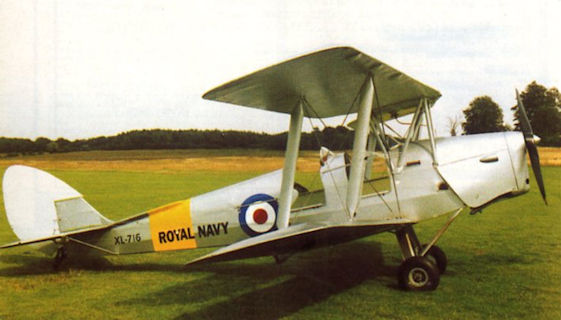 I spent two weeks there in much the same period, the autumn of 1953, learning to fly the Tiger Moth. I recall the Development flight due to an incident one morning. Waiting to take off, in front of me was a Wyvern carrying a torpedo. The Pilot revered the a/c up and must have been about to take off the brakes. But at that moment the two top fasteners holding the engine parted. The engine hinged tidily on the two lower fasteners and landed nose down on the grass. No flames. What followed was like the keystone cops.

The Pilot (RAF) abandoned the aircraft hastily, Cdr (Air), or whoever held that post, rode to the scene across the grass on a bicycle and was soon followed by the Gosport fire brigade ringing their bell.

Earlier in the year whilst doing S/Lts Courses my lot were embarked in the Navigation training ship off the Gilkicker. The later Captain Tug Wilson hovered in a Dragonfly abreast the funnel/seaboat where we were waiting turns on the bridge. The tail rotor failed and the a/c rotated instead, whilst descending into the Solent. The OOW piped, correctly, away lifeboats crew, us SubLts beat the ship’s company manning seaboat and davits.

Twelve years later Tug Wilson was our Cdr (Air) in ALBION during Confrontation and flew me into Sarawak (and safely Back again!)