Eugene Kingsmill Esmonde was born on 1 March 1909 in Yorkshire and was commissioned into the Royal Air Force as a Pilot Officer on 28 Dec 1928.  He became a flying instructor in 1932 and then left the Service in 1934, whereupon he joined both the Reserve and Imperial Airways, where he trained as a flying boat pilot. In January 1939 he received a letter from the Admiralty offering him a commission in the newly formed Royal Naval Air Branch.  He asked to be released from the Reserve and reported to RNAS Lee-on-Solent for refresher training and was appointed to 754 Naval Air Squadron (NAS). 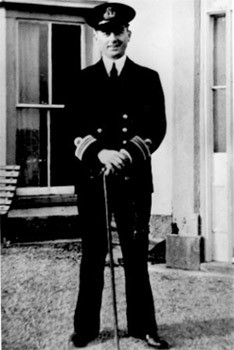 In May 1940 he took command of 825 NAS on board HMS FURIOUS.  Esmonde led attacks on Trondheim and Tromso, before receiving orders to embark on board HMS VICTORIOUS. She was destined for the Mediterranean but, following the sinking of the battleship HMS HOOD, was diverted to help the search for the German battleship BISMARCK.  Esmonde led his Squadron in an attack against BISMARCK on the night of 24 May 1941, after which he was awarded the DSO.  His Squadron was then transferred to HMS ARK ROYAL, where he operated until she was torpedoed in November 1941.  He was one of the last to leave the ship before she sank.

In late 1941/early 1942 British Naval Intelligence had received reports that the German Battle Cruisers SCHARNHORST and GNEISENAU, and the Cruiser PRINZ EUGEN, were planning to attempt a high speed transit up the heavily defended English Channel from Brest to Hamburg.  This presented the Home Fleet with a good opportunity to attack these very dangerous ships, and a large number of aircraft and vessels were amassed in ports and aerodromes along the south coast in late 1941. The six Swordfish of 825 NAS were among the units assigned to Operation Fuller.

Probably through good intelligence of their own, the German Navy waited before attempting what would become known as the Channel Dash, and gradually the British assets grouped along the English coast were re-tasked to higher priority requirements. By February 1942 the only remnants of this defensive fleet were the six Swordfish of 825 NAS based at Manston in Kent, armed with one torpedo each. The German Navy took their opportunity.

On the morning of 12 Feb 1942, Lieutenant-Commander Esmonde, in command of 825 NAS of the Fleet Air Arm, was told that SCHARNHORST, GNEISENAU and PRINZ EUGEN, strongly escorted by some thirty surface craft and fighter cover, were entering the Straits of Dover, and that his Squadron must attack before they reached the sand-banks North East of Calais.  This was the day after Esmonde had been awarded the DSO at Buckingham Palace from the King for the BISMARCK action.

Esmonde knew well that his enterprise was desperate. Soon after noon he and his Squadron of six Swordfish set course for the Enemy, and after ten minutes’ flight were attacked by a strong force of enemy fighters. They had been briefed to rendezvous with three RAF Fighter squadrons, but due to a variety of circumstances, only ten Spitfires arrived.  Contact was soon lost with his fighter escort and in the action which followed all his aircraft were damaged.  He flew on, cool and resolute, serenely challenging hopeless odds, to encounter the deadly fire of the Battle-Cruisers and their Escort, which shattered the port wing of his aircraft.  Undeterred, he led his Squadron on, straight through this inferno of fire, in steady flight towards their target. Almost at once he was shot down, but his Squadron went on to launch a gallant attack, in which at least one torpedo is believed to have struck the German Battle-Cruisers.  All six Swordfish were lost and only five of the eighteen crewmen survived. Esmonde was posthumously awarded the Victoria Cross.