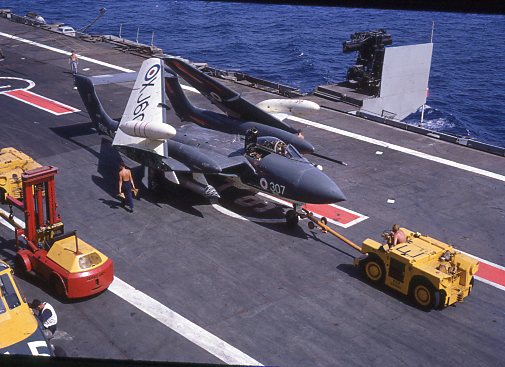 The year is 1967 and HMS Hermes is carryout out “work ups” in the Mediterranean Sea following a long and extensive, three-year, dockyard refit. It’s a lovely, sunny, warm day and the ship has just gone to “flying stations”. The first fixed wing aircraft have started their engines and the ship is turning into wind ready for the first launch of the day. Any carrier flight deck, when the ship is at flying stations, is a very busy, congested place to be. Communication is difficult, noise levels are very high, and the ship is tanking along at 28 knots (about 32 m.p.h.) Sometimes things can and do go wrong.

The first aircraft is fast approaching the starboard catapult when its progress is blocked by a mis-placed “forklift truck”. It is used by flight deck fire crews to assist in the rescue of aircrew in the event of a “crash on deck”. The deputy Flight Deck Officer (FDO) quickly spots the problem, takes the initiative and with one mighty bound jumps up into the driver’s seat of the errant forklift truck. He starts the engine, presses the accelerator and nothing happens.

More throttle is applied, still nothing, no movement at all. Unknown to the FDO and standard practice on board, chocks are in place behind the rear wheels. Now with the throttle on the floor the forklift truck eventually responds jumping the chocks and moving rearwards at great speed. The guard rail is far too flimsy to stop a charging, two-ton, forklift truck with passenger from going over the ship’s side into the sea, some sixty feet below.

The fork lift truck is lost for ever but fortunately its driver survives and floats to the surface. With the ship already at flying stations the SAR Helicopter moves into position to perform a rescue. Once the 28,000-ton carrier has steamed past the very shocked FDO, he is winched to safety. With typical “jack humour” a small silhouette of a forklift truck quickly appears on the cabin door of the helicopter denoting another successful rescue. 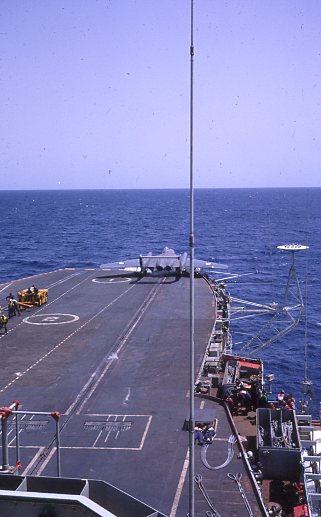