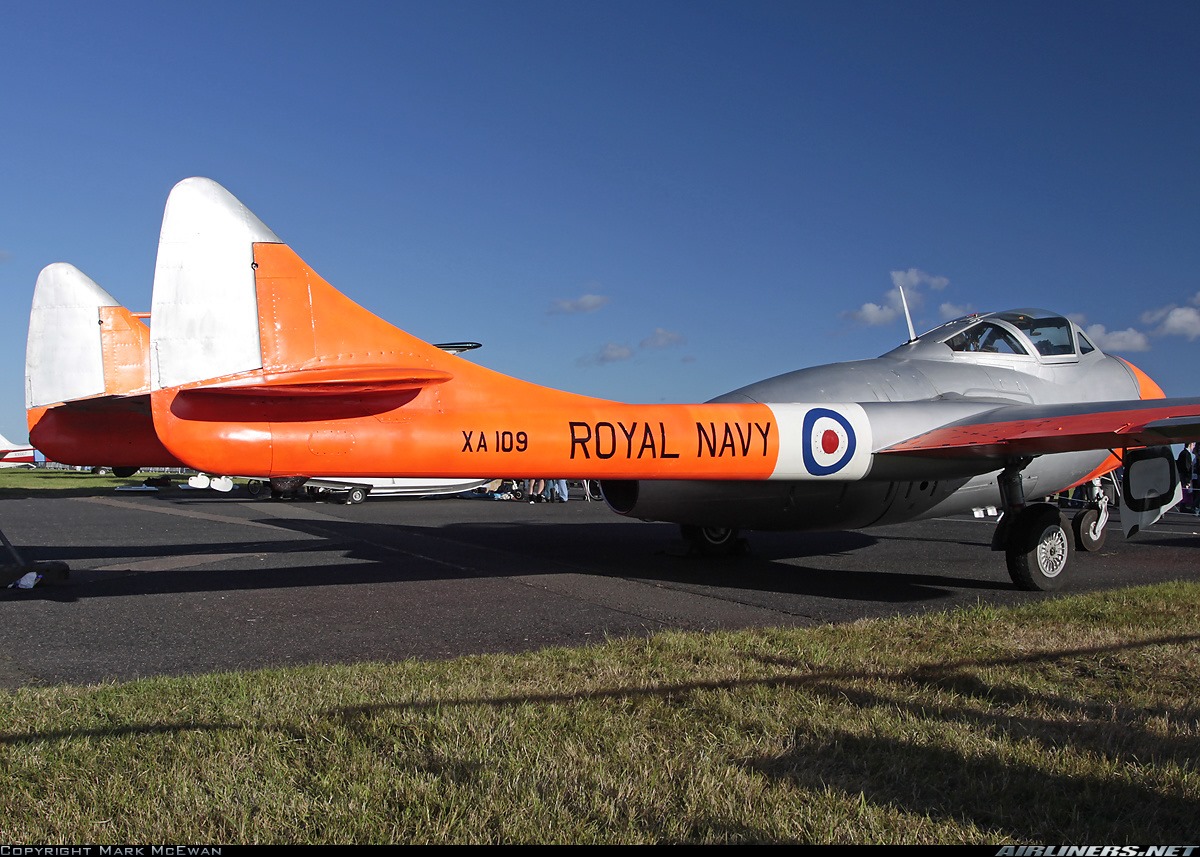 If your surname begins with `A`, as mine does, I have often found that choosing the name at the head of a list, is the simple choice for anyone with `task` to award.

And so it was that in late 1954 at RNAS Lossiemouth, I was lounging in the Students Crewroom awaiting the morning list of `Flights` or `Classroom` for my group of aspiring Fighter pilots.

We had started flying the De Havilland Vampire T 22 in July, having been awarded our `Wings` at Royal Air Force Syerston in June. After the Harvard, enjoyable as it was, the Vampire had been a pleasure to fly, apart from an impressive thirst that meant fuel gauges needed vigilance, and a stubby little three wheel undercarriage that made one feel that your Rear-end was uncomfortably close to the Tarmac, if you landed `wheels up`.

The Senior Instructor appeared, called my name and that of another, Pupil B.

“Get your kit on, the Captain has arrived and wants to do a bit of formation flying, you’ll be his ‘Wingmen’”. ‘Involuntary volunteering’, it could be called; and it is surprisingly common in the Services.

Now, I knew he was a war hero and had flown at `Taranto` and had even possibly got his `wings ‘in a Sopwith Camel, but a demi-God, like Royal Naval Air Station Captains very rarely get the chance to regularly practice their art, and are understandably, somewhat ‘rusty’.

I kitted up with my colleague B and we joined our Captain as he silently walked out to our waiting Vampires. We taxied out and took off, forming up as a ‘V’ Formation – a pupil on either wing of the Captain. He looked steadily ahead and maintained radio silence.

Formation flying requires those in the formation to keep silent and a close contact with their leader, whose duty of safety is to keep a good vision of the surrounding airspace. It helps as well, if a hand signal or brief radio instruction is given to his formation, before any manoeuvre.

As the formation is concentrating almost solely on him in the effort of maintaining their position on him, they soon have very little idea as to where they are geographically. Whilst in close formation, only the Leader has radio contact with with Base to check the location. As we twisted and turned, I noted that the Captain was apparently talking to somebody, BUT not to US. We were by now well above the almost complete cloud cover; there was no sign of Scotland. Suddenly, our leader began a descent, towards the clouds far below, and we entered, with B and I, firmly holding position on to his wingtips.

I only hoped that he knew what he was doing, but also hoped that the Captain felt as uneasy with what was happening, as the ‘Chicken’ grimly juggling to stay in formation on his port wing. At about 1000 feet we broke out of the cloud, into a very gloomy, misty landscape, somewhere in Scotland, but nowhere near Lossiemouth. We were flying up a narrow valley, with ominous black mountains rising into the low cloud on either side!

Luckily for us, the Captain could also see, through the murk, that the valley ended with a similar mountain in front of us.
He pulled back hard on his control column to climb, and so, of course, did we! In a minute or so, that seemed much, much longer, we were once again in the most welcome sunshine. We made an uneventful return to Lossiemouth and landed. As B and I walked away from our aircraft, our Captain was already entering his car, attended by our CO.

I realised that WE had not once exchanged a single word with our Captain. The black Mountains, – The Cairngorms. The incident, as far as I know, never previously recorded’.