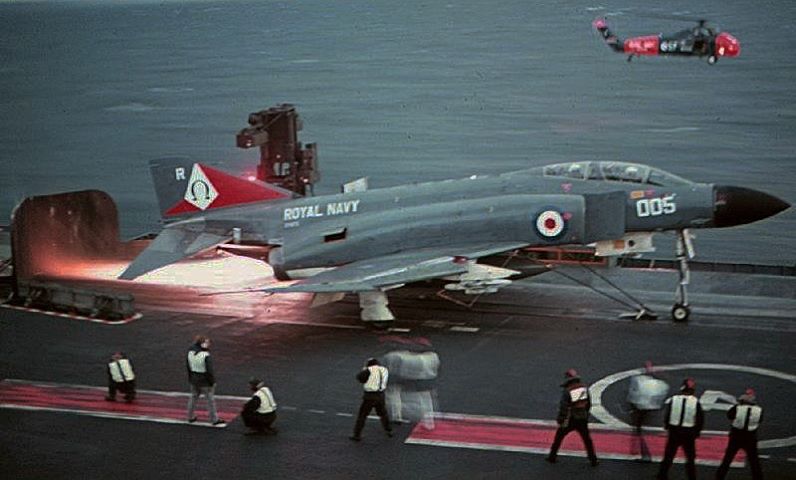 “Night operations from a carrier are conducted at a more deliberate tempo than in daylight and there is an atmosphere of increased tension. The flight deck is lit by red floodlights set high up on the island. It is a very different scene at night, gloomy and rather mysterious. The dayglo centre line and the coloured surcoats of deck personnel fade into greyish tints. Aircraft parked away from the lights appear as large shapes in the shadows.

Aircrew walk down the flight deck carrying helmets under their arms and disappear into darkness. There is little wind over the deck as the ship steams downwind before turning to launch aircraft. ‘Stand clear of intakes, jet pipes and propellers, Start the jets.’ A vibration can be felt through the deck announcing that the ship is increasing speed and starting to turn. Wands light up briefly held by barely visible marshallers, circle and then shut off; the signal to start engines.

Dim navigation and fuselage lights come on indicating that engines are running. A pair of wands suddenly click on in the gloom beckoning the first aircraft from the range. It waddles forward; it’s under belly light reflecting from the deck. The wands point forward and immediately another set come on directing the pilot towards the bow. The lights move in a wide fan and the navigation lights follow as its wings are spread. A marshaller standing astride the catapult track with wands upright gives small signals to ensure that the nose wheel is aligned correctly. Dim figures appear and crawl under the aircraft’s belly and then scamper clear. The lights point towards the centre of the deck and suddenly snap off. A new set come on.

The flight deck officer, leaning against the wind, carefully raises his wands high and with concentrated care rotates them slowly. This is the signal for the pilot to go to full power. The jet pipes which were merely faint glowing circles now grow TWO long incandescent spears of flame reaching out behind the Phantom. They beat against the Jet Blast Deflector and the deck immediately behind the aircraft begins to glow with intense heat. Its navigation lights come on bright, the signal ready for launch. A sense of raw power only just held in check continues for a few brief seconds.

The controlling wands descend to the deck in exaggerated slow motion so as to make clear they were not dropped accidentally. A couple of seconds later the catapult fires hurling the Phantom forward, its fiery tail sweeping along the deck. The aircraft disappears immediately into darkness leaving only twin glowing circles and navigation lights which soar upwards. The flames are suddenly extinguished as its afterburners cut out. The next Phantom moves forward on to the catapult.

When the time for recovery comes aircraft are first brought back under radar direction to position 20 miles astern and then individually guided towards the ship under the control of CCA (Carrier controlled approach) radar. Carrier aircraft in the past flew the same visual circuit at night round the ship as in daytime, low over the surface. This was dangerous for it was only too easy for a pilot to become disorientated and fly into the water.

The standard practice now brought aircraft back for a straight in approach from several miles astern making it easier for the crew to line up with the deck. Sometimes the carrier went looking for those few extra puffs of natural wind which could make all the difference between marginal entry speed into the arrestor gear and the luxury of having a little more in hand. Then the localiser beam stretching astern would swing as the ship altered course giving the controllers an increasing problem. The Wessex plane guard helicopter was sometimes sent ahead to drop a smoke float as a better indicator of wind direction.

The operation of bringing aircraft safely back to the deck at night is much more demanding both for aircrew and ship’s staff than arriving on a static runway ashore.
In a dimly lit Flyco (Flying control position) the quiet voice of the Direction Officer comes over the speaker assembling the returning aircraft in the marshalling area. The deck is reported ready, arrestor wires tensioned and the heavily clad figures of the fire crew put on their space helmets Two separate radio frequencies are used to talk to alternative aircraft as they are individually directed from the stack to final approach. The planned interval between aircraft landing at night is extended to one and a half minutes from forty seconds which is the daytime target.

The radio in Flyco is now switched to the CCA frequency so that the progress of the first aircraft can be monitored. The reassuring voice of the controller comes over the speaker. ‘006 you are on the centreline and approaching the glide path, stand by begin your descent – the deck is ready for you. Commence your descent now – you are drifting slightly right of centre line – come left 3 degrees – I see you correcting back nicely.’ This one sided conversation continues as the controller tries to anticipate any deviation from the flight path so helping the crew to establish a stable approach. ‘You are now at one and a half miles – look up for sight.

The LSO (Landing Signal Officer) standing on an exposed platform on the port side of the Flight deck looking through the landing sight telescope now takes up the patter, saying little if the approach is going well. He can judge from experience how things are going and even at night can gain a very precise idea of speed from the attitude of the aircraft. ‘Your approach looks good, now going a little low on the glide path – add a little more power.’ Sometimes it is ‘power, POWER POWER!’ At the last moment he may call ‘Hold that attitude.’ Any attempt at a late flare in a Phantom is made at peril because this will immediately set up a high rate of sink and likely result in an arrival on the quarterdeck rather than the flight deck!

In Flyco all eyes are trained aft to catch sight of the approaching lights. When first dimly seen they appear stationary and nothing seems to happen for a while. Then they begin a slow descent towards the faint horizon and become a little brighter. At a very late stage perhaps only 200 yards from the deck action speeds up dramatically. The lights become an aircraft rushing towards the ship. It crosses the rounddown and a second later a burst of sparks marks the point where the arrestor hook slams on to the steel deck. The aircraft stops beneath Flyco windows, a Phantom its red tail a dusty brown in the eerie floodlights.

Sometimes an approach does not go so well. The aircraft perhaps arrives over the deck carrying too much power and misses the last wire to the shout of ‘Bolter, bolter, bolter’ from the LSO. Then it flashes through the floodlit area momentarily visible as a complete aircraft before disappearing into darkness again. Its crew must now try and regain their composure and settle down to a long circuit before doing it all again. In Flyco there is concern for its fuel state so as to anticipate future decisions. There may be a stand by Buccaneer tanker in the air to be alerted and brought back closer to the ship, or the possibility of diverting the aircraft ashore if within airfield range.

With the last aircraft safely back on board the crews gather in the Ready Room for a debrief. The strain of operating from a carrier at night is only too self-evident from their faces.”

Thank you to Steve Bond for sending us this story. Steve has written a ‘Fleet Air Arm Boy’s’ book filled with Fleet Air Arm stories like this one. You can buy Steve’s book online in the Navy Wings Flight Store