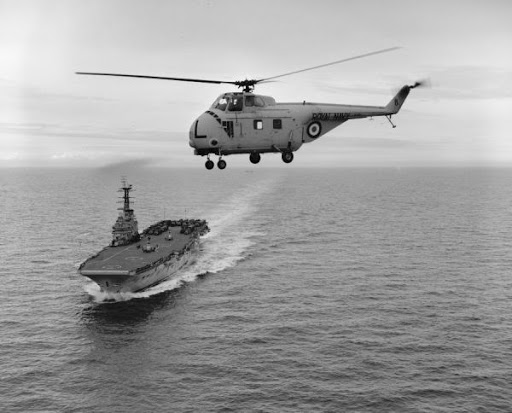 The “dit” from John Ford about Night Flying when he was Cdr Air, Ark Royal, brought to mind an experience from 1960 in H.M.S. Bulwark. Probably not very exciting compared to those more hair-raising exploits described elsewhere but quite interesting enough for this chicken heart at the time, and certainly memorable enough for me to recall that night from sixty-two years ago.

In the middle of a Far East tour with 815 Sqdn in Albion, operating Whirlwind 7s in 1960, when the ship returned from Hong Kong to Singapore in mid-July, H.M.S. Bulwark with 848 Marine Commando Sqdn embarked, also with Whirlwind 7s, was already there and due to sail at any moment. 848 were two pilots short due to injuries and it was deemed necessary to bring the squadron up to full strength “for operational reasons” with two pilots loaned from 815.  So, it came about that Bill Flynn and I were suddenly given a pier head jump across to Bulwark and found ourselves back at sea in short order.

The task for 815 was primarily A/S and Planeguard. In those days, prior to auto pilot and auto hover, we did virtually no night flying at sea. Night hovering over the sea had been tried, with the aid of a smoke flame float, in an attempt to be able to dunk the sonar, but the visual references were so poor as to make the exercise impractical. With 848 Sqdn, however, the possibility of night landings of troops on land was considered both practical and desirable once an advance party had secured a landing spot to provide guidance lights to lead the aircraft in. Bill Flynn and I were quickly indoctrinated into the Junglie routines involved with embarking and disembarking troops, and transporting underslung loads of Wombat anti-tank guns and 2CV vehicles and various other bits and pieces of military equipment. It was also deemed essential that our night flying skills be thoroughly refreshed and so we found ourselves heavily involved in practise IF sorties and thence onto the night flying programme.

On this particular night I was briefed that the weather was likely to degenerate with heavy tropical thunderstorms but we would be recalled if it looked like becoming too bad. I took off and completed one homing on to the ship and completed an approach, landing and take-off before circling around for a further homing and approach. Lightning flashes had been visible in the distance, through the impenetrable blackness, but suddenly the whole cockpit was illuminated by an intense flash of lightning, accompanied by a thunderous crash outside and a fierce crackling on the radio inside. A quick check of all the flying instruments seemed to show that everything was still working, as I lowered my seat to the bottom of its travel, concentrated intently on the instrument panel  and turned into my next circuit and approach. And then the rain started.

Within seconds the right side of my flying overalls was soaking and I quickly slammed the cockpit door closed. It seemed to make little difference as water squirted through every tiny available crack around the door. At this point my main concern was that water might get into the electrics and I might be left with no cockpit lighting and no electrical instruments. Jamming my knee under the collective I quickly found the torch clipped to my Mae West and switched it on. The prospect of a limited panel circuit just a few hundred feet above the sea was not awfully appealing, but better that than trying it in complete darkness! Nor did I believe my ear was sufficiently well tuned to maintaining correct engine and rotor RPM manually in the dark.

As lightning flashes kept occurring all around me, it was with some relief that I heard a general recall for all aircraft over the radio and set the aircraft up for a CCA approach back to the deck. It was with even greater relief that I eventually saw the deck lights appear through the downpour and the batsman’s wands signalling the required position alongside the flight deck. I slid alongside and crabbed sideways onto the deck under his guidance, touched down and shut down. Retreating to the crew room, I struggled out of my sodden flying overalls. I was charmed to be greeted by the S.P.

“Well done, good to see you made it O.K., but you’ll have to do a couple more nights to get enough night landings in to get fully night qualified.” Oh, such a joyous prospect.