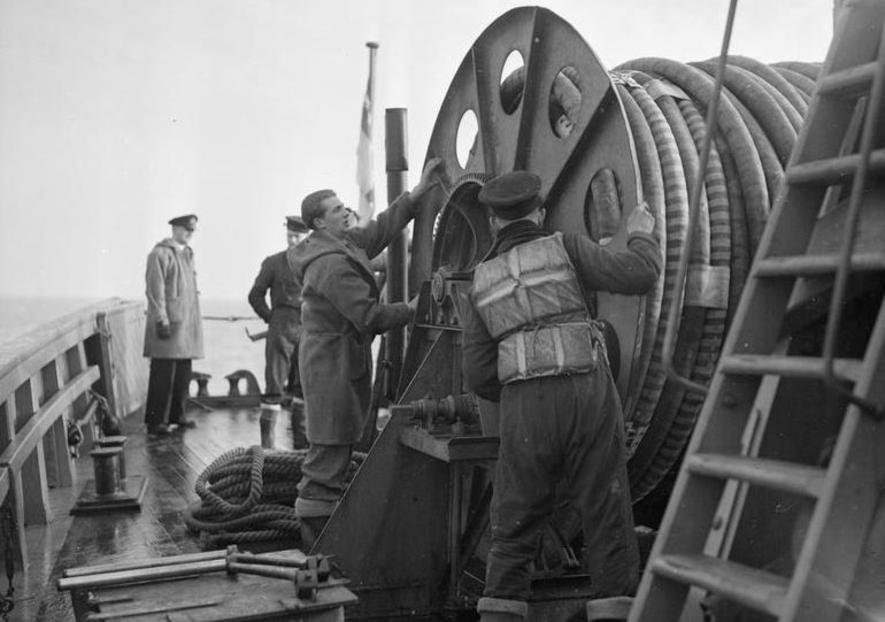 I joined her, alongside the shore establishment HMS Vernon, in 1953 as a newly `scrubbed up` Sub Lieutenant awaiting my Pilots course at RAF Syerston, due in about 6 weeks’ time. Their Lordships, in their wisdom, thought that some `sea time` could be usefully gained whilst we waited.

I had been in the Royal Navy all of 9 months so my appointment as the second officer to one of Her Majesty’s Motor Minesweepers MMS1044, was as new to me as it would be to the unsuspecting Minesweeper. Her duties at Vernon were primarily to give practical experience to the junior rates under training in the shore base; and of course, any odd events that required a smallish, shabby old vessel, made of wood and long past her sell by date.

I loved it; everyday, it seemed, was a different adventure. It was soon apparent that HMS Vernon, an immaculate teaching establishment set in equally immaculate grounds, felt very differently about the rather dilapidated Minesweepers, with their `Buccaneer` crews, moored along her waterfront.

You can, therefore, see how useful I would be with my sea time limited to a couple of boat trips off the beach Brighton and six months on the training Aircraft Carrier.

Nearly every day, we would take on a number of excited young lads and their far less excited tutors, to plod up and down the Solent streaming our anti-magnetic Mine cable and also exploding the sequenced explosive charges purported to destroy pressure and sound detonated devices. Luckily the Solent had been swept clear of these devices many years before.

This particular event was just before the Review date. Our companion Minesweeper and 1044 had been designated as Tenders to the Fleet. The Fleet were soon to anchor in all their glory in the Solent, from Portsmouth to the Southampton Roads and in a fortnight or so, then we would ferry any visiting VIP’s out to them as required.

For the immediate future, with our shipmate, we were to be the two Minesweepers leading two columns of Royal Marine Assault craft to the shingle beach at Southsea. The idea of the Operation was to simulate an assault by the Marines on a beach that was possibly mined. We were to sweep ahead of the landing craft towards the beach and swing away to port at the last moment. We took the lead of the two columns just outside Portsmouth and led them to where the Marine Officer commanding, in the landing craft behind us ordered a turn in towards the beach, all was going well.

As we approached the shingle we became aware that news of the exercise had been released to the Public and that a sizable and unsupervised crowd in `holiday` mood was now gathering on the beach waiting for the show. It was at this point that things started to go wrong. A rating called “ship astern signalling by lamp, Sir”. I alerted the Captain who was on the Bridge and had no view astern. He came aft and joined me.

“How’s your Morse, `Sub`. The b—–y Signaller missed the boat this morning and I can’t read it”.

I would be the last person to confess an expertise in the Morse code but it had been a pre- flight subject and in the end, between us we got the Message, me calling out the letters and him writing them down, —- “For God’s sake hurry up”. With an irritated snort, the Captain returned to the Bridge, where the Cox’n was at the wheel diligently, but blindly maintaining the last course and speed ordered by his Captain, towards the shingle.

His forward view was restricted by the high fo’castle, so he was unable to see that the beach ahead was now so perilously close that our spectators were becoming increasingly nervous. Indeed some were already frantically collecting towels, children, chairs, picnics etc. and scampering back up the shingle to a safer vantage point.

He probably heard our Captains strangled plea to the Almighty as he screamed “Hard astern”. Obviously our very small ship now loomed very large as the bow ground, grinding over the shingle as she came to a halt and gently sagged to one side. The other Sweeper passed astern the Captain suggesting that they would walk out to take `tea` with us later. The Marines leapt ashore from their Assault Craft, laughing up at us as they passed.

A Paddle Wheeled Tug from Portsmouth pulled us off the beach later in the day, and we returned to an irate Vernon, where two thunderous looking Officers came on board, locked our tiny Wardroom Bar and left, muttering darkly about `Enquiry` and `Courts Martial`.

My Captain was surprisingly nonchalant about it all and told me not to worry about it – so I didn’t. I later discovered that the whole exercise was aptly called ` Operation Runaground.`