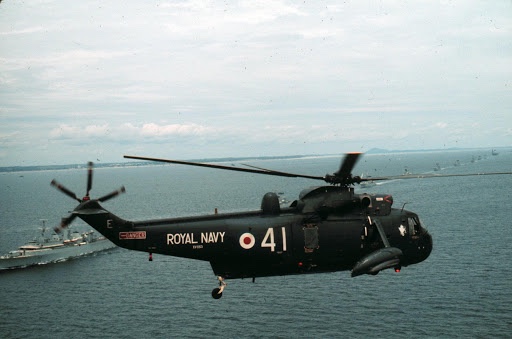 ‘I found my Observer’s Logbook the other day and thought I might share some of my experiences in my First Operational Squadron, 824 Sea Kings 1970 – 72.

In November 1970 we were embarked in HMS Ark Royal in the Mediterranean and about to commence Exercise Limejug. I was with several others down in the PO’s Mess downing a pint when the ship turned into wind for flying and there was an almighty crash and judder. A Russian Kotlin had failed to keep clear of a carrier operating fixed wing aircraft even after repeated warnings by Captain Ray Lygo and we had hit the ship in the stern and turned it 50 degrees over. All hell broke loose.

The Kotlin came up in perfect English on Tac Pri and asked for immediate assistance as several sailors has been swept overboard. All available helicopters were launched and we searched through the night and the next morning. The next morning we saw a sizeable Russian Fleet on the horizon and they did not look friendly.

One Russian sailor was found by the seaboat and insisted on swimming back to his own ship escorted by us. A second sailor was retrieved from the sea and brought onboard to the sickbay where he was medically examined and interviewed by our Russian interpreter onboard. He was given a brand new set of pussers’ clothes and taken back to the Kotlin. At the top of the gangway he was stripped and all the pussers’ gear thrown over the side. Sadly some sailors were never found.

On a lighter note, we were operating from HMS Ark Royal in the Moray Firth and doing a publicity stunt for the Navy. We went into Lossiemouth and recovered as an underslung load some brand new Minis for a photo shoot onboard. My Mini got into an uncontrollable spin and the aircraft became difficult to fly so we had to jettison it into the sea. It broke my heart to see a brand new car sink to the bottom of the Firth.

Finally on 21 September 1971 we achieved something which has not been repeated as far as I know in the Royal Navy. We were flying a Mk1 Sea King and carrying out a torpedo dropping exercise with a submarine. We were in a hover with the 195 sonar lowered and in contact with the submarine. Mike Burnett (sadly no longer with us) was first pilot and we lost an engine. Mike, being unable to maintain a hover, settled the aircraft on the sea and maintained us upright. We then set about jettisoning as much weight as we could. First I launched both torpedoes which got the immediate response from the submarine “Roger your Mayday diving deep detected two fish incoming”, secondly I lowered the 195 to the full extent and cut the cable, thirdly all safety gear in the back was thrown overboard. I resisted Mike’s suggestion that the aircrewman and I should jump for it. The sea was quite choppy, very cold and the rotor blades were swinging very close to the surface as we bounced on the surface. Finally I think I was captain of the aircraft and felt it inappropriate to abandon ship before the rest of the crew.

Fortunately Mike saved the day by motoring forwards very slowly with spray crashing all over the cockpit windows, to about 20 knots or so. We unstuck, and he held it at a few feet above the surface, building up flying speed till about 70 knots. We were able to climb away and return to Ark Royal. Mike did a marvellous job that day which was never fully appreciated by the powers to be. To the best of my knowledge it was the only recorded single engine takeoff from the sea by a Sea King in the Royal Navy. The Canadian Navy designed their Sea Kings so that this was possible. Future versions of Sea Kings had more powerful engines and could hold a single engine hover.

All I got when we recovered back onboard was rocks from the AEO for ditching the best sonar set the squadron had and I didn’t get any Christmas cards from the submariners either! The aircraft was re-engined, new sonar fitted, washed down and flying the next day’.

Picture of a MK1 Sea King by John Eacott