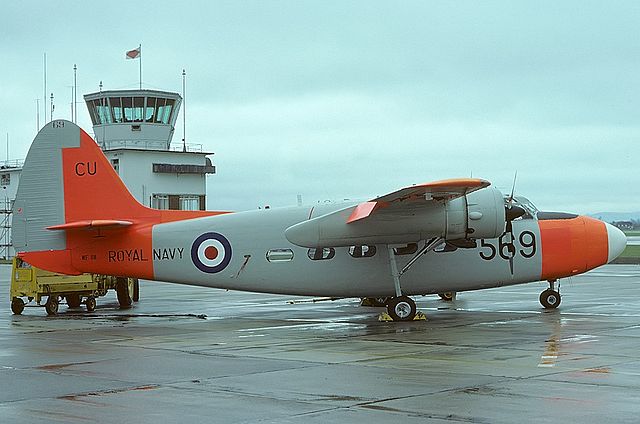 ‘In the early 1960’s Royal Naval Squadron pilots were a close knit band of young men, and nearly all bachelors.However one of their number was breaking ranks with his wedding shortly to take place at a small village in Hertfordshire. A return journey by car from their base at Lossiemouth to Hertfordshire, in the days before motorways, was not one to undertake over a weekend if you wanted to be fit to fly on Monday. Close friends in the Squadron were keen to support the prospective bridegroom so thoughts turned to the alternative possibility of air transport; after all they were airmen.

The station kept a twin engine Sea Prince aircraft for communication duties, capable of carrying some 5 or 6 passengers. It was normally flown by an ancient aviator who had been a sprog pilot at the time of the Swordfish attack on the Italian fleet at Taranto. The aircraft could not be made available until Saturday morning due to other commitments. The ancient aviator adamantly refused to fly this task over the weekend. The airfield and its facilities were normally closed at weekends but special dispensation could be sought for a Saturday take off given no support other than the duty fire crew.

So how was this problem to be overcome?

All the squadron pilots were jet qualified flying Scimitars but one had also gained some limited twin piston engine experience several years earlier. This particular Sea Prince did not have dual controls, and only very basic navigation equipment consisting of one VHF radio, and a radio compass, which the pilot in question had never learnt to use.

Pilot re-familiarisation on this aircraft, when required, were conducted by the ancient aviator handing over a copy of the pilot’s notes, followed by a quick demonstration circuit before he went to lunch. The aspiring twin engine pilot was then left to try it out for himself. In those days asymmetric flying and single engine landings were practised by actually shutting down one engine. A single engine approach with flaps down became a committed landing; you had better get it right the first time. Under pressure from his mates the seriously inexperienced pilot was persuaded to volunteer for the job, and submitted to the rigors of the refam programme. The actual flight time available for this was strictly limited.

Come the wedding day the happy band of brothers, wearing best uniforms, medals and carrying swords, bundled into the aircraft. The intended destination was Bovingdon, an American airfield in Hertfordshire, which operated B17 bombers during the war, but was now a Military Air Transport base. No internet weather briefing was of course available in those days and being Saturday the Met office was closed.
Oh well! a Sea Prince had plenty of fuel and the weather looked pretty good at Lossiemouth. First there was the long climb out over the Cairngorms, in perfect winter weather, where ice would often start to build and gravity call the tune.
But not today.Over the Borders and droning on South a change was taking place, overhead a hemisphere of limitless blue but far below lay an unbroken layer of cloud stretching to the hazy horizon.

The passengers in the back were asleep by now wrapped in a cocoon woven by the deadening roar of the twin Leonides engines. In the cockpit the only conversation an occasion exchange with Border military radar suggesting a minor change of course.There was no hint of doubt at this stage, a long way still to go to Bovingdon and surely the cloud sheet would soon start to break up? In any case there was fuel enough to divert to one of the Master Airfields with no expected problem provided the VHF radio did not pack up.

The cockpit was warm in the sun, the fuel gauges slowly unwound and the scene remaining exactly the same, a flat cloud sea unbroken as far as the eye could see.

On enquiry Border replied that it had no weather information for airfields beyond its immediate area, but the local ones were reporting sky obscured and very limited visibility.
The thought of a 180 degree turn back was never really an option, this was the “Can Do” Navy and anyway the wedding would then be short of its promised guard of honour.

Border gave a final position in relation to some feature which could not be found on the map and suggested calling Bovingdon. It took a long time for Bovingdon to respond and there was surprise at the request for a let down and landing from some unknown limey aircraft. The operator added that no other aircraft had been able to land that day and the field was considered closed due to weather.

Hum, the plan was not exactly working out. Bovingdon thoughtfully followed this up by saying that all airfields in the South of England were experiencing the same conditions.

Suddenly the state of the fuel gauges did not look quite so happy. The American voice, now slightly apologetic for an apparent lack of hospitality, suggested trying some other country, in the belief that, like most US transport aircraft, this funny Sea Prince presumably had a
transatlantic capability. A rather more positive radio transmission assured kind sir that the Sea Prince did not have the ability to divert anywhere beyond the nearer Home Counties even in a terminal glide, so what could he do about it? The reaction was encouraging, if the Sea Prince would not mind waiting a bit the GCA crew would be closed up, and a controlled descent to minimum’s then available. The question of what minimum, and where the aircraft should go if forced to overshoot, was not explored. By this time the rather languid squadron pilot sitting in the front cockpit seat had woken up and started to take some notice.Soon the voice of the GCA operator came on the circuit and the reassuring litany began, giving headings to fly and clearing a descent to lower levels. It crossed the unofficial copilot’s mind to wonder whether his brother aviator had ever flown a GCA in the Sea Prince before, but thought better of asking. He had some of the Right Stuff and was not going to show any emotion which might question his sang froid.The cloud layer crept nearer as the aircraft turned inbound. All was now set for landing, gear and flaps down, and the pilot had even remembered to advance the pitch levers causing those in the back to wake up and look around. There was little more they could do in the event of an “unscheduled landing” except stow their swords more securely.

In slow descent the undercarriage first touched the cloud tops at 900 feet and then the whole aircraft sank into the mist. The copilot was ordered to look ahead and report anything seen, rather like seaman lookouts at the Battle of Jutland. GCA called passing 500 feet, then 400 with no break in the gloom. At 300 feet the situation was unchanged, on the glide path but still nothing in sight. Some fleeting memory of a 250 feet minimum height passed through the pilot’s mind but it also occurred to him there was good precedent for overlooking orders, for had not Nelson himself done just that. Turning a blind eye here was perhaps not quite the perfect analogy! Somewhere about the 150 foot level an extremely controlled voice from the right hand seat reported he could see cows ahead. Well cows had to be standing on Mother Earth, and almost immediately lights and a wide expanse of black tarmac appeared close ahead. During the ensuing landing the Sea Prince, with its long springy undercarriage, leapt back into the air, before finally settling on the runway. As any aviator knows when an aircraft is returned to earth the result can be judged as a landing or an arrival. No independent judgment was needed to classify which this was!

The wedding did get its guard of honour.

“They say in the Air Force the landing OK,
If the pilot gets out and can still walk away,
But in the Fleet Air Arm the prospects are dim,
If the landing’s poor and the pilot can’t swim”