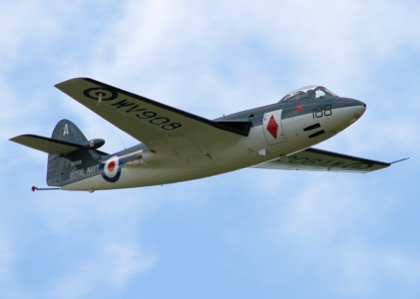 ‘A lucky fellow Seahawk student who drew the prize of an away weekend in a Seahawk took off on a Friday afternoon in the Spring of 1956, to see his girlfriend in Yorkshire. He flew into an RAF base, (I think Linton-On-Ouse), but having arrived safely and impressed the Crabs by folding as he taxied in, he found after shutting down that he couldn’t get the canopy to open.

There was much shouted conversation through the perspex and eventually a phone conversation between engineering Linton and 738 Sq at Lossie.

Whatever the problem, it couldn’t be solved, and after refuelling, our lucky student was sent back for a night landing at Lossie!’