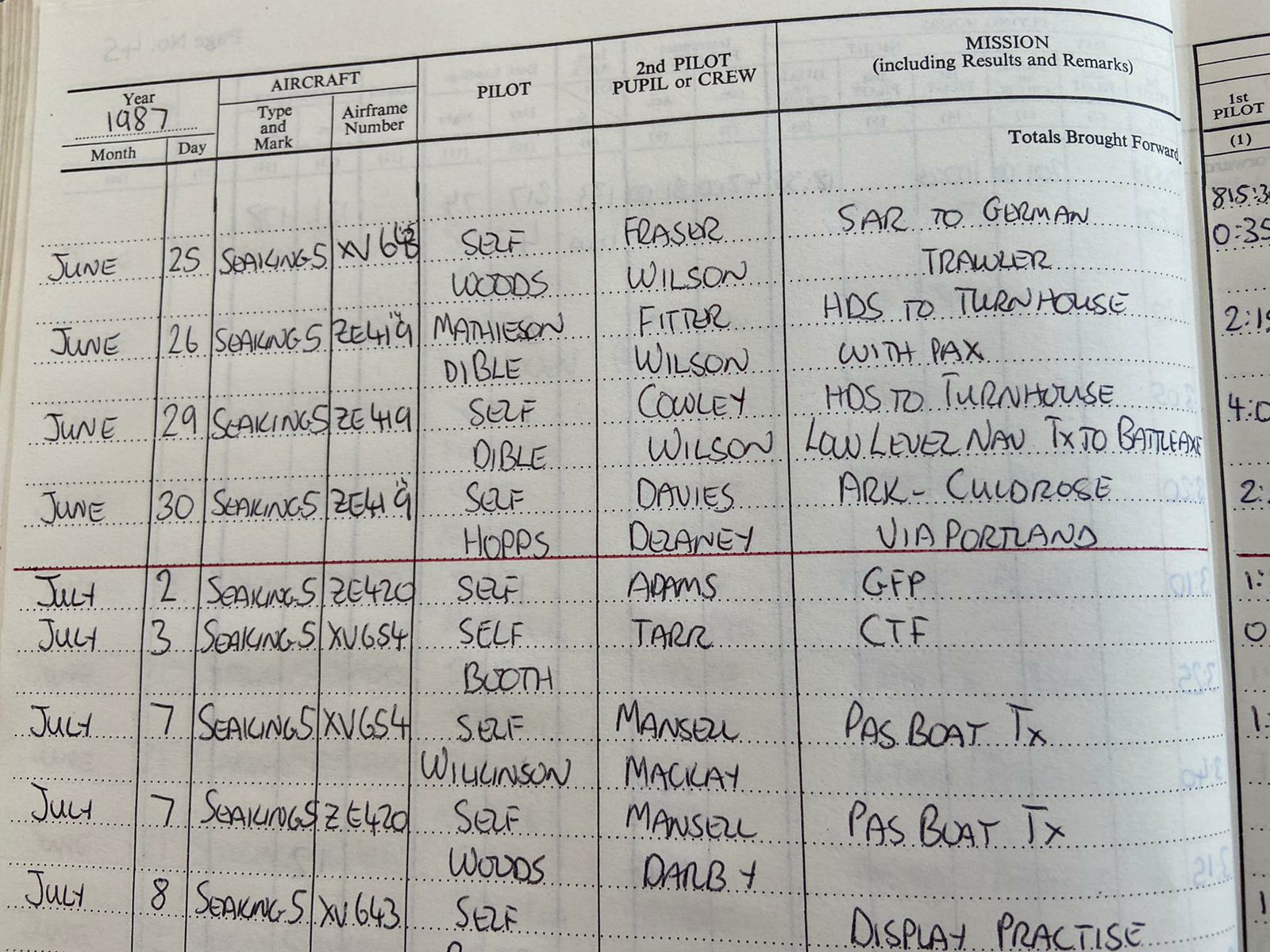 I was a pilot on 820 NAS and HMS Our Croil back in 1987. Despite the Squadron and ship hierarchy which, seemed hell bent on making life miserable for the young aircrew, we contrived to have rather a good time of it. To sharpen our ASW skills we were sent on a JMC.

The weather off Scotland in June was predictably hideous, it is as if the weather Gods look at the JMC calendar and say right ho chaps lets screw this one up again. The majority of our time was taken up swilling beer and sleeping interspersed with taking the mick out of the ship’s damage control officer a rather serious gentlemen who was given the affectionate name Gearbox as he whined about aviators a lot. I digress. So the JMC finished, the free world was once more safe and a promising run ashore in Newcastle beckoned.

The weather had improved somewhat as we transited round the North East tip of Scotland picking our way through a bunch of small islands. I was the standby SAR crew aircraft captain one particular afternoon. Was never sure why we needed 2 crews probably just the ships way of keeping us out of the bar. Matt Jennings (if memory serves) was the primary crew Captain. All of a sudden over the ships Tannoy booms “Launch the SAR”. On such occasions both crews muster in the briefing room, get a very quick brief then man up the aircraft and take the rest of the info on deck via telebrief (like a telephone connection for helicopters). One of the slightly better things about our Squadron was that the seniors actually let the SAR crew go and do it.

Too many times over the years on various Squadrons one would arrive out of breath in the briefing room to be met by the SP or CO who would declare “I will take this one” forever hunting for an AFC (a medal) i guess. We were told that a German trawler had hit a rock and was sinking 60 miles away and we needed to help out. We legged it out on deck to our trusty steeds or rather the only 2 out of 9 aircraft that actually stood a chance of leaving the deck, the rest usually languished in the hangar in various states of disrepair. Our aircraft for the spotters was XV643 one of the original Mk1 700S NAS aircraft. As I recall it had had a tough life and looked like I do now shabbily worn out. Matt launched and headed off i was told to hold on deck (thoughts of tea and medals later on rapidly evaporating).

Matt arrived and lowered his crewman only to be told that the engine room was flooding and could we bring a pump. On telebrief i was informed that a party of stokers with a Rover gas turbine pump was on its way. I glanced up at flyco as contradicting orders were bellowed first from Wings then countermanded by Airops. I could barely see into Flyco as the mass of accumulated gold rank tabs shone brightly, illuminating most of the forward superstructure. Eventually our stokers arrived on deck blinking owl like from the confines of the engine room. With them came an array of pumps, tools and hoses. A few more bellowed orders from various departments connected to telebrief were issued and countermanded, I had never been so glad to disconnect from a ship in my life and we were ready for the fray. Now, the Mk5 Seaking was a heavy beast at the best of times we had quite a bit of fuel and did not have time to defuel. With a bunch of not exactly small stokers onboard we must have been well overweight. Still the enticement of a medal called like an alcoholic tucking into his first vodka prior to breakfast. We staggered into the air rounded the bow and thumped and lurched our way to the now visible trawler. A brief look back revealed Ark scything along through the water at max speed with the biggest rooster tail of wake i have ever seen. I think the old girl sensed a disaster and wanted to get in on the action.

We arrived while Matt circled so we could drop our stokers. It was apparent that the trawler (a German vessel) was settling by the stern rather quickly. Without a thought for weight/power margin/centre of gravity (C of G) we arrived with a flourish at the bow only to be greeted by torques matched at 111% which was max power on the old girl. It took a while for Moose Fraser and Tug Wilson in the back to unload the stokers and gear. During the process i noticed that the cyclic was virtually touching the instrument panel and Mike Woods in the left hand seat trimmed the flight control system as far as he could to try and keep it ‘in authority’. About every 2 to 3 seconds there would be a thump through the airframe and the cyclic would move abruptly in a small circle. This, i was informed afterwards, was because the C of G was so far aft the rotor head drop stops came into contact with another probably quite important part of the rotor head. Things improved dramatically when the last of the cargo was dispatched.

The SAR progressed, the Chief Stoker stuck his head into the engine room to be greeted by a wall of water that 30 Rover gas turbine pumps would not tackle. That said the lads gave it a go and decided, quite rightly, after a few minutes of this madness to abandon he engine room the pump and the ship. They put on an impressive turn of speed as they ran up the now sharply angled deck to the bow where we could lift them off again. By this time we had burnt off some fuel and managed to sort out the C of G a bit. We picked up the last one as the stern went under water. Matt approached again to the ship to lift off his crewman and the Captain who had refused to leave. His wife had also been on board but had thankfully left earlier. Turns out the Captain was under the influence, had hit a rock while drunk and had tried to destroy the ships log. The bridge went under water just as the crewman finally wrestled the skipper into the double lift, the ship literally sank from under them. There are some cracking pictures of the event but try as I might I can’t find them aside from the logbook entry. The whole trip took only 35 minutes but seemed to last a long time.

We returned to Ark and gathered in the ACRB (aircrew café) for a debrief. In essence we had launched, probably overweight with a massive out of limits aft C of G. The whole plan with the stokers had been a mistake from the start and it could have ended with a very different outcome. I was quite surprised at myself on the C of G side of things as i was generally pretty meticulous about calculating it but this time the whiff of a medal had obviously had a greater calling. As they say ‘i learned about flying from that’ and was far less gung-ho in the future. As for the trawler, the captain was charged and i believe spent some time in a Scottish jail.

I have just read Kev Mathieson’s dit on Search and Rescue and was quite surprised to find that I was mentioned! You will see the other members of my crew: co-pilot James Dible, observer Ian Fitter and aircrewman LACMN Byrne, in the attached scan of my log book. As I recall, it all happened very quickly and I have little to add to Kev’s account, except that I attach a photograph of the vessel, the 998 ton F/V Hessen, shortly before she sank, with our two Sea Kings hovering over her. You can see one person running (as fast as possible!) towards the bow as another is about to be winched up. It all happened very fast from then on, we picked up the last survivor just as the bow disappeared below the waves, probably within a minute of this photo being taken. 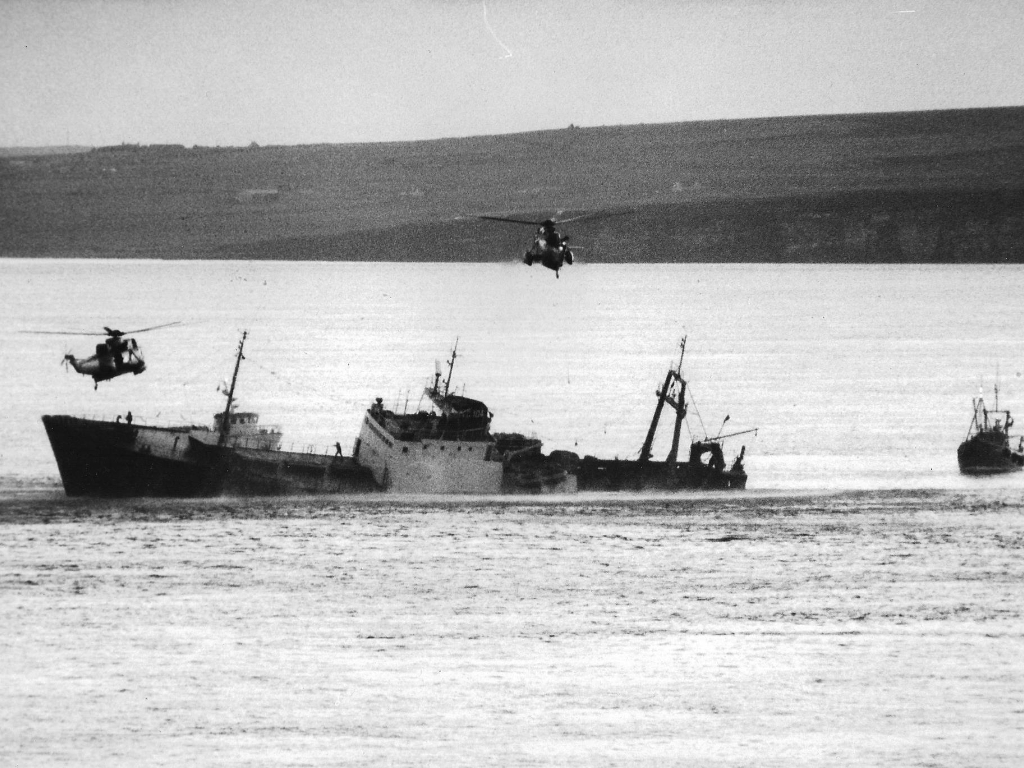 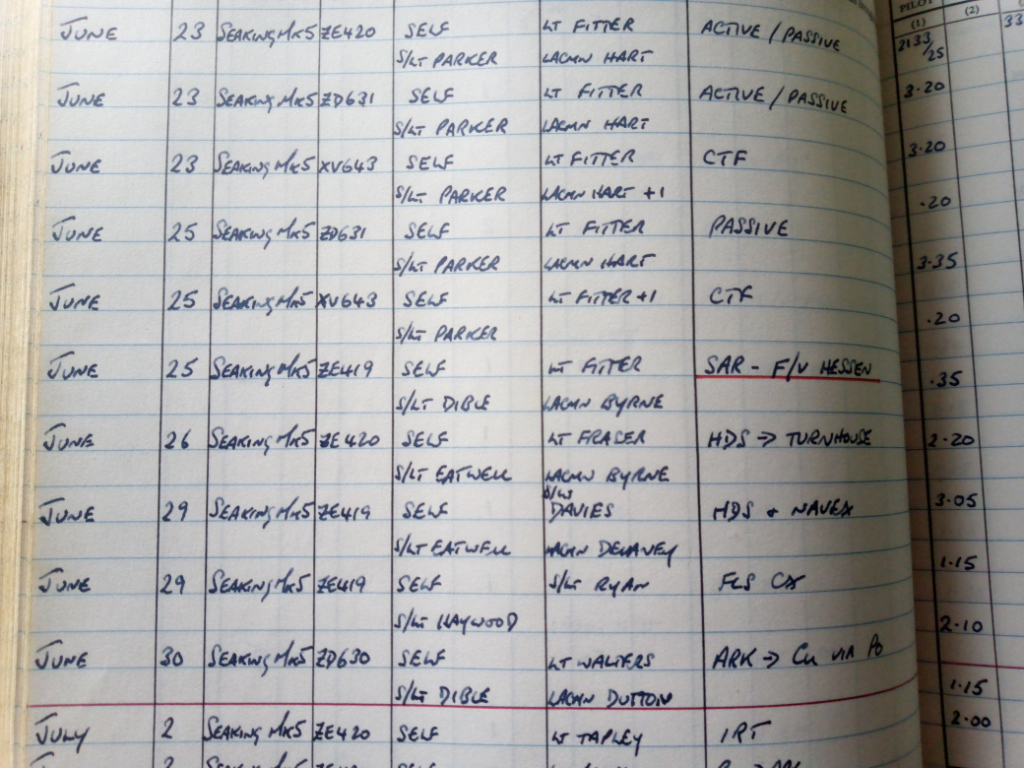