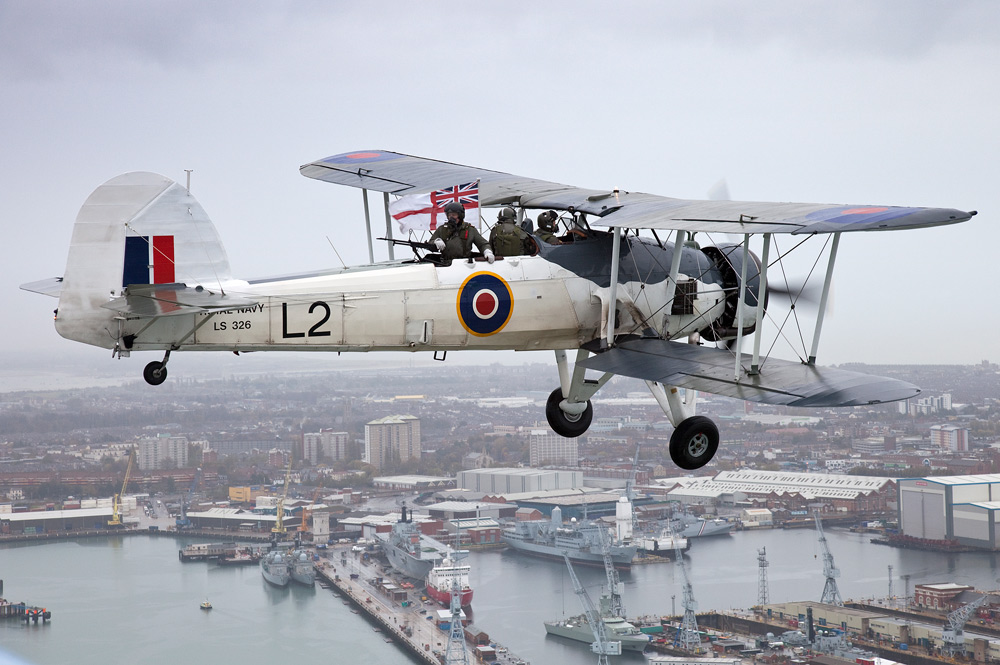 We continue to share stories from Fleet Air Arm legends, this is a story from John Beattie

‘In May of 1991 I was the CO of both Heron Flight (Jetstream T3) and RN Historic Flight (Chipmunks WK574 and WK635, Firefly WB271, Seahawk WV908 and Swordfish LS326). We had been tasked to attend a Wings parade on 24 May at RNAS Culdrose with the Swordfish, but the usual Pilot was busy with his day job, so I took it down with the Flight SMR, CPO Al Morton and AEM Turner in the back. The weather was good and the parade its normal excellent affair and I came on and displayed after the Navy’s newest batch of qualified pilots had been awarded their Wings. Always good to support the young pilots joining the world’s finest flying team. I then flew back to Yeovilton at the ‘Fish’s sedate pace, thoroughly enjoying the view and appreciating the qualities of the aeroplane, it really did fly well once trimmed out and in balance, purring along at about 100 knots.

You can almost start a relationship with the folk you fly over, the aeroplane is big but totally inoffensive and waving to the public almost obligatory. On landing Al stated that he didn’t think the rocker gear on No2 cylinder was moving. I hadn’t noticed anything wrong in flight, either power loss or extra vibration, so I guess it must have occurred after landing or my sensitivity level was at a low ebb. When we’d shut down and clambered out a feel of the cylinders confirmed that 8 were pretty warm and No 2 was cold. A pull through of the propeller confirmed his findings and subsequent investigation showed that the three studs holding the rocker post to the cylinder head had sheared. The powers that be considered the matter and decided that we needed high tensile steel studs to replace those that were in situ, so all cylinders were removed and sent to Fleetlands, who did the job fairly quickly and we soon had the cylinders back. I should point out that on the Pegasus the cylinder heads are screwed onto the Cylinder barrel and a containment ring shrunk on to keep the two firmly together.

Attempting to remover the head later usually destroys the thread, so once flown we don’t do that. The cylinders were then mated to the crankcase again and each cylinders 8 base nuts torque loaded to 20 ft/lbs. The engine was soon inspected, signed up and ready for test flight. Again I was the only chap handy (and very pleased to be too) so did the test flight on 14 June. The mission was to put about an hour’s flying on the engine to bed in the cylinders prior to check torqueing the nuts again and presenting the aircraft fit to display. I had Al Morton in the back again, always good to have one of the maintenance team with you, a) to witness that whatever you thought was wrong really was wrong, and b) to aid the pilot’s confidence that they’d done the best possible job! (that was very tongue in cheek). These were the days when we were allowed to use common sense and Health & Safety was a thing of the future.

We took off and cleared down to the South and then East a little at 2,000 ft or so, once again in beautiful weather. After about 30 minutes there was a muffled sort of bang, the engine began running a little roughly and oil poured out of the Starboard side of the engine cowling, over the pair of us. I throttled back, not having the slightest idea what had occurred, made sure both mags were on (they were), we were feeding from the main tank (we were), ensuring the primer was locked home (it was) and wondering what to look at next, there not being too many knobs and levers to clutter up the cockpit and potentially confuse the pilot! Gauge readings seemed to be all correct. Carefully moving the throttle I found what seemed to be the best setting and started a gentle climb at about 75 knots, having initially lost about 500 ft whilst checking the cockpit. Henstridge (HMS Dipper in a previous life, satellite to Yeovilton) was the nearest place to land so I headed off there, putting out a pan call whilst all the time ensuring I knew where the best field to make a forced landing was.

Henstridge soon appeared under the aircraft and I started a spiral letdown in the overhead, gently reducing power. At about 500 ft I closed the throttle and the engine promptly stopped and LS326 became a glider, and may I say a very good one. Positioning for the one remaining runway (there had been 4 in its heyday) was pretty easy and touchdown perfectly gentle in the serene quiet. I didn’t use the brakes but let it roll to a stop on its own, sat covered in oil and very relieved that I hadn’t had to try and get into a farm field, or for that matter screwed up the ‘deadstick’ landing. Not long after Tony Young, the airfield owner at the time, walked over beaming and shouted up to me “Do you know where you are?”, I replied that of course I did to which he shouted “No, do you REALLY know where you are?”. I wasn’t sure what he was getting at and clambered down to ground level where he pointed out that I had stopped on the square of concrete set on the otherwise tarmac runway,….”you’re right on the dummy deck!”. In years gone by an arrester system had been rigged at Henstridge to gently introduce Seafire pilots to deck landing, but of course the gear had all gone and only the concrete base remained.

Tony then marched me into his somewhat cluttered office and proceed to rifle through tons of drawings, manuals, photographs, books etc whilst I got on the phone and assured Yeovilton that all was well. I also phoned the flight to organise a MARTSU lift home and placate my wife, who was waiting for me in the flight office and would have heard the klaxon. By that time Tony had unearthed a 1940’s photograph of the airfield in its heyday, complete with arrester wires across the runway. The aircraft was recovered the following day on a ‘Queen Mary’ and the cause of the failure investigated. Al and I had seen that one cylinder had lifted about an inch from the crankcase, having no securing nuts left on. It was obvious that 5 of the 8 nuts had come off and the other three had fractured studs. After some excellent high level staff work Rolls Royce were approached and agreed to rebuild three engines for the flight over a period of time. One for LS326, one for W5856, which at the time had just started rebuild at BAe systems Brough and the third as a spare (at the time no-one had organised for NF389 to be rebuilt).

Pete Dean at Rolls took the engine and back torqued the nuts on the remaining cylinders, to find that only a few were anywhere near 20 ft/lbs and some as low as 2 or 3 ft/lbs. Further investigation in the flight led to the culprit who had innocently torqued the nuts using a crows foot spanner, being a small spanner head welded at 90 deg to a long rod so that it could be tightened up from the cylinder head area, all of 10 or 12 inches from the nut which is inaccessible in the normal manner. The lad, I stress in all innocence, had jammed the spanner head between the nut and the cylinder on a number of the nuts and pulled the torque wrench to click at 20 ft/lbs,..job done. He was re-briefed of course but probably left the flight before the engine returned and he could have another go! It certainly did return and was as good as new, every component being at the original manufacturers specification, gaskets, oil wicks, valves and springs being re-manufactured to original drawings to satisfy Rolls Royce’s very high standards. They produced the three engines over a period of some years but then decided it was too costly to provide more in the difficult economic climate of the time, though they did and still do provide direct cash support. Pete was pensioned off and our long term piston engine guru and fount of all knowledge Mike Batchelor was also pensioned off by Rolls, both a sad loss.

LS326 did of course fly again with the ‘new’ engine and was joined in May 1993 by W5856 also with a Pete Dean engine. At some stage after I left the RN in 1994 BAe had offered to refurbish NF389, a Swordfish Mk3 (with the later radar aerial between the undercarriage legs). Unfortunately, although they had made a very promising start to the project, BAe were finding it hard to survive in a very demanding market and they pulled the plug when about halfway through. She now lies in storage in many pieces, yet another aircraft refurbishment project looking for a fairy godmother, or sizeable legacy in a will?’