Tales from The Sea 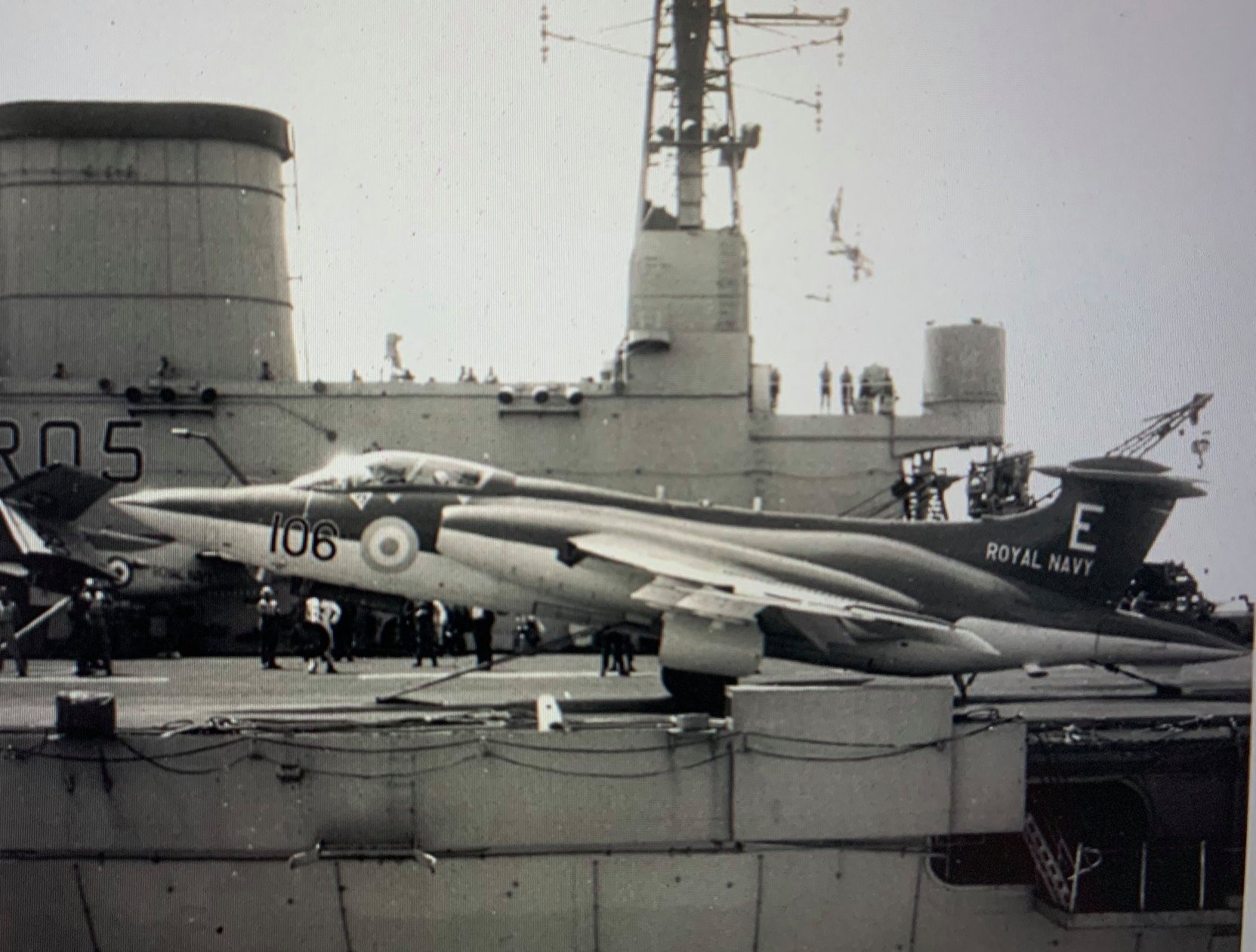 ‘It was a normal day on board HMS Eagle in April 1966. The weather was fine and the ship had been at ‘Flying Stations’ since 0700 that morning. We were flying ‘Non Diversion’ as we were on the infamous Beira Patrol chasing all the naughty Oil Tankers for 72 days that were supposed to be supplying oil to Mr Ian Smith’s Rhodesia. What we were supposed to do when we caught one, nobody knew. The only time we ever got close to one, was the Joanna V. The Skipper accused us of trying to ram him. The nearest we got to her was about a mile away. Our Captain, John Roxborough, signalled her and told her to change course and not to go into Beira. The Captain of the Joana V signalled back with two words, the second one was ‘Off” and sailed merrily on. The Captain was really cross with him and called him a lot of nasty names for refusing to obey the Royal Navy!

The ship had launched a flight of four 800Sqd Buccaneers S1’s on a Search Mission on this day at 1300. The flight deck had been re-spotted, the landing area was clear and for a short while all was quiet while we waited for the Buccaneers to return. Unbeknown to us on the flight deck, there was a major emergency taking place in the air many miles from us. Apparently one of the Buccaneers was having some serious problems. The aircraft had suffered ‘A Double Proportioner Failure’ (so we were later told.) This meant he had lost power, but had enough to reach the ship, but, he would not have enough power to go ’round again’ in the event he missed the wires on his first attempt to land back on board. Therefore the Sqd C.O. and Commander Air made the decision to tell the crew they were to eject. The crew were Lt.Cdr’s. Markley & Chase from the USN. Both were on an ‘Inter Service Exchange’

Once our boss, the Flight Deck Officer, was informed, he got all the flight deck crew together and told us what was going to happen, ie. The aircrew would be ejecting off the port side shortly. The aircraft, in company with one of the other Buccaneers, set course back to the ship. The ships Commander made a broadcast to the ships company over the Tannoy. He announced…

“ Dya hear there? This is the Commander speaking. In about 5 minutes time two Buccaneers will be flying past the ship, roughly a half a mile off the port side and at 2,500ft. From one of them, the crew are going to eject as they are unable to land back on board, that is all.” Of course everybody below wanted to see this. It was a once in a life time chance for 90% of them. Consequently the flight deck in a very short time was absolutely covered in sailors with cameras, binoculars and in all sorts of gear.

True to form, the two Buccaneers appeared flying very slowly toward the ship on the port side. As they came nearer one of them pulled away, whilst the other carried on. Then when in line with the ship the rear crewman ejected followed very shortly by the pilot. We could clearly see the crew each separate from their seats and their parachutes open and both crew floating down. THEN, all eyes turned back to the aircraft. Where, it had been expected that the aircraft would crash into the sea. It had not. It had continued on and had now turned toward the ship and was dropping down heading for the ship and a massively crowded flight deck, with nobody driving it!

Whereas, before when about a thousand sailors had been clamouring to get onto the flight deck. Now there were a 1000 sailors all trying to get off the flight deck. It reminded me of a ‘Mad Movie’. I myself really thought the aircraft was going to hit the ship. Therefore I thought the best place for me was to get behind the Island. I positioned myself very near the rear end of the Island so if I needed to I could run behind it pretty quickly. The Buccaneer kept coming but started to veer off and passed over the stern of the ship. Then it started to climb again. By this time, the two air crew had been picked up by the SAR Wessex Helicopter and were now on the Eagles flight deck watching their aircraft flying around the ship. It was even considered to man the 4.5 Guns aft, to try and shoot it down. The aircraft flew for almost 8 minutes around the ship climbing up and then dropping down, each time getting lower, before finally crashing into the sea off the starboard side about half a mile away. The photo of the unmanned aircraft with the ship below gives rather a wrong impression. It does look like the aircraft is well above the ship and will easily miss it. But I assure you standing on the deck and seeing a Buccaneer with nobody in it starting to come down and toward you. It is not a thing you want to see while on deck.

The picture of the remains of the aircraft is shown below. This was winched up from the sea as it had remained floating after the impact. As a final note on the incident. The only casualty was an 800 Squadron, Chief Artificer. He was so interested in looking at the remains which had been winched back on board. He failed to note how close his foot was. Consequently, as the remains were placed on the deck. He left his foot in the wrong place and almost had it severed. He was rushed down and into the Sick bay. Luckily his foot was saved. But, not his acute embarrassment when both of the aircrew visited him and offered their sympathy.’ 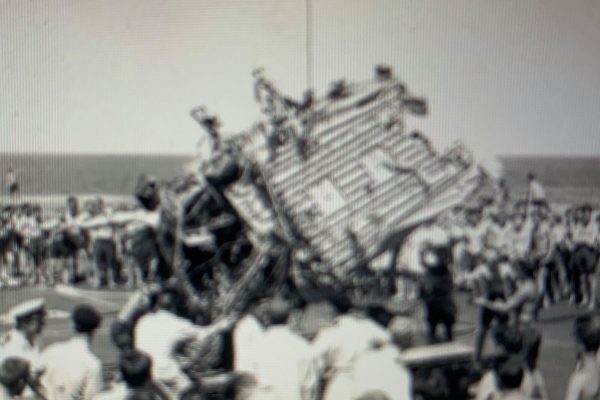 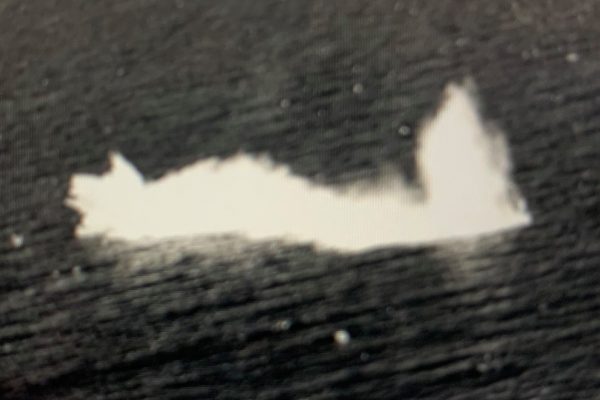 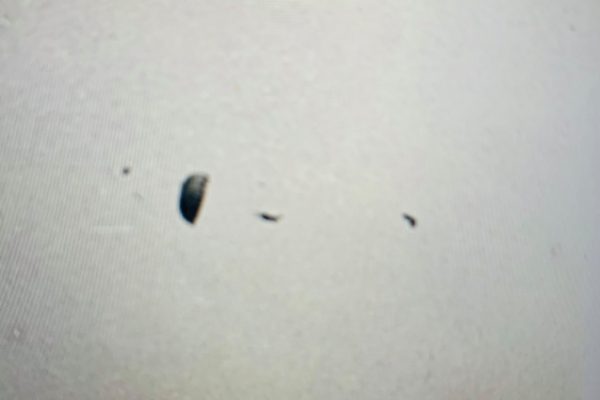