The Battle of the Atlantic

The Battle of the Atlantic was known as the longest military campaign in World War II, lasting the duration of the War and seeing the sinking of over three and a half thousand Allied ships

With a substantial fleet of deadly U-boats, Nazi Germany was attacking the convoys heading eastward from North America across the Atlantic to resupply war-torn Europe.

Over 6 arduous years and often in appalling circumstances, thirty-six Fleet Air Arm Squadrons played a vital role in contributing to the diminution, mastery and then eradication of the German threat. Swordfish, Albacores, Avengers, Martlets and Sea Hurricanes all flew some of the most hazardous missions. Extreme exhibitions of courage in the face of both adversity and enemy action were commonplace.

By February 1942 the UK’s critical lifeline of food, oil and military supplies was in danger of being severed. 30,000 merchant seamen had lost their lives, 100’s of 1000’s of tons of shipping had been sunk and Britain was losing the logistics battle. Failure to maintain this supply line would render us unable to continue the fight in Europe.

The last week of May in 1942 was the vital watershed after which every Atlantic convoy had air cover. Slowly but surely the tide turned and more and more arms, ammunition, fuel, trucks, tanks, aeroplanes, food and troops were able to cross the Atlantic enabling Britain firstly to feed and defend itself and, ultimately, to take the battle back onto mainland European soil. The RAF fought the Battle of Britain – but, for a prolonged and extremely costly sixty eight months, the Merchant Navy, Royal Navy and Allied Forces fought the Battle for Britain.

The unsung heroes who provided the crucial air cover and helped turn the tide of the War were Naval pilots, many of whom joined the Royal Naval Volunteer Reserve (RNVR) at the start of the war, flying the obsolescent Fairey ‘Swordfish’. These flimsy biplanes and their aircrews, with an average age of 21, flew from the pitching decks of merchant ships, in all that the Atlantic could throw at them, including mountainous seas and bitter cold. They patrolled in an area known as the mid-Atlantic gap, the 500 mile wide gap in the middle of the Atlantic, out of range of land based Allied aircraft. Here the U-boats had almost complete freedom to operate; freedom to surface and recharge their batteries and to communicate by radio with their brother wolves, their home bases and their long range Condor bomber aircraft scouting for convoys. 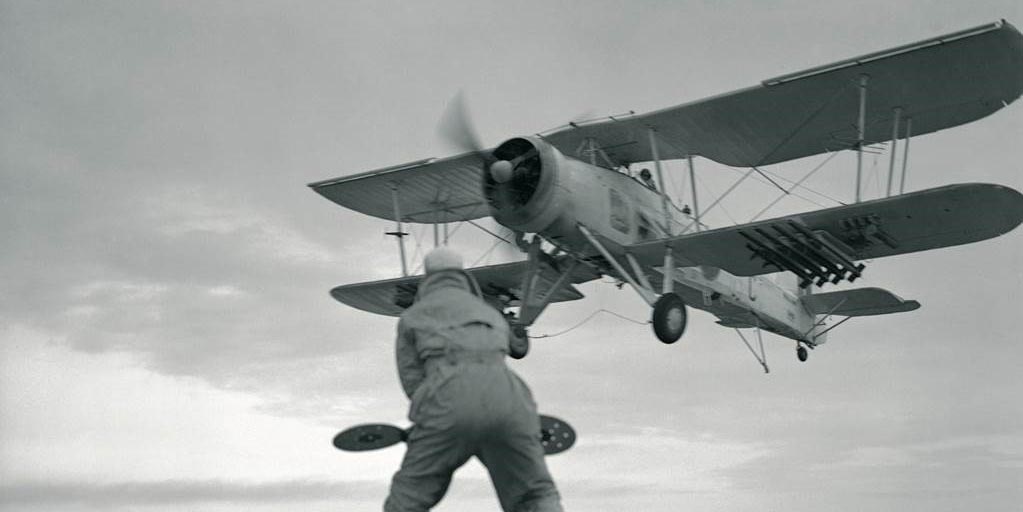 Over 350,000 tons of enemy shipping was sunk by Navy Swordfish aircraft but the statistics on U-boat sinkings only tell half the story. The tactic that made the Swordfish so successful in ensuring the safe passage of convoys was not the number of U-boat kills, but the deterrent effect it had in keeping U-boats submerged.

U-boats had to spend many hours of each day on the surface in order to replenish their batteries. They could travel at quite good speeds and fire their torpedoes very effectively whilst on the surface, but once submerged their weapons and more particularly their diesel engines were almost inoperable. Relying on their electric batteries for power they were restricted to barely three knots and, unless they could surface and recharge their batteries, they were virtually dead in the water and easily detectable by Allied surface units. Patrolling Swordfish were continually in the air from an hour before dawn to an hour after sunset to fully exploit the U-boat’s weakness by keeping it submerged for as long as possible. By so doing, they rendered it ineffective, thereby directly preventing attacks on the convoys. Each Swordfish was armed with eight armour-piercing rockets for attacking U-boats but U-boat Commanders invariably crash dived immediately they saw a Swordfish – doing exactly as the Swordfish crews wanted them to do.

This tactic of defensive Anti-Submarine Warfare (ASW) was particularly successful from early 1943 onwards, when Swordfish aircraft were flying over 4000 ASW sorties a year, but many of the aircrews did not live to see the fruits of the peace they had helped to win. Their extraordinary bravery in the face of atrocious conditions was little publicised. Very often they crash landed back on deck and maintenance crews worked on exposed flight decks in sub-zero temperatures, handling freezing metal by torch light to get the aircraft repaired and ready to take off again at first light.

The lack of escort carriers and the pressing need to provide air cover for the convoys called for innovative and bold measures. The Fleet Air Arm rose to the challenge. Under Churchill’s direction, RAE Farnborough developed a rocket powered catapult capable of launching a fully armed and fuelled fighter from a merchant ship. These Catapult Armed Merchant (CAM) vessels and Naval Fighter Catapult Ships became vital to the war effort but it was the courageous pilots, both Fleet Air Arm and RAF, who volunteered to undertake the task that turned the tide of the Condor threat.

One pilot, Sub Lieutenant David Wright RNVR described his first launch as terrifying. “It was like sitting on an exploding bomb”. The naval CAM pilots were extraordinarily courageous. They took off knowing that on completion of their mission, their only recovery option was either to bale out or ditch in the sea and rely on being picked up by their mother ship or another ship in the area. The first naval pilot to successfully launch from such a ship, shoot down a Condor and survive his subsequent ditching was Lieutenant Bob Everett RN who was awarded the DSO. Nine German aircraft were shot down by CAM pilots keeping the Condor threat at bay until suitable escort carriers and their aircraft became available. Holding our own in the mid-Atlantic gap in the critical weeks of April and May 1942 was an outstanding feat of airmanship and co-operation between the services.

But the U-boat war did not stop there. Between April 1943 and May 1944, six grain carriers and thirteen tankers were converted to become Merchant Aircraft Carrier Ships (MAC ships). Essentially they were merchant ships with a flight deck capable of operating three or four Swordfish or Martlets, naval fighters used to intercept the heavily armed Focke-Wulf Condors.

Britain’s first escort carrier, HMS Audacity, was a converted banana boat. The legendary naval test pilot, Captain Eric ‘Winkle’ Brown CBE DSC AFC described her as ‘tiny’ and her flight deck as ‘terrifyingly short’. Landing-on was precarious, but constant patrols continued regardless, often in filthy weather, with Audacity’s stern regularly pitching as much as sixty-five feet and the flight deck rolling sixteen degrees. Following the loss of his Commanding Officer, shot down by a Condor, Captain Brown famously worked out that the best tactic to intercept the heavily armed Condor was head-on. Closing at speed on a certain collision course he successfully shot down a Condor, holding on until the last possible second before making his attack. He described being ‘close enough to see the windscreen round the two German pilots shatter’. As debris flew off its nose, he took violent evading action to avoid a collision.

The remarkable success of Swordfish defensive ASW operations, the bravery of the CAM pilots and the introduction of escort carriers and MAC ships, together with the work of the scientists from Bletchley Park in breaking the enigma codes, all played a part in the eventual victory. However, the contribution made by the Fleet Air Arm was substantial and should never be forgotten. The Battle of the Atlantic was one of the most protracted and bitterly fought sea and air campaigns in which the British Empire and her Allies have ever been engaged.

The U-boats very nearly succeeded. Without the protection provided by these carrier based aircraft and the bravery of their young RNVR crews, many convoys would never have reached the British Isles with their vital supplies or Russia with their vital equipment. Churchill himself wrote “The Battle of the Atlantic was the dominating factor all through the war. If we had lost that we would have lost everything.”

Many Naval Air Squadrons comprised over 95% RNVR pilots. Most of the young ‘A’ men as they were known, who flew in the Battle of the Atlantic are no longer with us, but two gallant Swordfish remain on the military register, serving as a powerful living reminder of their service and sacrifice and the great victory that they helped to win. The Swordfish is not a pretty aircraft, nor is it fast. It was obsolete even before the war started, yet it was a willing and tireless workhorse and certainly earned the right to be a proud aircraft.