The Final Run In!

Eighty years ago, on the night of 11-12 November 1940, the Fleet Air Arm carried out an intrepid carrier borne strike on the Italian battlefleet at Taranto that was to turn the established rules of naval warfare on their head.

The attack by Swordfish aircraft from the aircraft carrier HMS Illustrious was to be the first time in history than an enemy fleet had been defeated without ever sighting or engaging the opposing ships. It was also the first successful major offensive against the Axis Power in the Second World War.

21 aircraft took off from HMS Illustrious in two waves – twelve launching at around 20.40 and nine an hour later, at 21.30. Heavily laden and flying at the laboriously slow pace of 75 knots, they rumbled through the darkness towards their target over two hours flying time away. One aircraft turned back for technical reasons but 20 pressed on. The four Naval Air Squadrons, 813, 815, 819 and 824 included a mixed Squadron from HMS Eagle. Eleven of the aircraft were armed with torpedoes and the remainder carried flares and bombs.

The first wave of Swordfish began their approach at 22.58, the flare carriers having illuminated the Italian ships, the signal for the incoming torpedo aircraft to begin the long dive into the storm of intensive gunfire that subsequently opened up from every part of the harbour.

The flare droppers took station to the east, behind the balloon barrage, while the striking force of torpedo carriers approached from the west diving down to water level at the far side of the harbour. With the line of flares peacefully floating down in the still night air, the battleships became perfect silhouettes on the calm surface ready for the torpedo aircraft to roar in and deliver their attacks. For the plan to be a success the element of surprise was essential, and for a few precious minutes they thought they might get away with it, but once the Italians realised what was afoot, a barrage of gun batteries opened up from every direction and the torpedo pilots had no choice but to dive into the maelstrom, pick out their targets as best they could, go through the drills they had practiced so often, and hope for the best!

Lt Cdr Charles Lamb, the pilot of aircraft L5B, described the scene, and what a fearsome sight it was. “Before the first Swordfish had dived to the attack, the full-throated roar from the guns of six battleships and the blast from the cruisers and destroyers made the harbour defences seem like a side show.” Into this volcanic eruption of flame and steel the Fleet Air Arm had to descend.

Within ten minutes, the Italian fleet had suffered extensive damage with the battleships Littorio and Cavour crippled, four other ships sunk or severely impaired and two shore installations on fire and out of action. The torpedo carriers were the grandees of the operation, but the dive bombers also had their work cut out. They concentrated on the cruisers and destroyers in the inner harbour and the seaplane base and oil supply depot. The teamwork between the torpedo attackers, flare droppers, and dive bombers was superb, contributing greatly to the effectiveness of the operation. They had not got away unscathed, however, as Lieutenant Commander Williamson and Lieutenant Scarlett in L4A crashed into the sea after attacking the Cavour; both survived and were captured by the Italians.

“My brother, Sub Lieutenant Antony Wray DSC, was an Observer in the first wave” said Pat Pern (97), a Navy Wings Supporter. “I support Navy Wings by donating annually to keep the Swordfish flying” continued Pat. “The battle of Taranto inspired the nation and keeping the Swordfish flying is a living tribute to the young men who flew her and their bravery and determination to succeed whatever the difficulties. They flew into a cauldron that night, but their flying skills were well practiced, and their courage and professionalism, still epitomises the Fleet Air Arm today.” 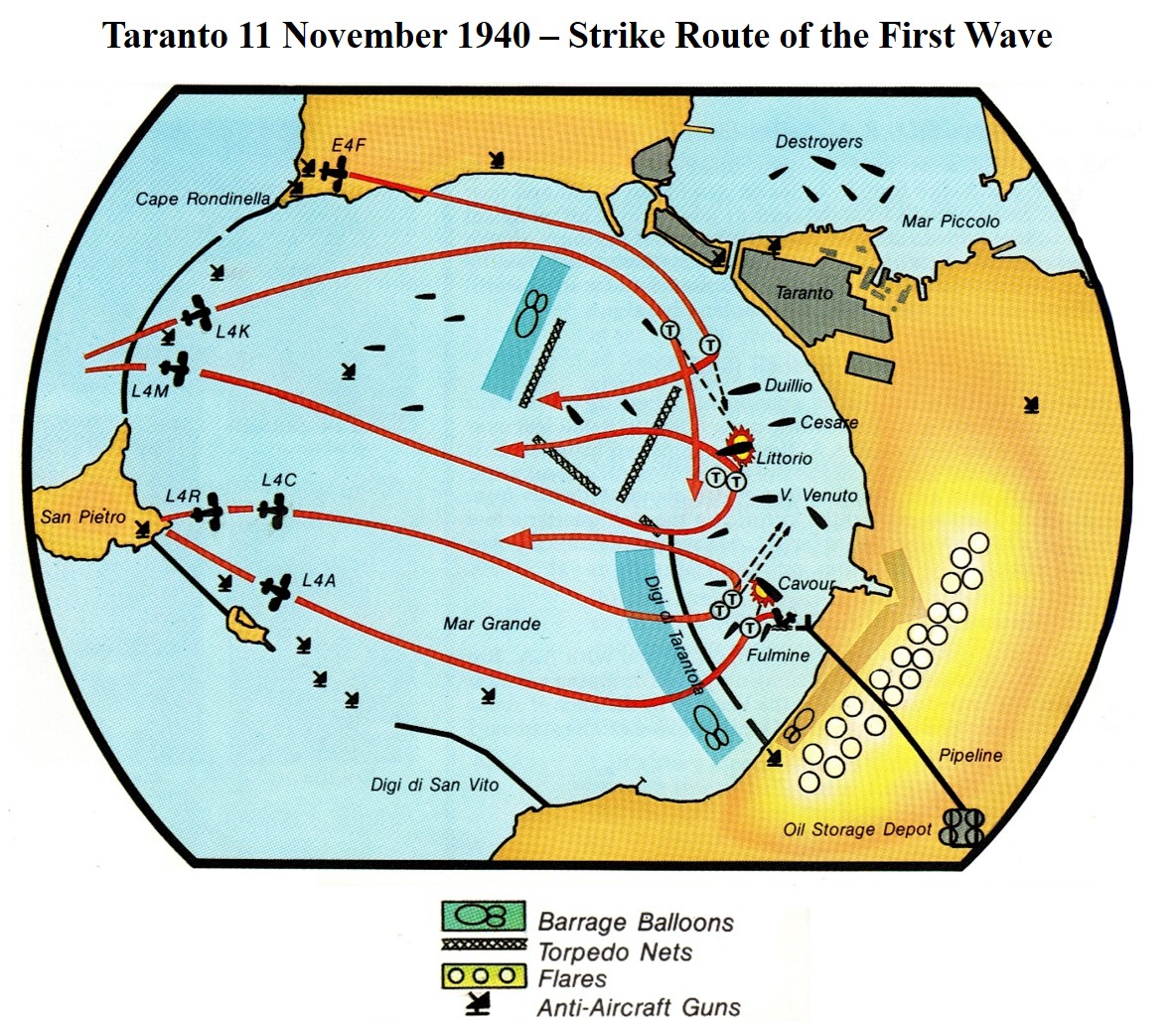 The second wave arrived over Taranto around midnight, dodging the steel cables suspended from barrage balloons and coming under heavy machine gun fire from batteries of anti-aircraft guns. They were only now eight strong, five torpedo planes and three bombers, as one had had to turn back early, its additional petrol tank having come adrift losing the extra fuel load necessary to make the journey.

There could be no question of a second surprise attack. The Italians were ready to open-up with every weapon they had. The spirit, bravery, and doggedness of the second strike was in the finest traditions of the Service. They flew into a ferocious barrage of high explosive and machine gun fire, as one attacked and hit the Duillio, while two attacked the Littorio and another attacked the Vittorio Veneto. In the melee, one aircraft was hit but recovered in time to launch his torpedo, and E4H, Lieutenants Bayley and Slaughter, crashed into the sea with all lost, assumed shot down.

By the time the last aircraft had completed the attack, the first wave Swordfish had returned to circle Illustrious at 01.20. During the next hour and a half, whilst all on board the carrier waited anxiously, the Swordfish came droning back out of the night sky to be gathered in, pretty knocked about certainly, but unscathed and with not a burst tyre between them!

That they had not been shredded to pieces, was testimony to the rugged resilience and manoeuvrability of the aircraft and the skill of their pilots. Lieutenant Welham in EH5 managed to fly his Stringbag home in a dilapidated state making a spectacular landing on Illustrious at a few minutes before 03.00. There was an understandable mix of elation and gloom among the aircrew. The torpedoes had been set to explode deep and few flashes had been seen; and although the bombers had hit their targets fairly and squarely, most of the bombs had failed to go off. The crews felt the operation had gone badly and waited to learn if they were to go back again the following night to finish the job. Time was soon to show that their feelings of gloom were without foundation. In a night’s work they had changed the balance of power in the Mediterranean and the future of warfare at sea, at a single stroke. Against all odds, Operation Judgement had been delivered and for the loss of only two aircraft and two brave members of crew. 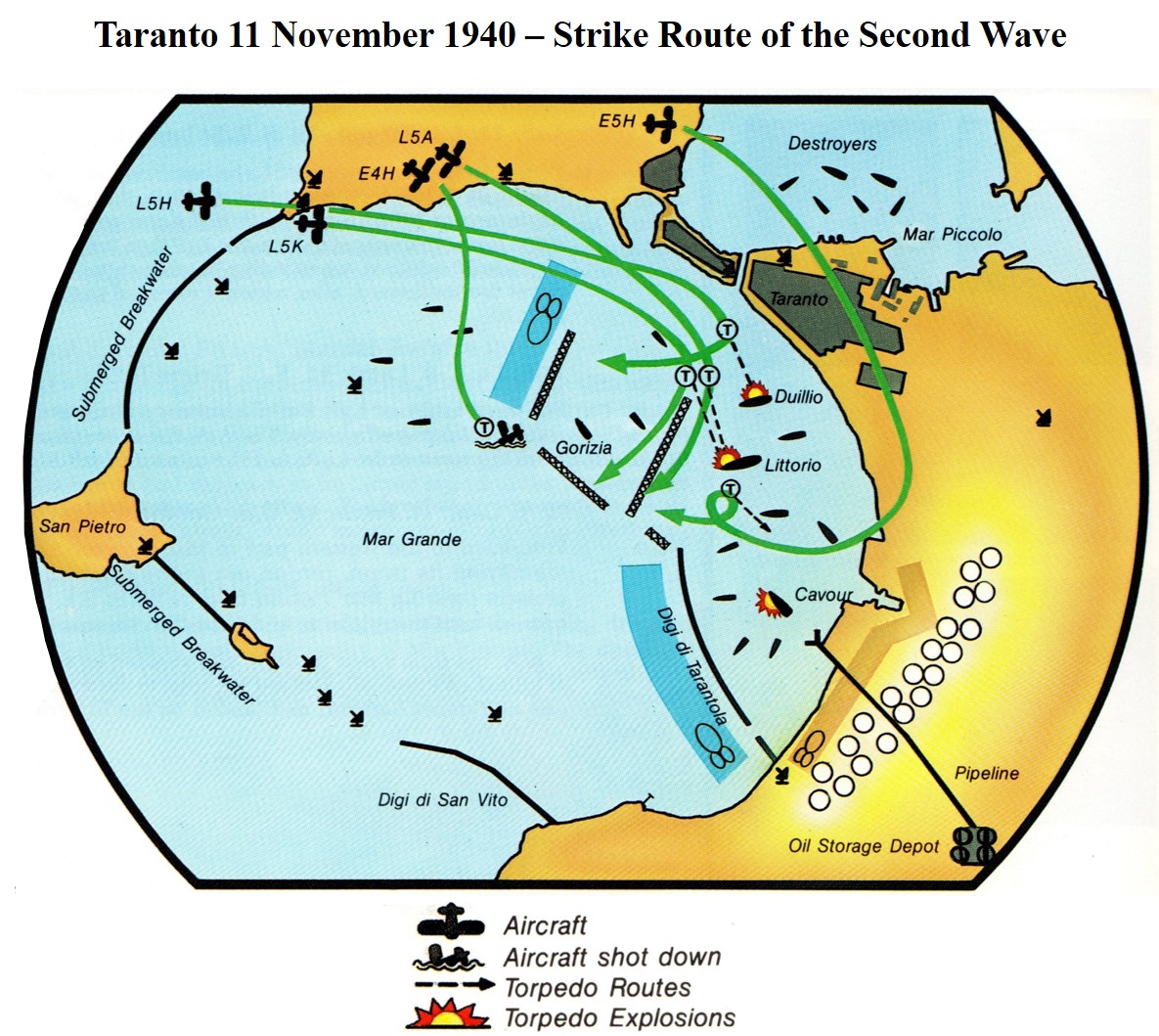