The Other Fellow’s Point of View 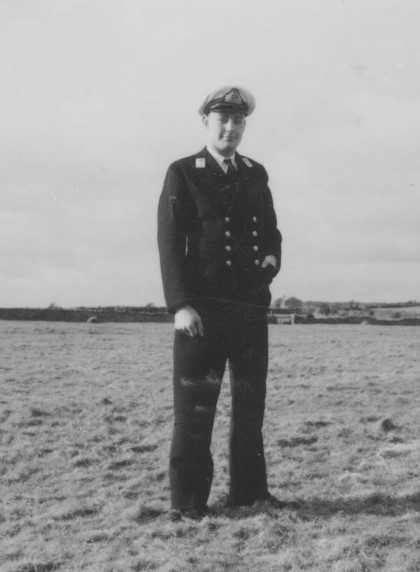 ‘Just a nineteen year old Midshipman and having not long qualified as a pilot in the Fleet Air Arm, I was undergoing my anti-submarine operational training at Eglinton in Northern Ireland, flying the Fairy Gannet. On this particular night I was briefed to carry out a patrol on a filthy, black as pitch night, with torrential rain and low scudding cloud. My two crew were equally newly qualified trainee observers. Our patrol took us eastward from Lough Foyle across to the Mull of Kintyre, then northwest past Islay and Tiree, eventually turning westward again back towards Malin Head on the coast of Donegal. On both sides of the Irish Sea our patrol line ended with a coastline rearing fairly steeply out of the sea and topped, close inland, by high hills, some considerably higher than the three to five hundred feet at which we were frequently having to fly if we were to have any chance of identifying any of the radar contacts we located.

For once my neck was partly in the hands of some one else. Only the recently learned navigation and radar interpretation skills of my trainee observer, Lt. Hawkins, lay between us and the rock filled clouds at either end of our patrol line, for we would fly into them before we saw them on a night such as that. The tension would steadily grow as we drew closer to the land at the end of each east-west leg and it was with no little relief that I acknowledged his instructions each time he passed me a new course to fly, back out across the empty sea. At the end of our sortie we gingerly felt our way back into the entrance of Lough Foyle through the darkness, cloud and rain, on the last leg of our flight home, Ben Ebnah (known to aircrew flying locally as Ben Twitch), off to the left and the hills of Donegal off to the right. I couldn’t help but enquire a couple of times of Lt. Hawkins, was he absolutely certain that he had us lined up correctly on the radar. I just hoped he was as confident of his position as he sounded. A feeling of considerable relief as we slipped between the hills on either side and continued on down Lough Foyle towards Eglinton. At last the airfield lights came into view and I joined the landing circuit. As the wheels splashed gently down into the puddles on the rain soaked runway I reckoned I’d earned my flying pay that day. Thankfully, so too, had Lt. Hawkins.

It didn’t occur to me at the time and only occurred to me some years later, but the flight must have been equally nerve wracking for Lt. Hawkins and Sub Lt. Judd, the telegraphist sitting in the rear cockpit. There they were, sitting in their own little cocoons, illuminated only by the few dimmed red and ultra violet lights necessary to enable them to read their own instruments, their cockpit hoods equally rain spattered, as they stared out into the pitch black of that dreadful night. No doubt they were hoping that the nineteen year old Midshipman sitting up front and driving them around through that black, rain soaked night was, despite his lack of years, sufficiently competent to get them back on the ground in one piece at the end of the night. At least I was fully occupied coping with flying on instruments and still trying to keep a look out outside. Far braver they, in my view, with no choice but just to sit there and get on with their own job and trust to the adequacy of the training their little known pilot had received before their lives were entrusted to his hands. It was a lesson that taught me always to consider any situation from the other fellow’s point of view’