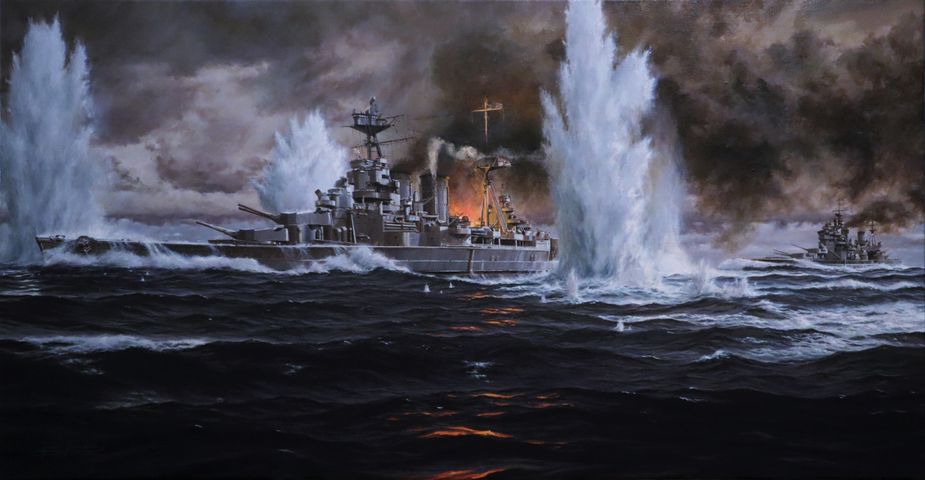 The above image is a reproduction of a painting by Joseph Reindler, Maritime Artist.

On 22 May 1941, the German battleship Bismarck, at the time the most formidable fighting ship afloat, made a break for the open waters of the North Atlantic on a top secret mission, codenamed Operation Rheinubung (Rhine Crossing) to attack the Allied convoys crossing the Atlantic between the United States and Britain with oil, food and supplies.

Bismarck posed a fearsome threat to the convoys, able to do far greater damage than the havoc already being caused by German U-boats raiding the Allied lifeline that kept Britain alive.

Having received reports that Bismarck was loose in the Atlantic Ocean stalking its prey the Royal Navy dispatched a fleet to track down the daunting battleship beginning one of the most dramatic chases and battles in naval history.

Among those in pursuit were the battleship HMS Prince of Wales and the pride of the Royal Navy, HMS Hood. Soon after dawn on 24 May the British ships caught up with Bismarck sailing in company with the heavy cruiser Prinz Eugen in the Denmark Strait.

Hood and Bismarck traded thundering blows and after firing for only four minutes, Bismarck’s armour piercing shells found their mark, ripping through the upper deck of HMS Hood unleashing a huge explosion in her ammunition magazine.

The sailors onboard HMS Prince of Wales watched in horror as HMS Hood exploded. The ship buckled, broke in two and sank in a matter of minutes. 1,415 officers and men lost their lives, only three survived. It was the Royal Navy’s largest loss of life ever from a single vessel.

The shock of the loss of the Hood was keenly felt not just in Britain but around the world.

“We were struck dumb. We couldn’t believe it” said Navy Wings Supporter, WW2 Swordfish veteran, Laurie Allum (100) who was flying U-boat patrols in the North Atlantic at the time.

“It was so sudden and such enormous loss of life” continued Laurie. “The Battle of Britain had been won but we were still fighting the Battle of the Atlantic. If Hood could not stop the Bismarck what could? It was no surprise that Churchill said: ‘Bismarck must be sunk at all costs.’”

Although striking a catastrophic blow, Bismarck had not escaped unscathed. She had been hit near the bow causing fuel tanks to rupture and a serious oil leak.

Prinz Eugen was detached to continue the mission independently, and Bismarck with her speed reduced to 28 knots to conserve fuel, considered whether to double-back to Germany or head south to France and a German occupied port for repairs.

Tenaciously shadowed by the two cruisers HMS Norfolk and HMS Suffolk, and with all available ships in the British Home Fleet now converging on the area, including four battleships, two battle cruisers, two aircraft carriers, three heavy cruisers, ten light cruisers and twenty one destroyers, the pursuit to sink the Bismarck before it could reach the safety of land and Luftwaffe aircover was now on! 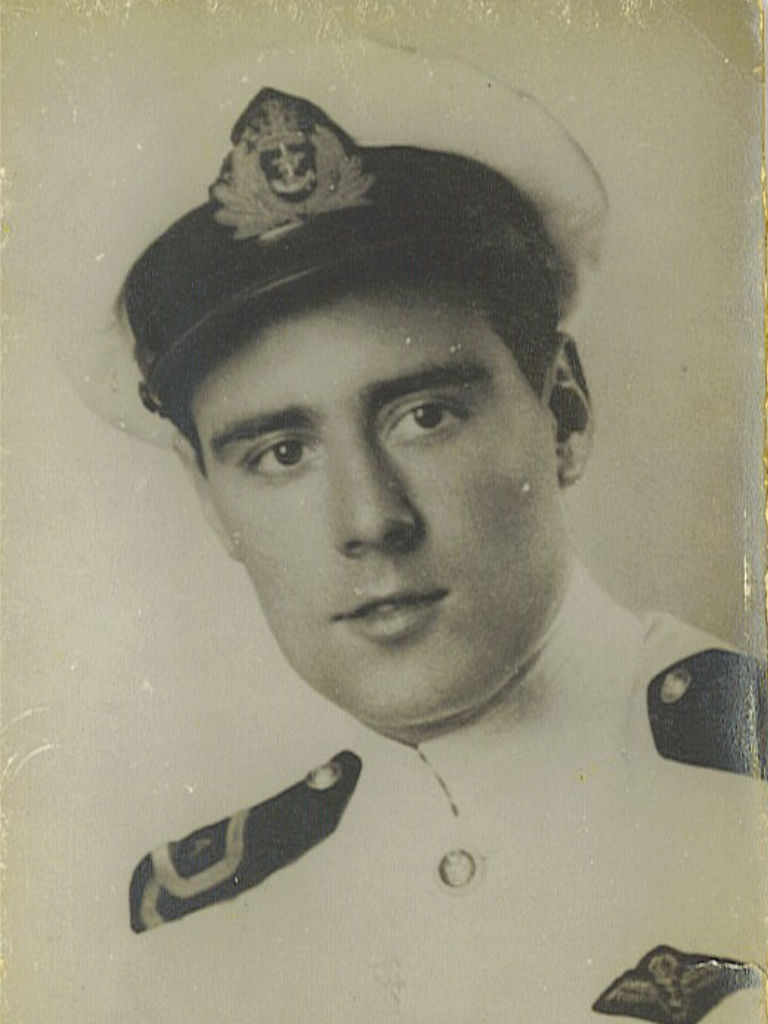 WW2 Swordfish veteran Laurie Allum (100) was flying Swordfish patrols from Machrihanish when HMS Hood was sunk. We were struck dumb. It is difficult to find the words to describe it. Utterly dreadful. We were very shaken. If Hood could not stop the Bismarck what could? We were not surprised when Churchill sent the message: ‘Bismarck must be sunk at all costs.’” 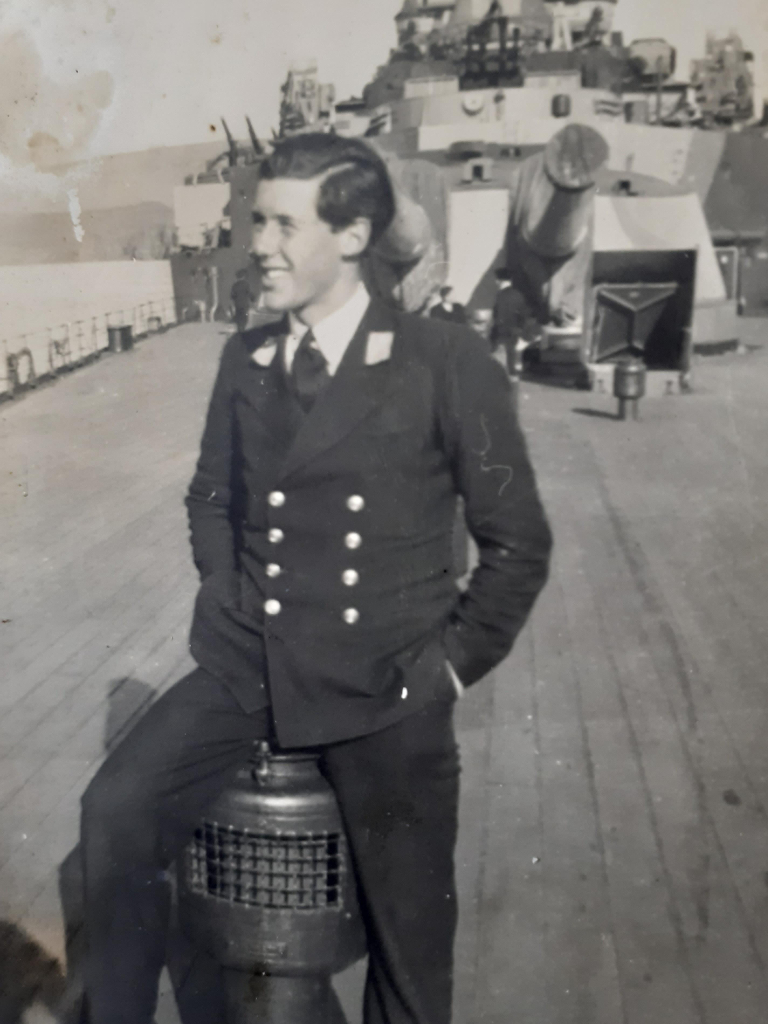 Rear Admiral John Roberts CB (97) the last surviving Captain of HMS Ark Royal IV (RO9), pictured as a Midshipman in HMS Renown in 1941, was at Dartmouth when HMS Hood was sunk. “She was a much loved ship. There were only three survivors. One of them, Midshipman Bill Dundas, was a friend of mine. He was 6 months older than me.” 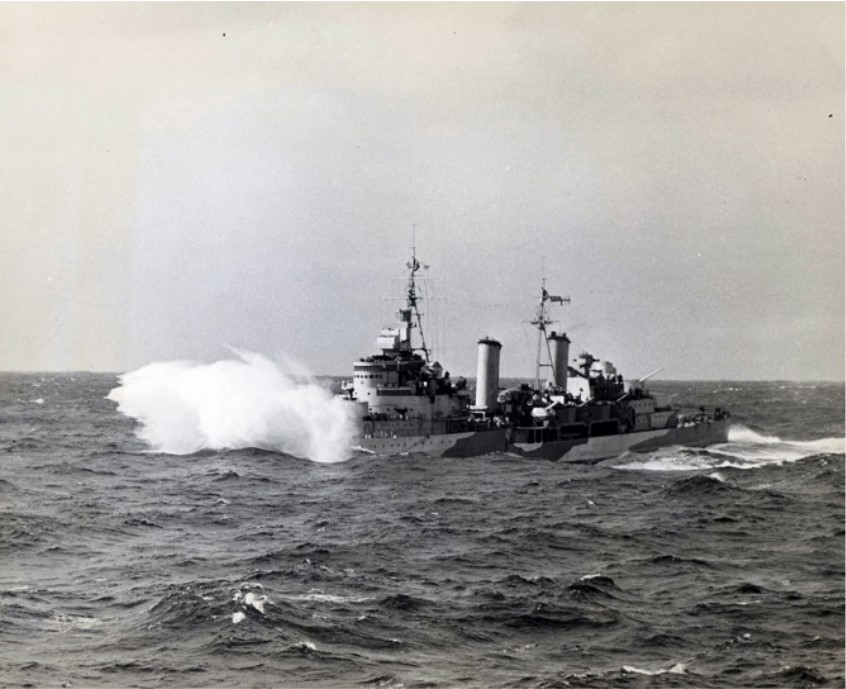 Nazi Germany’s most powerful warship, Bismarck was a massive floating gun platform, heavily armoured and secretly exceeding the tonnage limitations set by international treaty. Her presence in the Denmark Strait in May 1941, the fierce encounter with HMS Hood and HMS Prince of Wales and her violent end three days later, made Bismarck a household name during the Second World War and the subject of considerable literature and the famous 1960s film ‘Sink the Bismarck.’

The above image is a reproduction of a painting by Joseph Reindler, Maritime Artist. Joseph saw our coverage of the 80th Anniversary of the sinking of the Bismarck and contacted us. We are honoured that he has chosen to share his painting with us.

‘With respect to HMS HOOD and the Bismarck action I was wondering if you might like to use the below image, my new painting of HMS HOOD and HMS PRINCE OF WALES, Engaged at the Denmark Strait action. I am the artist who created the work – and it was timed deliberately for the 80th anniversary of the event it depicts. The painting is oil on linen and sized 1050mm x 550mm; it is entitled: “HIS MAJESTY’S SHIPS HOOD AND PRINCE OF WALES, Engaged off Iceland, 0600hrs May 24th 1941 – ‘The Final Sacrifice’ – At The Battle of the Denmark Strait.” The glow of the fire on HOOD’s boatdeck reflects a holy cross on her main topmast & yard, giving title to the piece. If you would like to use the image, for whatever purpose, then you are very welcome to do so.’ 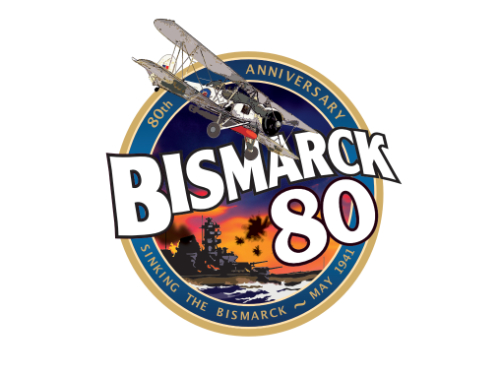