The Ships’ Position Is 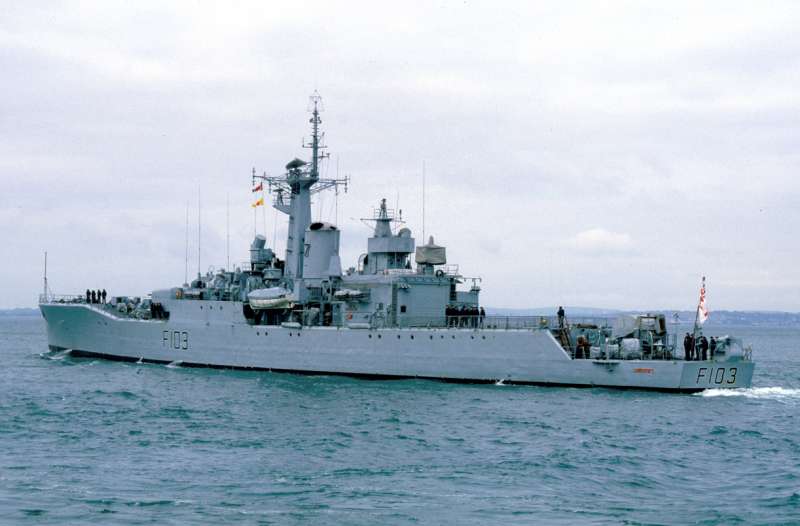 ‘A dit about a situation that is at the core of the dangers of naval aviation. It’s about one of the greatest lies in the world, not ‘the cheque is in the post’ no, it’s ‘the ships’ position is’. It is also the reason for the first verse of the A25 song.

HMS Bulwark and an 814 Squadron Sea King somewhere in the Atlantic. I am up front, the Observer is Captain of the aircraft. The brief – fly about 75 miles to the west and find HMS Lowestoft who is doing towed array trials in a fixed geographical box. Came back four and half hours later.

Off we go and find Lowestoft no problem. We then spend several hours doing passive towed array support work and then it’s time to go back to mum. We consider HIFR but the ship isn’t capable for some reason and anyway the carrier can’t be far away. We set off on a north east heading. Bearing in mind that the ship was due east of us and heading north at take off, this is the logical direction to go. Nothing on radar so we climb to 6000 feet and there, just where we expect it, is a nice big fat radar echo. Time to relax and consider what movie is on in the mess tonight. We mosey on for a while, looking out for mum. Definitely something there. Get a bit closer. ‘Er, you know that bloody great aircraft carrier we are going to? It looks just like a large merchantman.’

Silence as it sinks in. The relaxed atmosphere disappears in a second. Where the hell is the ship? At this altitude we only have one radar contact and it’s the one ahead of us. All sorts of things shoot through your mind. How much fuel have we got? Where actually is the bloody ship? Can we get back to Lowestoft?

Get onto HF and call her for a position. It takes a few minutes but we eventually make contact on the HF and get a position about eighty miles to the south. What the hell? No time to worry about that, we have a problem and two options – try to get back to the ship or go for a swim. I personally am not happy with option two as it would mean my second swim away from a Sea King in less than a year.

You may remember all those lecture about flying for range and endurance that you dozed through in various crew room briefs? Suddenly, it was starting to seem rather important. Looking at the figures and the wind direction there was only one thing to do. We put out a PAN call because we were going to have to go low and might lose radio contact and then headed for the deck and sped up to max chat as this should give is maximum range into wind. Now it was only a waiting game. Would we see the ship before the fuel gauges said it was too late? To keep us occupied we went over ditching drills so we would all know what to do if it all went wrong. On this trip we had an RAF passenger. He was our passive sonar expert and had come on the trip to see towed array operations for himself. He really enjoyed the brief!
Eventually we got into VHF range as well as seeing the ship on radar at last. This was going to be tight.
On the ship they had turned towards us and gone to full revs. Apparently the stokers were actually holding the safety valves down and the ship was going faster than she had in many years. Would it be enough?

If I remember correctly Minimum Landing Allowance in a Sea King was 160lbs of fuel, ie 80 lbs a side. Whatever it was, we were within two miles of her when the gauges were reading the magic figure. Were we going to ditch so close to Mother? Were we b****cks! It must have been one of the quickest approaches and landings ever but we got on deck and actually shut the engines down ourselves. As the rotors stopped I worked out that we had done five hours exactly on 5000 lbs of fuel. It’s in my log book so must be true. I seem to remember that in those days using 1000lbs an hour was the rough planning figure but we never expected to use it all!!
Into the quiet came a call over the flight deck tannoy. ‘Observer of Sea King on two spot – ops room.’ Now there was a surprise.

The conversation in the ops room was interesting to say the least. The ships staff were all for blaming us until the magic question was asked – did you maintain your MLA for the last five hours or did you deviate at any time? Er, yes, oops, er yes maybe we did turn at one point. WAFUS one, Fisheads nil.’

This story is from Larry Jerram-Croft