The Times they are a Changing 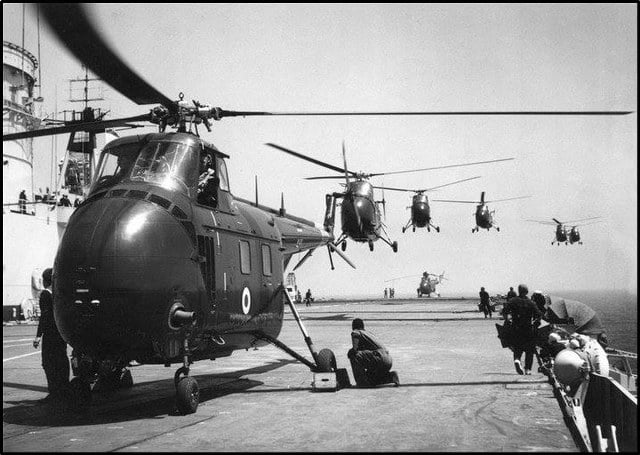 ‘When, in 1952, I was fortunate to be commissioned for training as a pilot in the Fleet Air Arm; as an ignorant Landlubber residing some 50 miles from anything naval, other than the history of heroes up to Nelson, including Hornblower; and of course Biggles. I was completely unaware of the dramatic post war changes that were afoot, especially in my chosen career, flying from an Aircraft Carrier.

I think that until WW2, the Royal Navy had regarded the Aircraft Carrier as a rather minor element in naval operations. Few Dartmouth trained Officers saw a career prospect in aviation. A Seaman Officer, with your own Battleship was the prime aim.

However, the war saw the enormous potential of the Aircraft Carrier in every element of warfare at sea, from defence of the Fleet to Offence against targets ashore, and at sea, far beyond a Battleships guns. No enemy slept easily if a Carrier lay over the Horizon.

The Royal Air Force had long been the main inspiration for military aircraft Manufacturer’s, until nearly the end of the war The Royal Navy been equipped with aircraft that were not the choice, or underperformed, Airforce requirements. There is little doubt that The Fleet requirements are specific and very different in nearly every respect to those of the RAF. Towards the end of the war some producers had recognised this and began to specialise in Naval requirements.

The Navy’s role was essentially at sea, so our Carriers had to be larger to accommodate and operate the more sophisticated aircraft that were heavier and faster than of old. Highly volatile high octane gave way to more economical and safer fuels for the new Jet and Turbojet aircraft expected on the deck. Landing on an ever moving deck, heavier, faster (and much more expensive) aircraft required an improved system of approach and landing in the still extant `wires`. The mirror system solved the problem.

In 1952, I, a callow youth in my brand new Aviation Cadets uniform, joined the Training Carrier at Portland, largely ignorant of any of the above. It would be 4 years for me, with bright, shiny `wings`, before any of this new Navy became reality, and I became remotely useful to Her Majesty.
With the retrospective dreaming, granted to the aged, I now look back on a fairly unique career that didn’t follow the usual path of a navy pilot. I followed the standard Ab Initio course at RAF Syerston but on the last course to fly the Percival Prentice and Advanced flight to `wings` qualification in the last North American Harvard Flight, both destined for obsolescence, superseded by the piston and jet powered Percival Provost. Fighter conversion was in the De Havilland Vampire T22 with the Seahawk to follow. High altitude stuff where the close combat techniques practiced were soon to give way to Missiles.
I failed to qualify the advanced air to air gunnery, but must confess I lacked interest in the high altitude operations under Ground Radar Control, where a pilot will probably never see the target he is ordered to fire at; followed by instructions to recover to Base; still under Radar control, until the Runway appeared and the landing was made. There were many times of course, in bad weather, when I welcomed such loving care.

I was re-appointed to the Anti-Submarine world, and remain convinced that the first 5000 feet or so are the most interesting.

I’m sure that Biggles and his gang would have agreed with me.

I was demoted to flying training in the obsolescent aircraft of the anti-submarine Squadron, based in Northern Island. It was the fearsome Fairey Firefly, with a deadly reputation that it `did not suffer fools gladly`.

Perhaps one of the most successful aircraft in the Fleet Air Arm, it had served the Navy well through the war and came in several different Marks.
I was to fly in Mk. 5, still fitted with guns, and the Mk.6. both were equipped to hunt and destroy Submarines. They were feisty planes with a powerful RR Griffon power plant that needed handling with respect. To suddenly slam a throttle wide open caused an immediate surge of power to the propeller. Take-off could see the aircraft, tail up, happily swing through 90 degrees and charge off across the grass to join her mates back in Dispersal; — I have photos to prove it! —but not guilty m’lud. Another wrecked Firefly in the mud, 50 yards short of the runway, showed, for years, where a pilot suddenly applied full power and paid the price for `getting `too slow and too low`.

Up to April 1955 I had only flown in one current service aircraft, all the others had been obsolescent types nearly as old as I was. However on passing out from the Anti -Submarine School, I was posted to Culdrose, in Cornwall, to 825 Squadron, newly commissioned with Fairey Gannet AS1. At last, a Front Line pilot with a brand new Gannet to fly. Alas, it was not to be. The squadron was there but not the Gannets; they were slowly filtering down from the makers. All was not lost as there were aircraft available that pilots would use to keep in flying practice —- it was the Firefly Mk 7! —-I was back with the `oldies`.

The Gannets finally arrived, and 825 worked up, followed by 9 happy months flying a `gentleman’s aircraft `with two engines and a NOSE wheel, and when embarked on HMS Albion, with a MIRROR approach, an operational tour to the Far East.

In May 1956 we returned to Culdrose, decommissioning in August. September I joined 751 Squadron to prepare for the H-Bomb tests in the Pacific. What was my sturdy steed to be? —- A Grumman Avenger, first in service in 1941 when I was 9 years old. My destiny, to eventually, in January 1957, land on HMS WARRIOR, an old WW2 Carrier, with a narrow straight deck and batted landings; due to proceed to the Pacific in early 1957 as part of `Operation `Grapple`!

On return, with preferential appointments offered, my request for a Helicopter conversion was granted and I subsequently joined RNAS Eglinton, Londonderry as a pilot in the Search and Rescue Flight. Yet again to find that elderly S.51 Dragonfly’s were the Unit’s aircraft.

As we were sited alongside the Anti – Submarine Training Unit, they took the opportunity to `modernise`, a somewhat reluctant me, by qualifying me on the Whirlwind Mk7, now becoming the main FAA Submarine hunter as the Gannet was phased out of that role. This Helicopter was certainly up to date, but was already showing some very nasty habits particularly when, in the hover, the engine was prone to take a brief rest and deposit helicopter and crew in the sea.

But at least I was qualified on a later model than usual, but still SAR, and relocated to Portland as such when RNAS Eglinton closed. However, I was a `marked `man and when 815 Squadron, outbound for the Far East, lost a pilot recalled to the UK, I received an emergency posting to make up numbers. On return I joined 700 Squadron testing various projects that were being evaluated for future use by the FAA, including the feisty little Saunders Roe P531 Helicopter; that shed its tail rotor; terminating my flying career in 1961.

The patient reader will have noticed that, in my entire career, I only flew in 2 Front Line and 1 future Front Line prototype in my whole time as a naval pilot. All other postings were to small, largely independent flights with only a few pilots, and their gallant crews, carrying out specific tasks.
Once over the fright factor, that a wary pilot always has when sitting in a new cockpit for the first time, I really enjoyed all the `oldies`, rather as I imagine, the cavalry officer treasures the mount he will train; and also the unusual appointments that I was privileged to undertake.

Whilst I bemoan the impersonal, computerised aspects of modern aviation, I must admit to the benefits of the personal Computer, in particular `delete, erase and backspace`. Without Microsoft word, my memories would be JUST memories; to stay with me forever, until that ‘Final Approach for Landing. Three Greens; Flaps and Hook down’.