This way to Culdrose 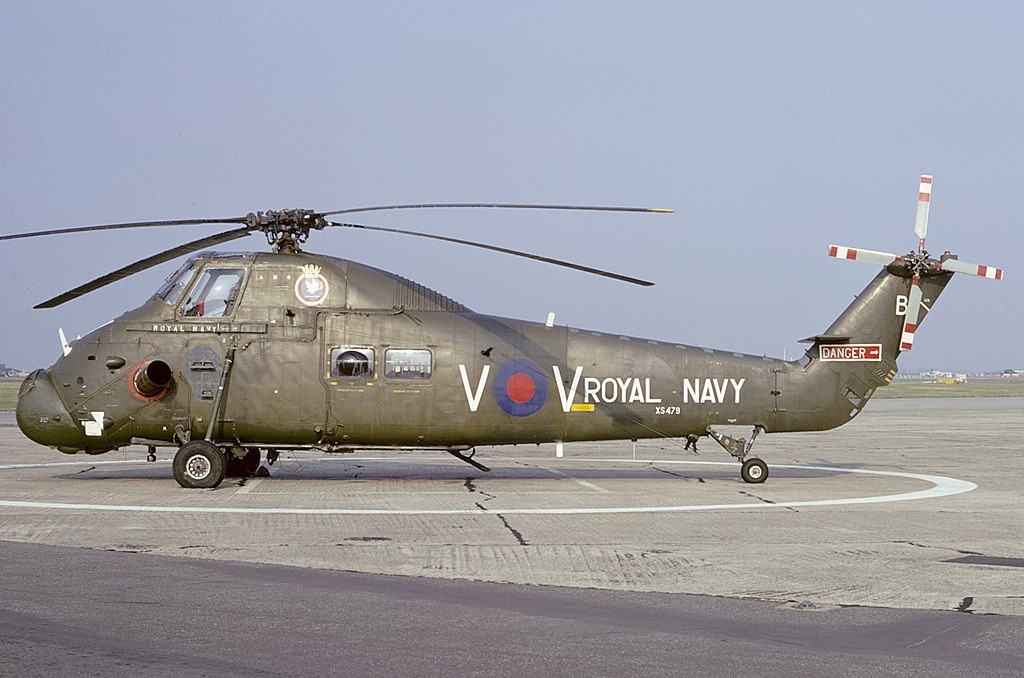 Near the end of my Naval service, in 1966, I spent some time as an armourer on 848 Naval Helicopter, Commando Squadron at RNAS Culdrose, Cornwall. 848 were specially trained and equipped to cross-operate with the Royal Marine Commandos and the Army’s Royal Artillery. We often deployed to Lympstone, the Marines base in Devon, and to Salisbury Plain for exercises with the army, in preparation for our deployment to Borneo where there was a serious conflict going on at the time.

On one particular occasion, we were at an army base at Old Sarum in Wiltshire, where we had lifted the guns and men of the Royal Artillery from their base to a big exercise on Salisbury Plain. When it was all over and we were about to take off to fly back to Culdrose, I realized that our pilot, the Senior Pilot of the Squadron was flying without an Observer, so I thought I’d ask permission to sit up-front in a nice comfy seat next to him with a panoramic view, instead of inside the helicopter amongst all the equipment and sweaty bodies. The only problem was the Senior Pilot for some reason didn’t like armourers. However, I also knew that the Senior Pilot was dead keen on men volunteering for aircrew, which was something fairly new back then, and he usually went out of his way to help them, even if they were armourers.

I put my improbable story, of wanting to be an aircrewman, to the Senior Pilot, who listened with a pained expression on his sour-puss face. Finally, he said “Very well! You can ride upfront with me, providing you navigate us back to Culdrose, here’s the map.” As I put on my flying helmet and throat microphone and strapped myself into the Observers seat, I realized I was probably about to make a tit of myself. I knew very little about navigation but guessed that anyone who wanted to be an air-crewman would probably at least, know which way up to hold the map.

As we were the last of the seven helicopters to take off, I hoped we would just follow the other six, but the pilot said “Give me a course for Culdrose.”

Using the map and a ruler, I managed to give him a course, which he told me was “Wrong.” Just then there was some radio traffic and the pilot lost interest in me for a while but quite quickly he tapped the air-speed indicator and said: “Give me an E.T.A. (estimated time of arrival) for Culdrose.” Again, I got it wrong, as I’d forgotten about the thirteen-knot headwind he’d told me about when we took off.
The difficult questions kept coming and I kept getting the answers wrong and began to wish I’d just sat in the back of the chopper and gone to sleep like I usually did, sweaty bodies and all. However, after a while, I noticed that we were flying over the very familiar territory of Dorset and Somerset. I’d been born in the west of England and had spent, (some say miss-spent) my youth tearing around the area below us, on a 125cc BSA Bantam motorbike. The idea came to me that I may be able to use a good old Navy subterfuge to stall the pilot’s persistent questions. In the Navy at that time, was a saying and a practice, known as ‘Bull **** Baffles Brains.’ Simply explained it meant that, when asked a question you didn’t know the answer to, you prevaricated, or talked bull **** to hide your ignorance.

So, before the pilot could ask me another question, I tried bull-**** baffling brains, and said “Well Sir, as navigator, can I point out that on our port side about fifteen miles distance, is the Dorset town of Lyme Regis with a walled harbour, known as the Cob, which was built between 1825 and 1850, and also ahead on the same side is Rousden which is very famous in these parts because in 1890 a stretch of the coastline three miles wide and over twenty miles long slumped into the sea. At the time, it was known as the Great Rousden Landslide, but is now known simply as ‘The Landslip, and …” “Meecham!” the pilot hollered, “Shut up! You’re supposed to be a navigator, not a Cook’s tour guide. If I want to know where we are, I’ll ask you, until then, keep silent.” So I had to admit bull **** doesn’t always baffle brains.

We flew on in glum silence for a while until the radio called our attention to a bank of dense cloud ahead that we would have no option but to fly through. The formation of aircraft opened up and within moments we entered the white-out blindness of the cloud bank.

We flew on blindly with my knuckles getting whiter and whiter as I gripped the seat. Intently I glared at the map, but the names and features blurred into a sweaty panic as I realized I hadn’t got a clue where we now were and I was supposed to be the navigator. I knew that sooner or later the pilot would ask for a ‘fix’ and I’d have to say “Somewhere over Somerset, or maybe Devon, or could be Cornwall.” However, just then, I saw ahead, on my side, a slight glimpse of the ground, through a vertical, shaft-like hole in the clouds. As we passed over the hole, I saw some fields, a river and then a long factory roof, with painted across it in huge letters ‘AXMINSTER CARPETS.’

Before the pilot could ask me, I pretended to do some calculations on the edge of the map then volunteered “We are now passing over the East Devon town of Axminster, which is, of course, famous for its carpets and are following the main road towards Honiton,” I consulted the map as if calculating the distance, “Seven miles distance and then Exeter at twenty-four miles.” The pilot looked startled then said, “You’re wrong again,” then after a pause, he added, “but you’re not far out.” I thought, he’s heard of that old Navy saying too, whose bull shitting who around here?

Shortly after we flew out of the clouds into glorious sunshine and clear visibility for zillions of miles and for the rest of the trip the pilot left me alone, content, I imagined, that he considered I knew what I was doing. When we landed at Culdrose, the Senior Pilot said to me “Put your request in for air-crew and I’ll see you get a course.” As for bull**** baffling brains, worked for me in the end!