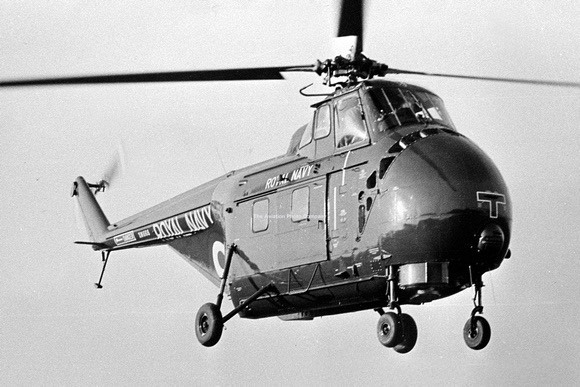 Having read Dave Warren’s “dit” about the use of Correct RT Phraseology, I submit this little tale as a warning to others to be rather circumspect with their radio transmissions when operating at sea. Names and dates have been omitted, purely to protect the innocent, or even the slightly guilty.

Around the time when the Whirlwind 7 was the front-line A/S helicopter, (so clearly some good few years ago), a young but reasonably experienced helicopter pilot was instructed to fly ashore from the carrier to enable some items of maintenance to be carried out. The last of these was for the rotor blades to be tracked and adjusted if required. In those far-off times, this was done by chalking the rotor tips with different coloured chalks and proffering up a canvas flag on a pole so that the rotor tips could gently touch it in succession. Different blade tracks could then be noted and suitable adjustments made.

All this completed, the ground crew and their tools were loaded back to the helicopter. On returning to the carrier, the pilot was instructed to land on, in a small vacant space on a distinctly crowded flight deck, just astern of the island. This necessitated flying through the turbulent air created in the lee of the island itself and the hot funnel smoke. After three attempts, the pilot found he had insufficient power to affect a safe approach and touch down. At this point, rather than have an unintended collision with the ship’s side, he radioed Flyco to explain his problem and request either an alternate landing spot or, distinctly tongue in cheek, to ask for the ship to be turned out of wind to clear the nominated landing spot of turbulence and hot funnel smoke, an unheard-of thing for a landing helicopter pilot to do!

Two things are worthy of note at this juncture. The Alvis Leonides engine in the Whirlwind 7 was a distinctly temperamental and unreliable piece of machinery, leading to many ditchings and the pilot’s trepidation at the manoeuvre he was being required to perform. It is also worthy of note that following a recent Turn Round of launches and landings, there were numerous fixed wing and helicopters being shunted around a crowded deck, in preparation for the next sorties, with the accompanying image of slightly disorganized chaos. Also, as part of the carrier’s work up, she formed part of a small flotilla comprising three additional frigates and an RFA, all steaming in company. Nevertheless, our helicopter pilot was not a little surprised to see the ship swinging gently to port, leaving reasonably smooth, clean and smoke free, air sufficient for the landing, which he swiftly accomplished.

Having done so, he was a little taken aback to see both the Squadron C.O. and Senior Pilot come racing up the flight deck, to demand of him, “What the hell do you think you were doing, asking for the ship to be turned. That could be the cause of all sorts of operational problems?” Our pilot explained the difficulties he had experienced whilst attempting to land and that he had first requested an alternative landing spot; it was someone on the bridge who had determined the turning of the ship. This explanation was promptly derided. When our pilot suggested that, despite it not being his intention, perhaps it was still preferable for the ship to be turned, rather than risk crashing a helicopter with four people on board, and the additional risk of crashing into other aircraft in close proximity to the designated landing spot. The C.O. then remarked that perhaps one reason for our pilot’s dilemma was that the aircraft was over loaded to more than its permitted maximum all-up weight. This was subsequently proved not to be the case.

At this point our pilot, conscious of his lowly status in the great naval hierarchy, thought it unwise to question any further the decisions of the watch keeping Ship’s officers on the bridge, who were ultimately responsible for the actual orders to alter the ships heading. With the flotilla now steaming happily in formation along its designated course once more, our pilot decided that his best course of action was to maintain a dignified silence. This, however, failed to pacify his C.O. who confirmed his displeasure at the whole incident, with the immediate summary award of a week’s extra Squadron Duty Officer.