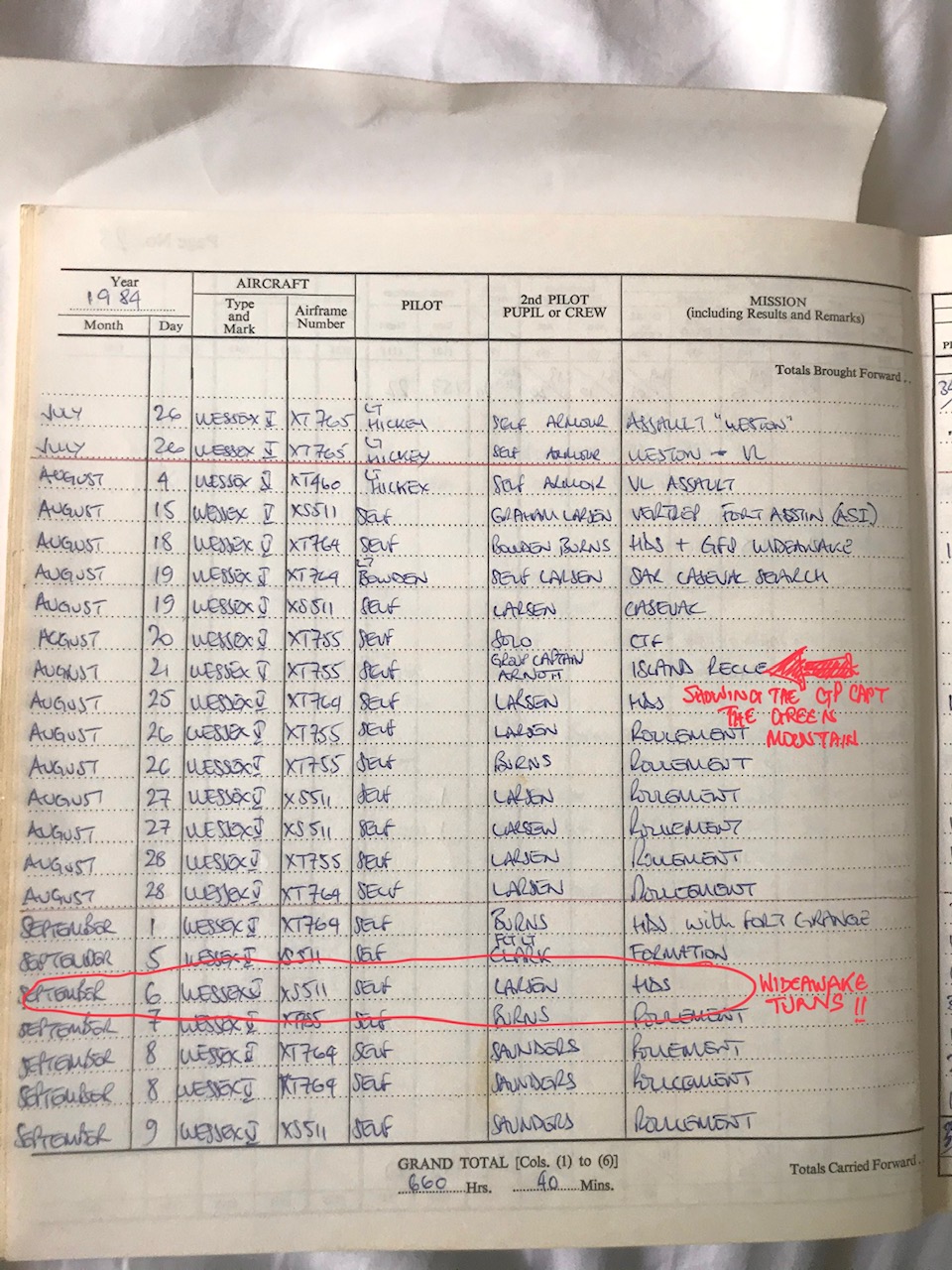 ‘In 1984, I was a first tour junglie on 845 and very much learning my trade. The squadron still had the Ascension Island roulement job whilst the big runway was being built at Mount Pleasant in the Falklands. Every 10 days a VC 10 and a Hercules landed at Ascension and offloaded lots of soldiers and their kit. Meanwhile a ship arrived from the Falklands with a similar amount of kit and bodies, on their way home. We had three Wessex Vs and 3 days to swap the two groups. There was no harbour so it was all deck landings and load lifting. There were 3 pilots, 3 aircrewmen and about 15 maintainers to keep it all working. Hard work and great fun, then a week to recover!

Between roulies we operated one helicopter a day to supply the MV Maersk Ascension, anchored just offshore to refuel the roulie ship and anyone else who needed it. We supplied their crew with mail and fresh food every day and we also offered an ad hoc SAR during daylight hours. As the only helicopters on the island, there were usually other jobs and jollies for VIPs which the duty crew carried out. Apart from 845 NAS personnel, there was a small Naval party with Senior Naval Officer in charge, an irascible LtCmdr we rubbed along with. And of course there were about 2,000 crabs for the Victor tanker squadron, a Hercules squadron and god knows what else. And a thrusting Group Captain in charge.

On that fatal day, it was another glorious morning. I launched with the Maesk’s supplies and having dropped them off, I went to recce a beach where an old anchor had been found. We wanted to see if we could help lift and recover it to the airfield. After that I was to fly a journalist (I know, always an error!) and show him the sights, Green Mountain, the rocky coasts and moonlike flatlands. It was as we approached the latter, that I remembered our joining briefing; nesting birds at this time of year, don’t low fly near them. So I pulled up to a safe height just as a flock took off below me. I was well clear and they seemed happy enough. Moreover, there were a couple of people waving at us so a banked over them, making that fabulous thwacker-thwacker sound and politely waved back. I thought no more of it until I landed back at Wideawake.

I was met by the SNO, who was apoplectic. I’m 6’5” and he was 5’ something and bright red in the face as he screamed at me and wagged a finger in my uncomprehending face. Most of it was “endangering your crew, aircraft, dangerous flying, cowboy aerobatics” but then he said, “and another thing, the Group Captain and the 2nd Sea Lord (a very keen twitcher) had spent 3 hours crawling down to the Widewake Turns.” Just as the Chief Crab said “we keep helicopters away from here”, I turned up, made lots of noise and then waved at them. The terns took fright, and as we all do when frightened, crapped all over the place including all over the admiral and Group Captain.

The RAF wanted to court-martial me and take away my wings. They thought their Flying Order Book, signed by all pilots on joining, prohibited flying near the turns. It didn’t but it bloody did a couple of days later! My boss, Pete Bowden, just laughed at me and did so for a week. My punishment was to hose down the aircraft, a horrible job because of the thick red dust that coats everything. Our chaps had so enjoyed seeing SNO shout at me, they gave me a brew and efficiently washed the cab as we discussed which was the best beach.

To be fair to the Group Captain, he calmed down a week later and once I’d bought him a beer and offered to pay his laundry bill, he saw some of the funny side. Of the Admiral I heard nothing. But I did become a Wasp pilot next, and have the dubious honour of having 2 aircraft and two ships (Aurora and Rothesay) scrapped beneath me. I hope he remembers the birds fondly. I certainly do’.